By Ben Schneiders and Royce Millar 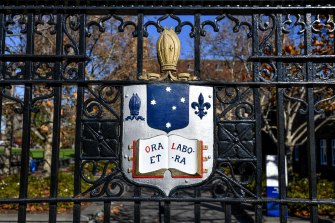 Private schools’ assets have jumped by more than 40 per cent over four years.Credit:Joe Armao

The total value of assets of Australia’s top private schools soared by more than 40 per cent, or $2.5 billion, between 2015 and 2019, helped by rising school fees, alumni donations, a building boom, surging stock-market returns and taxpayer assistance.

An investigation by The Age and The Sydney Morning Herald has calculated for the first time the full extent of the assets of the top 50 private schools across Australia. They are now worth $8.5 billion and the 42 per cent growth easily outstripped both the national housing market and the ASX200 index for the same period.

One school alone, Shore School in Sydney, is now worth more than half a billion dollars.

Many of the most prestigious schools also report surpluses – what would be described as profits if they were businesses. The combined surpluses of the top 50 schools – which are run as not-for-profits and pay no tax – was $397 million in 2019, boosted in some cases by returns from the schools’ sharemarket investments. Between them these schools also received $1.03 billion in public subsidies in 2019, raising new questions about fairness in government education funding. At least 13 of the schools made larger surpluses in 2019 than they received in government funding for the year.

The analysis of the finances of hundreds of schools by The Age and Herald uses the schools’ assets to measure their financial position, and does not take into account what liabilities they have.

The analysis shows the richest are largely the older, establishment Protestant schools. The bulk of them are all-male or co-educational, whose alumni have often been prominent in politics, business and law for more than 100 years.

They include Geelong Grammar, Scotch College and Melbourne Grammar in Victoria; Knox, Shore and the King’s School in Sydney and the Anglican Church Grammar (known as Churchie) in Brisbane. There is also a smattering of mid-tier Catholic and Islamic schools.

Details of the schools’ assets are recorded in filings with the Australian Charities Not-for-profits Commission which in recent years has required reporting of such information. Before then, schools’ wealth was largely opaque.

Many of the schools are spending tens of millions of dollars on facilities. In Sydney, Cranbrook has started a $125 million redevelopment of its senior campus, including a 50-metre underground swimming pool, and Scots College in Sydney is planning a $29 million library in the style of a “baronial” Scottish castle.

“It’s gobsmacking that these schools claim they need public funding when they have these extraordinary stores of wealth,” said University of Sydney professor of education history Helen Proctor. 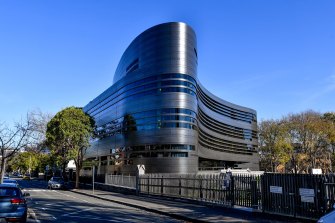 “I think the idea of displaying wealth has become more important this century – a building that looks like a space station and looks cutting edge – it’s a marketing exercise,” she said. “There’s branding all over the place. Ex-students want their names all over things.”

Jordana Hunter, education program director at the Grattan Institute, said there can be benefits for students at both government and private schools from having classmates from a range of socio-economic backgrounds.

“School is one of the places where we learn about people who aren’t like ourselves. If we let our schools become too segregated, we are really missing out on the opportunity to build a more coherent and tolerant society.”

The Morrison government’s policy is, over the long term, to reduce Federal government payments to schools deemed over-funded and increase its contributions to underfunded schools. The stated aim is that all state and private schools have adequate public funding to meet their students’ educational needs.

Ms Hunter said the government funding system had in the past not been based on need.

“It’s a good thing that we’re moving towards a more coherent needs-based funding system, even if it looks like we won’t get there until 2029 at the earliest,” she said. “There’s a small cohort of elite independent schools that have done very, very well out of government funding.”

“We need to move on from the tired ideological debates over funding and class warfare in our schools,” he said. “Children attending one of the higher fee Independent schools attract a fraction of the (government) funding that kids who attend government school or low fee Catholic or Independent school do.”

He said the government had “locked in record school funding, agreed with all states and territories, that is fair and gives the most support to those schools and children that need it most.” 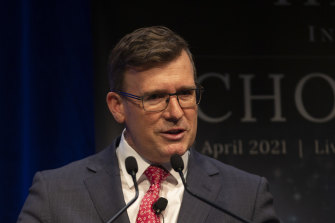 Mr Tudge’s office directed The Age and Herald to a 2018 National School Resourcing Board review into school funding that did not support linking a school’s wealth to funding. That review noted that a school’s assets “may not reliably indicate the parents’ or guardians’ capacity to contribute to the costs of their children’s education.”

“Successful capital fundraising campaigns (for new facilities) are often the result of a small number of parents and supporters contributing most of the funds for these facilities,” the review said.

A spokeswoman for Scotch, Victoria’s wealthiest school, said its recent growth was mainly due to the construction of two new buildings – a science centre and a design technology centre. Previously the school said it taught science across three different buildings dating to the 1960s, and one of the buildings in which it taught design technology dated back to the 1920s.

“Scotch College takes seriously the charge of developing its campus in step with understanding of how students best learn,” a spokeswoman said.

The school’s recurrent public funding reflected government formulas taking into account the financial capacity of parents, he said. “Our funding is around 25 per cent of government schools and around 50 per cent of the average of independent schools.”

Mr Grutzner, a board member of the private schools’ lobby group, Independent Schools Australia, said without the public funding school fees would need to rise.

He said not all Melbourne Grammar families came from a wealthy background and about 300 students received scholarships, bursaries or other fee assistance.

“However, they value education and they work extremely hard towards giving their children the best educational experience and opportunities they can,” he said.

“Many of our families sacrifice a lot to pay the school fees and we never take for granted their interest and support.”

Cranbrook declined to comment on its funding sources or building program. 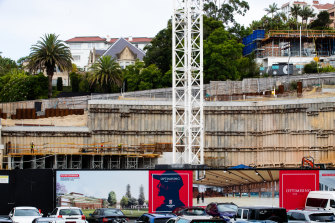 The analysis shows the top 20 schools are slightly wealthier in Melbourne than Sydney.

Opposition spokeswoman Tanya Plibersek said all schools should be funded by need. “That’s not what the Liberals are doing – they are starving public schools of much needed support,” she said.

“Under Scott Morrison, every private school will reach its fair funding level, but most public schools never will.”

Professor Proctor said the elite schools were particularly “visible” and influential in Melbourne with some schools dating back to the wealth boom of the gold rush.

“Sydney has always had the selective public high school sector. Both Sydney and Melbourne have strong cultures of elite private schooling but Melbourne has a bit of a stronger history.”

Every Victorian Premier since the mid-1950s has been educated in a private school, including high-fee private schools and lower-fee Catholic schools.

The Victorian Supreme Court is dominated by private-school educated judges. Politics and business are more diverse but private school backgrounds heavily feature there as well. Four of the last 10 prime ministers were educated in public schools.

Centre for Policy Development fellow Chris Bonnor, a former high-school principal and public school advocate, said there were important questions to answer about whether the wealth of top private schools improved educational standards in Australia.

“Of course parents have the right to pay as much as they want,” he said. “The bigger issue is to what extent governments should be party to arrangements that are exacerbating inequalities.”

Mr Bonnor said measurable outcomes for schools which enrol students from similar backgrounds were “much the same” across all schools, government and private.

“But the amounts spent to get these similar results can be very different. It’s hard to justify the huge total spend, including the government portion, on high-fee private schools. The public dollars should go to schools where it will make a difference.”

Do you know more? Send a confidential message to [email protected]