London: Two-time Australian Open winner Boris Becker is facing jail after he was found guilty of hiding assets in a bankruptcy case.

The former Wimbledon champion, 54, was found guilty on four counts of transferring hundreds of thousands of pounds to other accounts after he was declared bankrupt in 2017 over an unpaid £3 million ($5.25 million) loan on his estate in Mallorca. The charges include removing property, two counts of failing to disclose estate, and concealing debt. 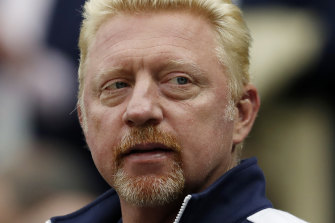 Boris Becker at the Wimbledon Tennis Championships in London in 2016Credit:AP

He could face a jail sentence of up to seven years for each count.

In a bid to hide money from his creditors, Becker transferred around £350,000 to nine recipients including Barbara and Lilly Becker, his former wives, hid his ownership of a luxury villa in his native Leimen, Germany, where his mother resides, and failed to disclose a £620,000 debt and his stake in AI firm Breaking Data Corp. 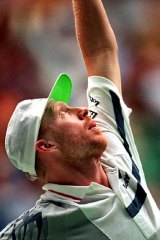 Boris Becker in action at the 1996 Australian Open.Credit:Jack Atley

Despite his financial woes, Southwark Crown Court heard that Becker spent around £40,000 on an ankle operation at a private clinic, paid more than £10,000 to a private jet company, and splashed out £5,000 at a luxury golf resort in China.

The father of four, who was a resident in Monte Carlo and Switzerland before moving to the UK, made £950,000 from the sale of a German Mercedes car dealership that was paid into a business account used as his “piggy bank” for personal expenses.

The expenses included £7600 on children’s school fees, almost £1000 at Harrods, and payments made to Ralph Lauren, Porsche, Ocado and a Chelsea children’s club.

However, Becker was acquitted of a further 20 charges, including nine counts of failing to hand over trophies and medals from his tennis career.

The six-time Grand Slam champion told jurors he did not know the whereabouts of the memorabilia, including two of his three Wimbledon men’s singles trophies, including the 1985 title that catapulted him to stardom aged 17.

Becker was also cleared of failing to declare a second German property, as well as his interest in the £2.5 million Chelsea flat.

The former world No. 1 told the jury his £38 million career earnings were swallowed up by a divorce from Barbara Becker, his first wife, child maintenance payments, and “expensive lifestyle commitments” including his £22,000-a-month rented house in Wimbledon, south-west London.

Giving evidence, Becker said he earned a “vast amount” during his career, paying cash for a family home in Munich, a property in Miami, Florida, and the estate in Mallorca.

But the German, who went on to coach current world No 1 tennis player Novak Djokovic, work as a commentator and act as a brand ambassador for firms including Puma, said his income “reduced dramatically” following his retirement in 1999.

Becker said he was “shocked” and “embarrassed” when he had to declare bankruptcy. He was found guilty under the Insolvency Act by a jury.

Judge Deborah Taylor released Becker on conditional bail ahead of sentencing on April 29.