During this year’s federal election campaign, Solomon Islands became a Big Deal. You’ll recall the Solomons had just signed a security deal with China, the air was thick with concern that China would eventually establish a military base there, and Penny Wong accused the Morrison government of “the worst foreign policy blunder in the Pacific since the end of World War II”.

Since then, the Albanese government’s narrative has been one of righting such blunders; touring the world and mending relationships that were damaged mostly by Morrison government incompetence. In some cases, that seems a fair enough explanation – see the handling of AUKUS and French submarines. But in the Solomons case, this always seemed a stretch, more rhetorical than real. And now we’re starting to see this. 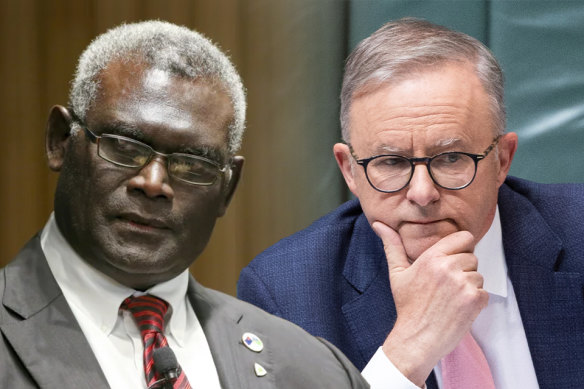 Relations between Solomon Islands and the new federal government have, at times, been tense.

This week, Solomon Islands Prime Minister Manasseh Sogavare made an official visit to Australia. Such a visit, with the respect and gravity it confers, is also a Big Deal: a chance to discuss serious policy matters at a time of precarity and tension, but also to roll out red carpets and perform several gestures of unity. One of which is typically a joint press conference. So, it seems a moderately sized deal that Sogavare has refused to participate in one.

It’s a fair symbol of the way Sogavare has always related to Australia: hot, cold, occasionally lacerating, sometimes conciliatory, frequently with a dig. In the 2000s, when the Solomons government invited the Australian military to establish peace and order via the RAMSI program, Sogavare attacked it as a violation of Solomons sovereignty. Then, when RAMSI left in 2017, he cried as he thanked Australia for saving the country.

When he first met Anthony Albanese in Fiji in July, they hugged warmly in front of the cameras, and he spoke of Australia as “family” and declared Australia the Solomon Islands’ security partner of choice. Then, last month, when Foreign Affairs Minister Wong publicly offered to help fund the country’s upcoming elections – which Sogavare has controversially postponed – he called the offer “an assault on our parliamentary democracy” and “direct interference by a foreign power in our domestic affairs”.

A fortnight ago, he stood up at the United Nations and decried the West’s “intimidation” of Solomon Islands over the China agreement. Needless to say, the new government hasn’t smoothly won him over. 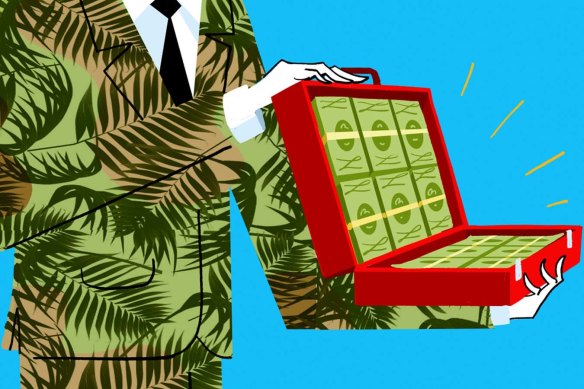 And we shouldn’t expect otherwise. An unfortunate implication of Labor’s attack on the Morrison government was that it suggested Sogavare’s warming relations with China were, to some large degree, about Australian policy. Only, that overlooks that Sogavare likely has his own reasons for taking this stance that have nothing much to do with us at all.

Clearly, he returned to power in 2019 with a plan to swing Solomons foreign policy behind Beijing. His decision – known as “the switch” – to recognise China’s claims over Taiwan officially, came amidst all manner of local opposition, and even cost him his deputy prime minister, as well as education, planning and police ministers. But throughout, he has remained steadfast.

The temptation here is to see this as a Sogavare quirk, explained either by some weird idiosyncratic psychology, or base corruption. But there’s a far more mundane possibility, which is that the world is changing, and Sogavare sniffs an opportunity he’d be silly to pass up.

Think of it this way. Solomon Islands is a tiny, post-colonial state that has Least Developed Country status with the UN. It has basically no tourism industry, and relies mostly on logging, mining and agriculture. But it has something else to sell, which is common to such small states: it can sell its own sovereignty. This is why small island countries often become tax havens, sell passports, or let others fish in their waters. And, in a more pointed way, it’s why the United States has “free association” agreements with several Pacific islands where the American military rents land, builds bases, and can move freely throughout the territory in exchange for lots of money. 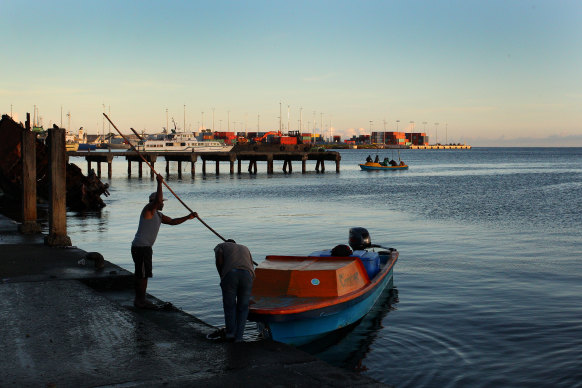 Selling your sovereignty in this way can be lucrative. But it was always limited by the fact that there was only one superpower in the market. Then, China entered it. The imperatives for China are obvious, given the region is dominated by US military presence. But the imperatives for states like Solomon Islands aren’t much harder to decipher. China creates competition which means that if you’re considering selling some aspect of your sovereignty, you can now think about extracting a greater price. Put simply, you now have a growth asset.

These are big, geopolitical tectonic plates at work. A genuinely Big Deal. It’s not quite true to say Australia is powerless to do anything about it. It’s more a matter of what kind of power. We’re set up for soft power, which is why our instinctive response is to increase aid and restore ABC broadcasts to the region. But if this turns out to be a hard calculation about sovereignty sales, then we’re suddenly in a bidding war with a superpower. That’s more America’s domain than ours, and here there have been missteps beyond our control. America responded to the Solomons’ decision to cut ties with Taiwan by threatening to cut aid. Only now is it rushing to open a new embassy in Honiara.

No doubt, Sogavare’s switch has been domestically controversial in Solomon Islands. So there’s every chance this dalliance with China ends with him, whenever the next election finally takes place. But there’s also every chance the terrain has changed decisively, and someone else will emerge at some point who sees things a Sogavarean way. Or that the same problem will simply show up elsewhere. Kiribati, perhaps, which cut ties with Taiwan at the same time as the Solomons, has just signed 10 trade agreements with China, and this year withdrew from the Pacific Islands Forum – under Chinese pressure, if you believe the Kiribati opposition.

All of which is to say, we’ll need a lot of patience and some tempered expectations. These are the symptoms of a seismic moment in world history. They’re obviously concerning for as staunch a US ally as Australia, partly because they aren’t under our control. And with the breathless rhetoric of an election campaign now behind us, perhaps that’s an overlooked principle that should guide more of our thinking: that perhaps we aren’t quite as big a deal as we think we are.