A gun salute echoed off the hills of Canberra on Sunday after Governor-General David Hurley proclaimed the accession of King Charles III with a formal pledge from Australia to offer “faith and obedience” to the new sovereign.

Hundreds of spectators gathered at Parliament House and some called out “God save the King” when the governor-general swore loyalty to the new monarch, officials raised the Australian flag to full-mast and the Royal Military College band played the royal anthem. 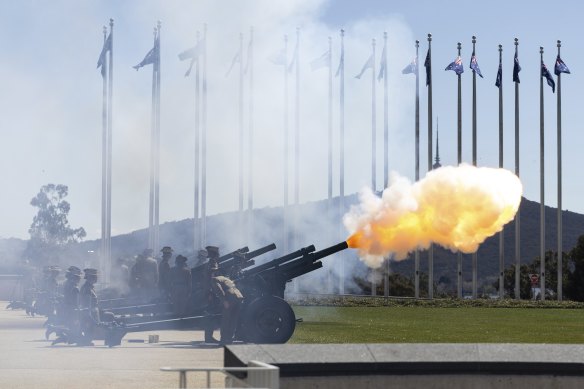 A 21 gun salute during the proclamation ceremony for King Charles III in Canberra on Sunday.Credit:Alex Ellinghausen

The ceremony itself was an echo of a proclamation made elsewhere when members of the Privy Council had stood before King Charles on Saturday at St James’s Palace in Westminster, England.

Every constitutional step taken on the forecourt of Parliament House followed the traditions set in London and, therefore, reminded every onlooker of a debate – muted for now, but inevitable in time – about whether Australia might one day break its bonds with Buckingham Palace.

“Now is not a time to talk about our system of government,” Prime Minister Anthony Albanese said on Sunday morning.

“Now is a time for us to pay tribute to the life of Queen Elizabeth, a life well lived.”

Tens of billions of dollars of infrastructure slated for the next decade, much of it in the regions, could be under threat in the next two budgets as Treasurer Jim Chalmers searches for savings ahead of the October 25 budget.

A suite of regional programs promised to then-Nationals leader Barnaby Joyce in return for his party’s support of the Coalition’s net zero carbon emissions by 2050 policy are also being reviewed by the government as it combs through past Morrison pledges. In June, Joyce boasted that he had secured nearly $30 billion. 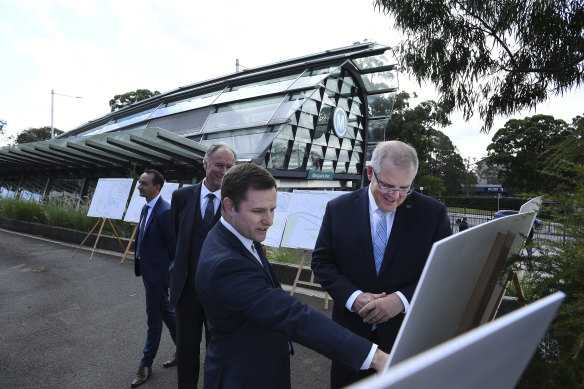 Former prime minister Scott Morrison promised tens of billions of dollars for infrastructure projects that are yet to begin construction.Credit:Kate Geraghty

Few of the funds and projects announced in the March budget were officially signed off before the election campaign – and none had begun construction. The government’s ongoing rorts and waste audit is scrutinising all these funds alongside grants and infrastructure pledges.

More on this issue here.

The oak casket carrying the late Queen has arrived at Palace of Holyroodhouse, Edinburgh, after a more than six-hour journey from Balmoral filled with emotional tributes from locals throughout the Scottish countryside.

Thousands of mourners lined streets in Scottish towns and cities, as the cortege made the 281km trip from the Queen’s favourite Highland retreat to the capital. Her daughter, Princess Anne, dropped a curtsy as her coffin was carried into the palace where her mother had stayed only weeks before. 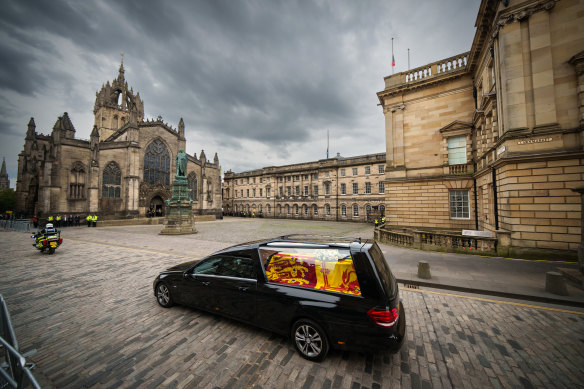 The cortege carrying the coffin of the late Queen Elizabeth II passes St Giles’ Cathedral on its way to Palace of Holyroodhouse in Edinburgh, Scotland.Credit:Getty

The crown of Scotland will be placed on the coffin and for 24 hours from Monday afternoon, Australian time, people will be able to pay their respects – the first time members of the public will file past the coffin – while a vigil is maintained at St Giles’ Cathedral by the Royal Company of Archers.

This morning’s key headlines at a glance

It’s Monday, September 12. I’m Broede Carmody and I’ll be anchoring our live coverage for the first half of the day.

Here’s what you need to know before we get started.