Minister for Resources and Northern Australia, Matt Canavan, was speaking on the Today show a short while ago.

He was asked about the four people who were fined after illegally travelling from Sydney to Queensland on a 34.5-metre superyacht. The group has tested negative to COVID-19, which has authorities relieved given they attended a rugby match in Brisbane.

However, in-line with the border rules, each member of the group was slapped with a $4000 fine.

Here’s what Mr Canavan had to say about the incident:

“I think they should be paid a much bigger fine than hiring that super yacht. I’m not sure the fine would be large enough under the law for these morons. It is not just that they broke the law. They did so willingly and knowingly. This is just absolutely beyond the pale and the total law book should be thrown at them.”

The Victorian and federal governments are locked in a battle of recrimination and blame after Prime Minister Scott Morrison announced a plan to support people unable to work because of the NSW coronavirus lockdown.

After a second death and another 89 new COVID-19 cases recorded in Sydney on Tuesday, Mr Morrison announced that workers in NSW will get an increase in their income support from $500 to $600 a week while business owners will be offered a cash-flow boost of up to $10,000. 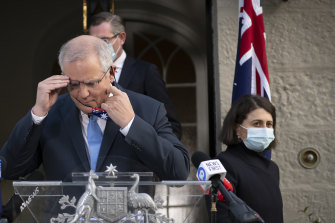 The support will flow to thousands of companies forced to close during the lockdowns across Greater Sydney under a package funded equally by the federal and NSW governments, testing a new model for shutdowns in other states and territories.

But the plan was not received warmly in Victoria where during the lockdown in May and June relations soured after federal government members backgrounded journalists on its view that state governments should take primary responsibility for the cost of lockdowns.

After the first week of Victoria’s lockdown, the Commonwealth funded a disaster payment of up to $500 for those who had lost work, although it had an assets test imposed which has been waived in NSW.

NSW preparing for another four weeks of lockdown

The NSW government has laid the foundations for Sydney to be in lockdown for another four weeks, setting aside $4.1 billion to support businesses across the state as well as all workers who have had their hours cut.

With Premier Gladys Berejiklian poised on Wednesday to extend Sydney’s lockdown, the NSW government has announced its biggest economic support package in history as it tries to lessen the pain of the shutdown. 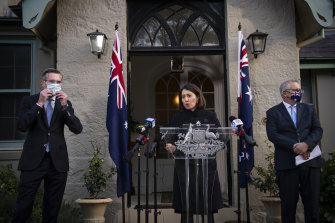 The total support package for NSW is $5.1 billion, which includes $1 billion from the federal government, although it does not include the Commonwealth’s income support disaster payments of up to $600 a week.

It’s set to be a busy day today, with all eyes on Sydney’s case numbers. Meanwhile, residents of an apartment block in Melbourne’s north-west are nervously awaiting test results after a COVID-19 scare. Queenslanders are also bracing to see if their state slams shut its border to NSW.

Here’s everything you need to know.