GPs, pharmacists keen to roll up sleeves for boosters with decision by week’s end

GPs are preparing to alert patients they’re eligible for a coronavirus booster shot as pharmacists call for access to the Pfizer vaccine, with a decision on Pfizer boosters expected before the end of the week.

The Therapeutic Goods Administration’s vaccine advisory committee met yesterday to consider the use of Pfizer’s COVID-19 jab as a booster. The Australian Technical Advisory Group on Immunisation will then consider the benefits of a broad booster program later this week. 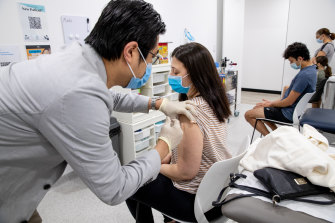 GPs are gearing up to administer booster shots, while pharmacists want the federal government to allow them to use Pfizer – the only vaccine so far to be considered for boosters.Credit:Edwina Pickles

Health Minister Greg Hunt said last week the government was ready to roll out a booster program once it is approved by the medical bodies, and Deputy Chief Medical Officer Professor Michael Kidd said the Commonwealth was preparing to start a rollout on November 8.

Pharmacists are also keen to be involved in the booster rollout, but currently risk being left out unless the federal government allows pharmacists to dispense Pfizer doses, or unless Moderna applies for its vaccine to be used as a booster. Moderna is expected to submit data for consideration soon.

The staggered return to face-to-face learning in Victoria is coinciding with high coronavirus case numbers in the community and more than 200 schools have been forced to temporarily close this month.

New COVID-safe protocols mean schools no longer have to close for 14 days, but can reopen the next day in some cases. 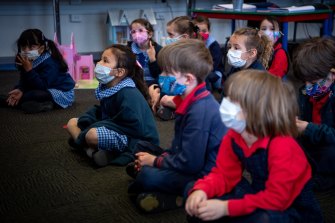 New COVID-19 protocols and high case numbers in Victoria mean that schools need to offer a blend of face-to-face and remote learning in term 4. Credit:Eddie Jim

The new protocols enable more students to be in class, but also require schools to perform a new juggling act: educating both the students who are on campus and those who are in quarantine.

Berwick Lodge Primary principal Henry Grossek said the new protocols were particularly tough on primary school students, who are unvaccinated and so must spend 14 days isolating at home.

The large primary school in Melbourne’s southeast has been closed for the past week after 14 students tested positive last week, but will reopen today.

Former NSW deputy premier John Barilaro has told a corruption inquiry he does not believe a controversial gun club grant would have come before a cabinet committee if then-treasurer Gladys Berejiklian had disclosed her secret relationship with Wagga Wagga MP Daryl Maguire.

Mr Barilaro yesterday said he first learnt of the relationship during a public corruption hearing last year, with the revelation causing him to reflect on the funding decision for the club in 2016. 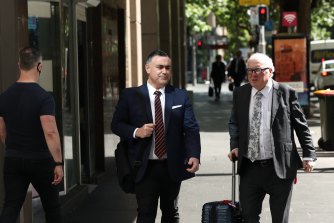 Had the relationship been disclosed, he said measures would have been taken to govern how the proposal was debated by the government’s expenditure review committee.

The Independent Commission Against Corruption is examining whether Ms Berejiklian breached the public trust or encouraged corrupt conduct during her relationship with Mr Maguire.

The inquiry, in its second week, is probing two government grants sought for Mr Maguire’s Wagga Wagga electorate, including $5.5 million for a clay target shooting club.

Ms Berejiklian is yet to give evidence but has vehemently denied any allegations of wrongdoing.

The first-dose pace has picked up in Queensland since the Palaszczuk government’s road map and regional “vax-a-thon” launched last week, but remains at almost the lowest rate since September.

With just days left for so-far unvaccinated residents to start their weeks-long process to be fully protected before the easing of travel restrictions from hotspot states, authorities remain concerned about regional areas but confident the 80 per cent target will be reached statewide. 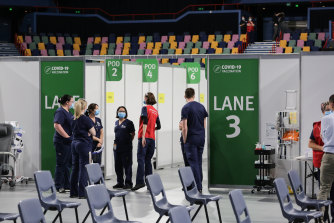 Staff at the Brisbane Entertainment Centre mass vaccination hub at Boondall, in the city’s north.Credit:Matt Dennien

The latest federal vaccine rollout data shows a total of 60.7 per cent of Queensland residents 16 and older were fully vaccinated as of Sunday, with 75.2 per cent having received a first dose.

Western Australia remains the only jurisdiction behind Queensland on double-dose coverage.

More on the situation in Queensland here.

It’s Tuesday, October 26. I’m Broede Carmody and I’ll be anchoring our live coverage for the first half of the day.

Here’s everything you need to know before we get started.