Australia has appointed the former ambassador to China, Jan Adams, as its top envoy in Tokyo in a sign of Japan's increasing strategic importance amid rising geopolitical tensions in the region.

Japan is lobbying to become part of the "Five Eyes" western intelligence sharing network, while Australia will join defence exercises with Japan, India and the US, and Prime Minister Scott Morrison is making plans to visit Tokyo as one of his first international trips since the beginning of coronavirus pandemic. 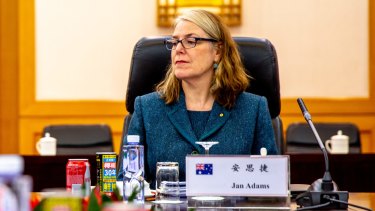 The three intelligence, military and trade agendas are all focussed on managing the rise of the Chinese Communist Party and diversifying economic dependency away from Beijing towards Australia's democratic allies. The Malabar defence exercises in November will see "the quad" diplomatic network act in a naval capacity for the first time since 2007 as a show of deterrence to China's claims on the South China Sea.

Japan has also been pushing in diplomatic circles for greater engagement from Australia in South East Asia, where China's influence is rising, after a priority shift to the Pacific under the Turnbull and Morrison governments.

Foreign Minister Marise Payne said on Thursday the value of Australia's relationship with Japan had increased with COVID-19.

"Australia and Japan share similar visions for an open and prosperous region, based on our common values of democracy and human rights, and shared approaches to international security," she said. 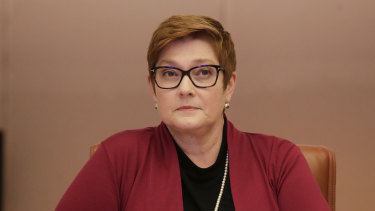 "This includes working together with Japan to shape global outcomes through multilateral cooperation, including to ensure multilateral institutions are transparent and effective."

Japan is Australia's second largest trading partner after China, accounting for $87 billion in two-way trade in 2019.

Ms Adams, a career diplomat, led the negotiations on Australia's free trade deals with China, Japan and South Korea before being posted to Beijing in 2016, where she was ambassador until August 2019.

The period was marked by steadily increasing tensions over foreign interference and culminated in the Turnbull government's decision to ban Chinese telecommunications giant Huawei.

Ms Adams' replacement, Graham Fletcher, has negotiated Australia's relationship with Beijing during its period of sharpest decline as the coronavirus catalysed diplomatic disputes over trade, the South China Sea, treatment of Uighurs in Xinjang and pro-democracy protesters in Hong Kong.

The US has also been bolstering its engagement with Japan, the largest economic power in China's immediate northeast-Asian region.

US secretary of State Mike Pompeo urged the US, Australia, India and Japan to counter China's "exploitation, corruption and coercion" in Tokyo after meeting its foreign ministers as part of "the quad" in October.

China's Foreign Ministry has labelled the group an "exclusive clique" that undermines the interests of third parties.

Foreign Minister Wang Yi in October said the quad strategy was a "big underlying security risk" that will "wind back the clock of history" to maintain the dominance of the United States.

"What it pursues is to trumpet the Cold War mentality and to stir up confrontation among different groups and blocs and to stoke geopolitical competition," he said.

The most important news, analysis and insights delivered to your inbox at the start and end of each day. Sign up to The Sydney Morning Herald’s newsletter here and The Age’s newsletter here.