Australia’s Nicholas Hough missed out on a spot in the 110m hurdles final after hitting every single hurdle in his semi-final on Wednesday.

Hough appeared to struggle out of the blocks and never recovered his rhythm after clipping the first hurdle.

The only hurdle he didn’t knock over was the first one connected with at the beginning of the race.

‘He is going to be so frustrated,’ Channel 7 commentator Tamsyn Manou said.

‘He just couldn’t keep his hip height high because he hit the first hurdle and he kept hitting them.’ 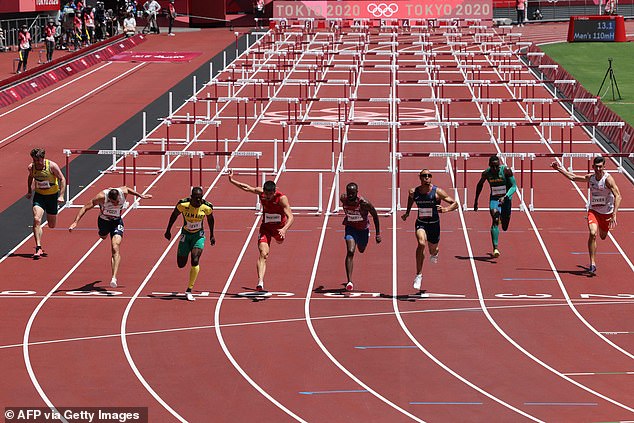 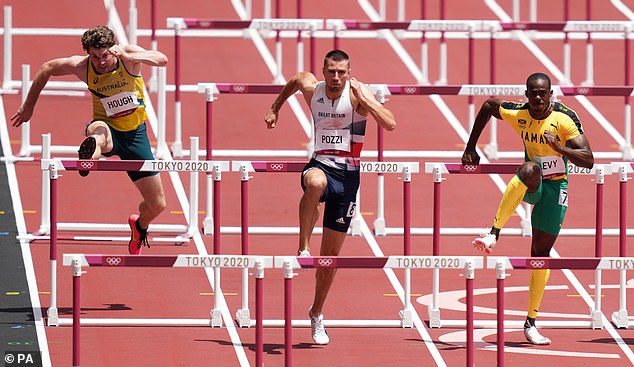 Fans have praised his Aussie spirit, saying he did well not giving up despite the outcome of the race (Hough pictured left)

The Olympic debutant’s unfortunate performance had fans across the world giggling on social media, with one writing: ‘Nick thought it was the 110m bum scraping event.’

‘Nicholas Hough in lane 9 ran the greatest race in Olympic history. Ran through the hurdles. Didn’t come in last. Beast mode,’ added another.

‘How good’s the man mountain hurdler Nicholas Hough? Just barrels through them, no dramas,’ added a third.

Not even the commentators could resist a cheeky dig at Hough after a similar performance in his qualifying heat, saying: ‘The hurdles in lane three have made a request not to come back after that run.’

It soon emerged that there was a simple reason for his failure to get clear over the obstacles.

‘I had a sore calf after the heat yesterday,’ he said in his post-race interview.

‘So it was a struggle to warm up and I didn’t have much power getting going and driving through the hurdles.

‘It’s great to be out here and representing Australia. Amazing to be competing at my first Olympic semi-final and it’s fuelled the fire to go to the final next time.’ 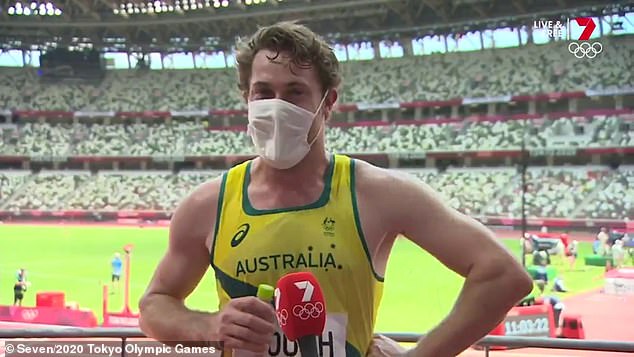 He revealed in his post-race interview (pictured) that he was suffering from a calf injury, causing his disappointing performance

Despite knocking over nine hurdles, he was just 0.3 seconds short of the time that saw him qualify for the semi-finals.

He was eliminated from the competition, finishing seventh in his semi with a time of 13.88 seconds, well shy of his personal best of 13.38.

The semi-final was won by Ronald Levy, who finished with a time of 13.23 seconds.

‘At least he kept his own rhythm to finish the race. Some, would give up and not finish. Well done #NickHough’ wrote one admirer.

Hough says that while he was disappointed in his performance, he is ready to start building up towards the Paris Olympics in three years time.

Holloway didn’t look quite as his smooth as in the opening round, but he still managed the fastest semi-final time of 13.13 seconds.

Allen, who has spent time training and competing in Australia in previous years, won his semi in 13.18.

The final for this event is set to kick off Thursday August 5 in Olympic Stadium at 11:55am. 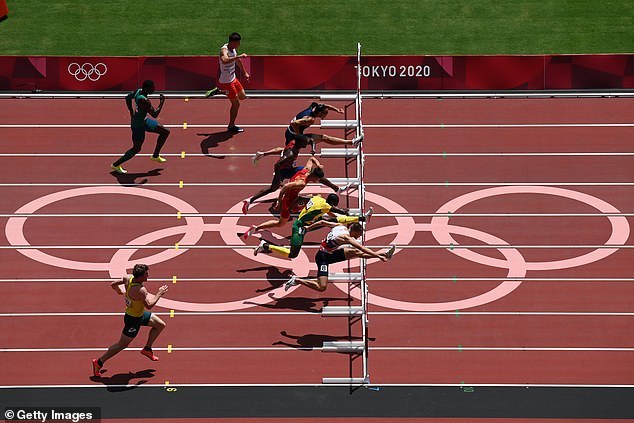 US duo Grant Holloway and Devon Allen posted the fastest time in the 110m hurdle events. The final is set for August 5 at 11:55am