The reel thing! Astonishing moment an ice fisherman’s rod is dragged away by a huge pike in Russia

This is the astonishing moment an ice fisherman’s rod is dragged underneath the water by a huge pike in Russia.

The clip, filmed in Zhigansk, Sakha Republic, captures the man as he sits with his fishing line lowered into an ice hole inside a tent.

He studies the monitor of a small underwater camera attached to his rod in search of a catch as he moves the device up and down carefully. 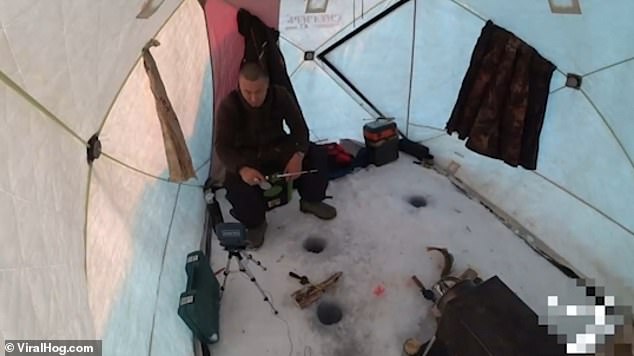 The clip, filmed in Zhigansk, Russia, captures and ice fisherman as he sits with his line lowered into a small hole in the ice

But when a fish finally does bite, he quickly yanks the rod higher, grabbing onto the line when a huge pike drags it further into the hole.

The bemused ice fisher then holds the metal rod on his lap as he reels in the determined fish with his bare hands.

But moments later, the tiny device is suddenly pulled into the water with a splash as the pike swims away.

The fisherman then jumps to his feet when the rod disappears, reaching his hands into the water only to discover his equipment is far beneath the ice. 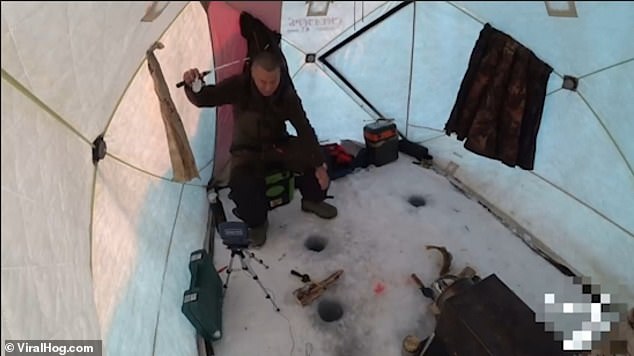 He soon gets a bite, and pulls his rod away from the water in an attempt to reel in the huge pike 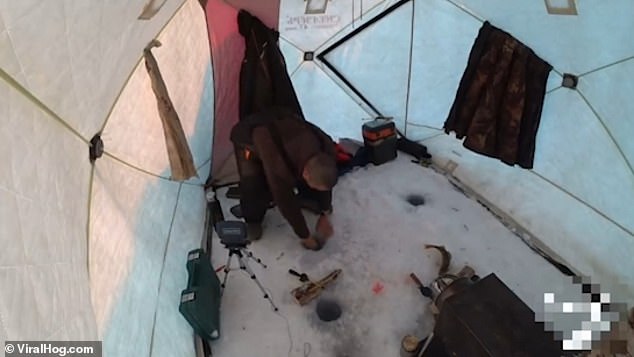 He then jokes with the camera as he watches the small monitor to try and discover what happened to his rod.

‘I was fishing in my tent and a huge pike dragged my rod into the hole,’ he said.

The clip, filmed on December 5, has since been viewed more than 59,000 times.

One viewer said: ‘Legend has it that this fish is still dragging this pole around to this day and many more to come forever and ever and ever!!!!’

Another commented: ‘Mission failed we’ll get ’em next time.’