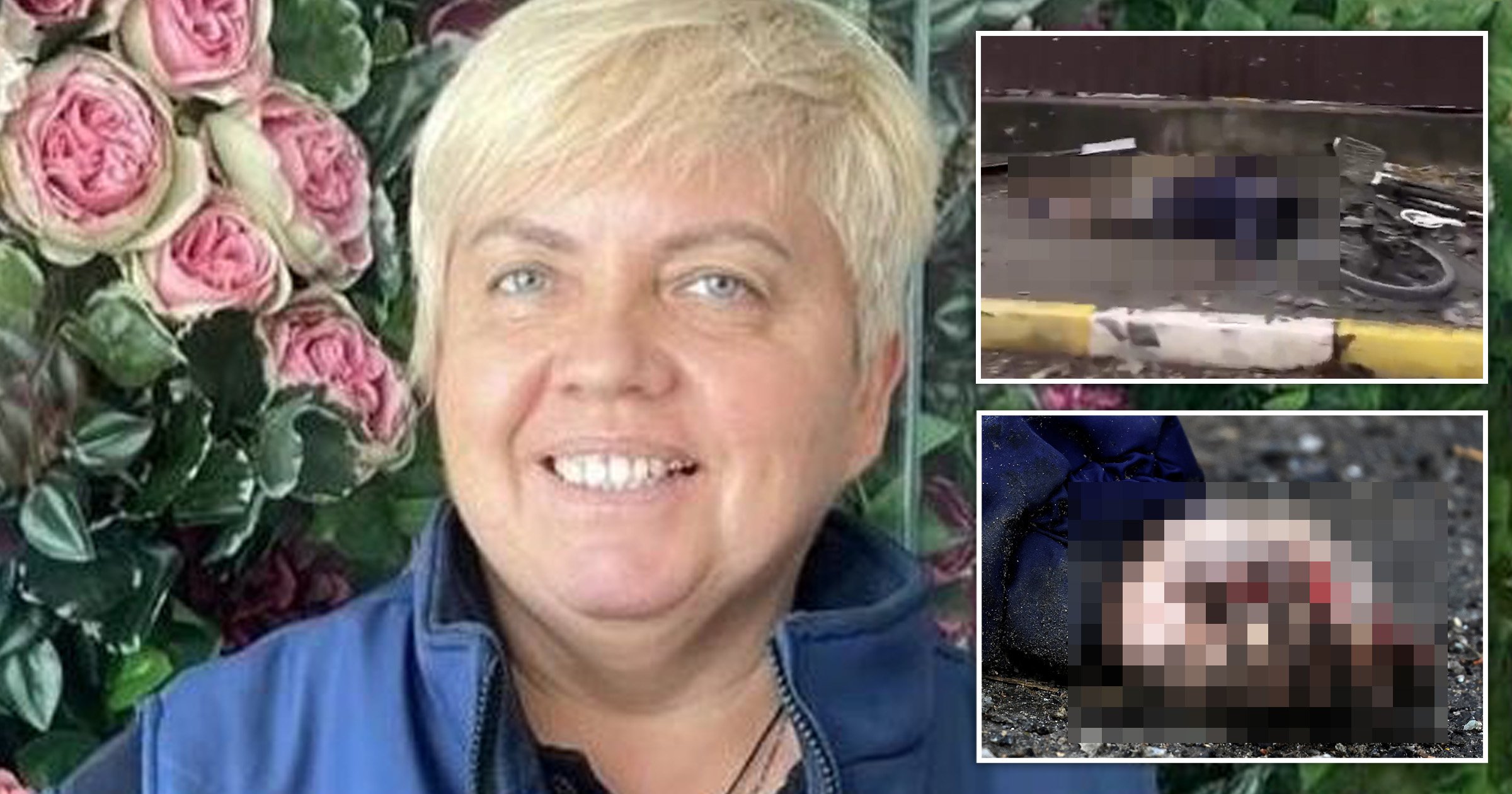 A woman who dreamed of becoming a makeup blogger before she was killed by Russian troops in Bucha, Ukraine has been identified by her distinctive manicure.

The image of Iryna Filkina’s perfectly manicured hand lying lifeless on the ground has been one of the most harrowing images to come out of Bucha in the wake of Russia’s retreat.

The 52-year-old mum was identified by her makeup artist who recognised Iryna’s bold red and white nail varnish when the photo was shared online.

In another heartbreaking twist, a drone appears to have captured the moment Iryna, a heating station operator, was shot by a tank as she cycled home from work on March 5.

The footage shows a previously unidentified cyclist wearing a blue coat pushing their bike up the street, unaware that several Russian tanks lay in wait around the corner.

As the cyclist, now understood to be Iryna, turns the corner the military vehicles open fire with devastating consequences.

A second video, taken a month later once Ukrainian forces had recaptured the town, showed a cyclist, also in a blue coat, in the same location lying dead on the pavement.

Anastasiia Subacheva, a makeup artist from the nearby city of Gostomel told The New York Times she instantly recognised Iryna’s hand when she saw the photograph.

She said the carefully painted nails were the ones she had seen many times during Iryna’s makeup lessons.

Ms Subacheva told the paper when she saw the image her heart broke.

‘When I saw it, I felt physically like my heart started to break,’ she said from the city of Kropyvnytskyi.

She said her dream was to become a popular artist and to increase her following on Instagram.

Ms Subacheva said Iryna talked about her excitement about going to see the Ukrainain singer Olya Polyakova in concert and talked about what she would wear for the show.

Iryna’s daughter, Olha Shchyruk, who fled Bucha when the war started, said she learned her mum had been shot on March 6, but held onto hopes the reports were false.

In a message posted on Telegram Ms Shchyruk said: ‘I understand that it wasn’t possible, because she hadn’t been in touch for a month.’

‘But a child will always be waiting for her mother.’

Ms Shchyruk is understood to have received a video showing her mum lying dead on the ground, as well as the picture of her hand last week.

‘Even if there was no manicure, I would have recognized it was my mother,’ she said.

Speaking to CNN, Ms Shchyruk said she begged her mum not to cycle home on March 5 and instead flee the area as she had done.

Iryna is understood to have tried to get a seat in a car leaving Bucha but there wasn’t enough space so she headed home.

She is understood to have been just 15 minutes from her house when she was shot.

Bucha, to the north west of the capital, has been the site of horrific attacks, with reports of civilians being massacred and buried in mass graves with evidence some were, tortured, burned and raped.

Russia has been accused of committing war crimes and the carnage has led to a fresh set of sanctions being imposed on Moscow.

The county has also been suspended from the UN Human Rights Council as a result of the accusations.