Brazil approaches 4,000 Covid deaths a DAY and is responsible for a quarter of the world’s daily virus fatalities as fears grow over ‘more infectious’ P1 variant

Brazil is responsible for more than a quarter of the world’s daily Covid deaths with thousands of patients lost every day, amid stark warnings worse is to come.

Brazil has recorded more than 300,000 deaths from coronavirus so far with the number expected to continue to rise as a more contagious variant continues unabated.

At least 12.3 million people are now known to have been infected with the coronavirus in Brazil. 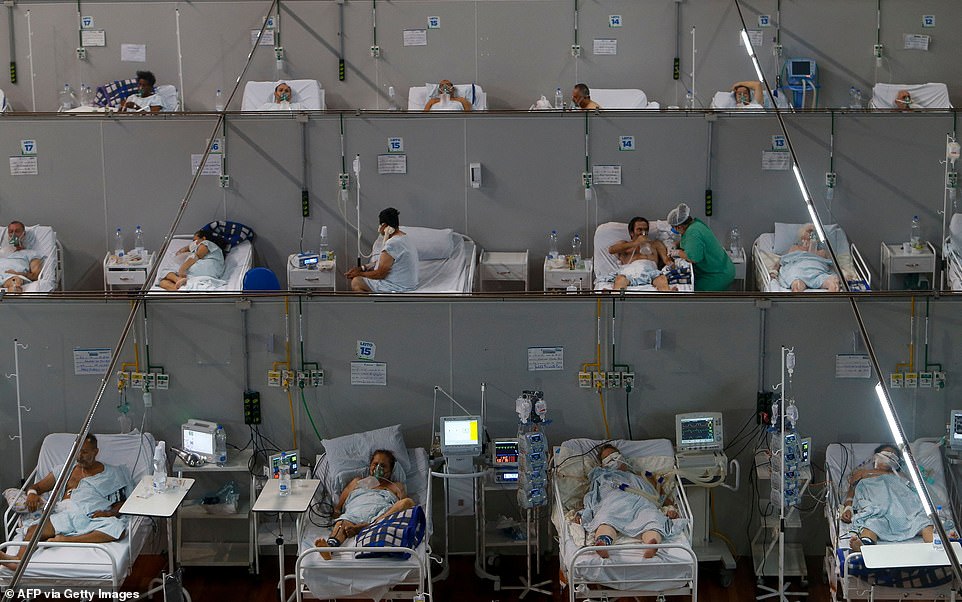 Patients infected with Covid 19 in a field hospital set up at a gym in Santo Andre, Sao Paulo, as it emerges nearly 4,000 people are dying every day

The virus’s spread has been turbocharged by the more contagious P1 variant which has already been identified in the U.S. with a case this week in New York.

Restrictions on activities implemented last year in an attempt to stave off disaster were dismissed by President Jair Bolsonaro, who sought to stave off economic doom.

Miguel Nicolelis, professor of Neurobiology at Duke University who advised several Brazilian governors and mayors on pandemic control, said: ‘We have surpassed levels never imagined for a country with a public health care system, a history of efficient immunization campaigns and health workers who are second to none in the world.

‘The next stage is the health system collapse.’ 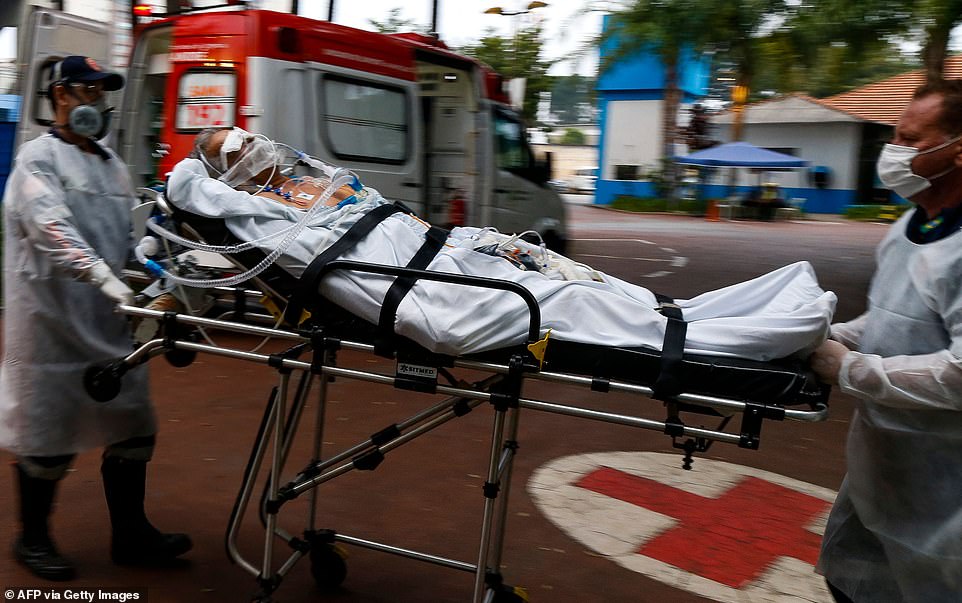 A patient arrives at a temporary hospital set up in Sao Paulo, Brazil, by helicopter amid warnings its healthcare system is close to collapse 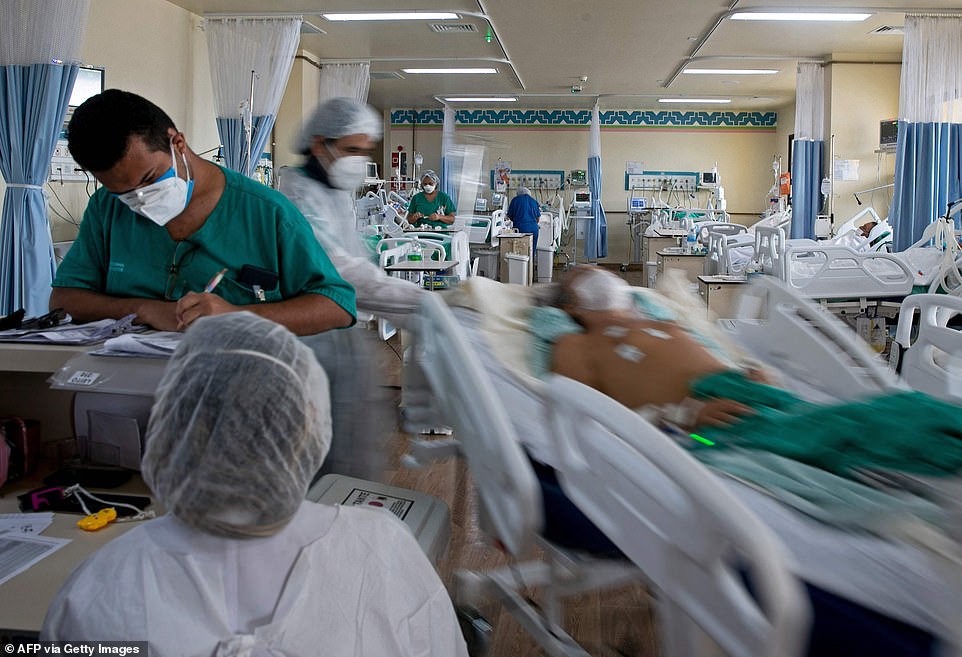 Intensive care units across Brazil are either full or close to capacity as the death toll reaches more than 300,000 victims 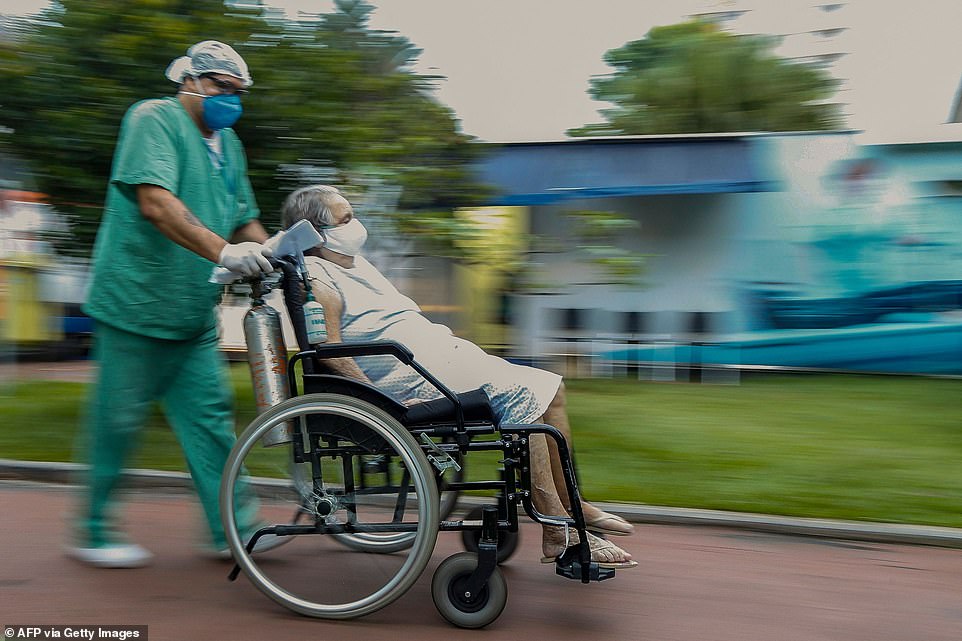 Just two per cent of the population in Brazil have been vaccinated against the virus as the death toll nears 4,000 every day

The system is already buckling, with almost all states´ intensive care units near or at capacity.

To make matters worse the city’s oxygen supply isn’t guaranteed, and stocks of sedatives required for intubation in intensive care units will soon run out.

He said: ‘Four thousand deaths a day seems to be right around the corner. 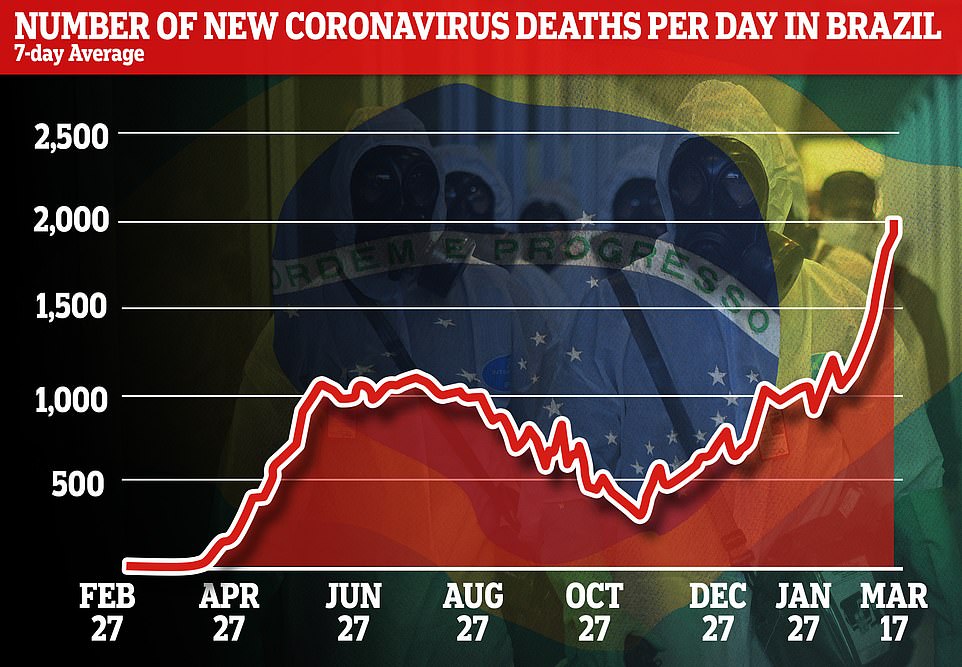 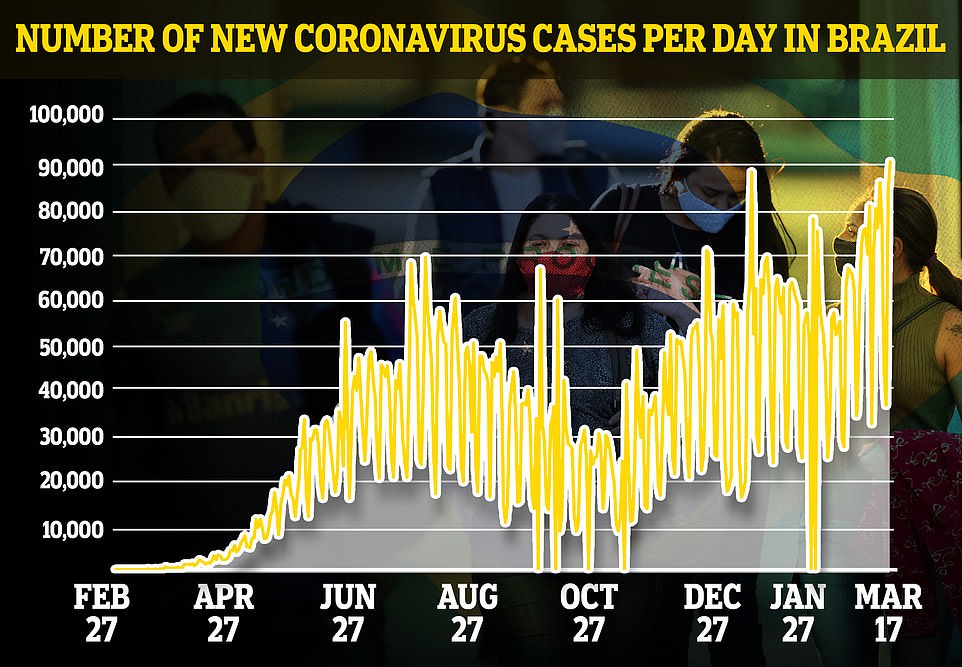 Brazil’s state-run science and technology institute, Fiocruz, on Tuesday called for a 14-day lockdown to reduce transmission by 40%.

Natalia Pasternak, a microbiologist who presides over the Question of Science Institute, added: ‘We need coordinated action, and that´s probably not going to happen because the federal government has no real interest in pursuing preventative actions

‘(Mayors and governors) are trying to implement preventative measures, but separately and in their own ways. This isn’t the best approach, but it´s better than nothing.’ 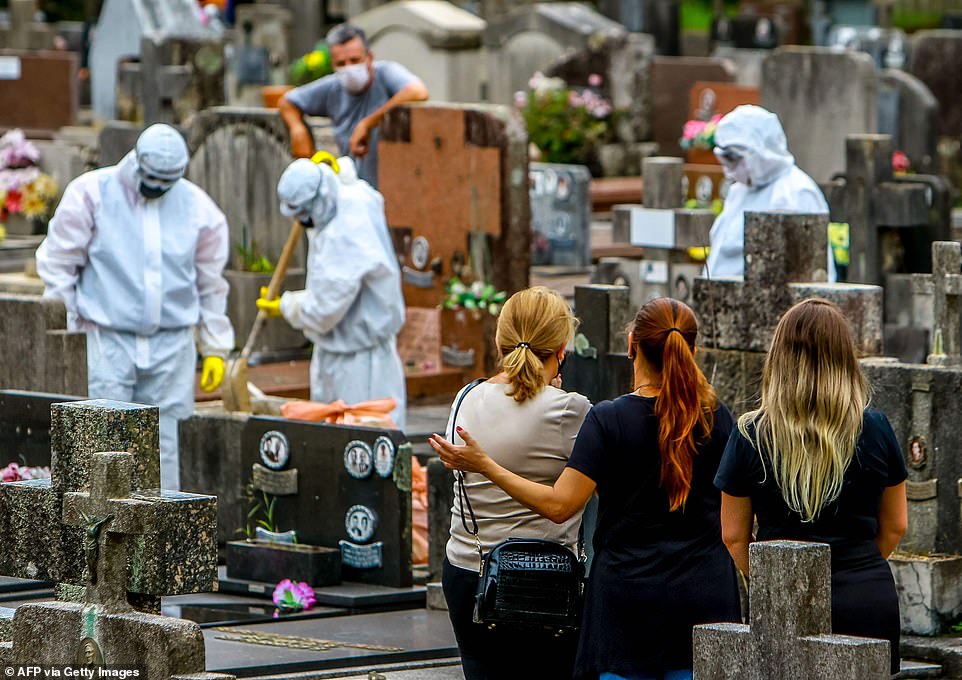 Relatives of a victim of Covid 19 in Brazil watch on as workers clean graves following a burial in Porto Alegre, Brazil, this week 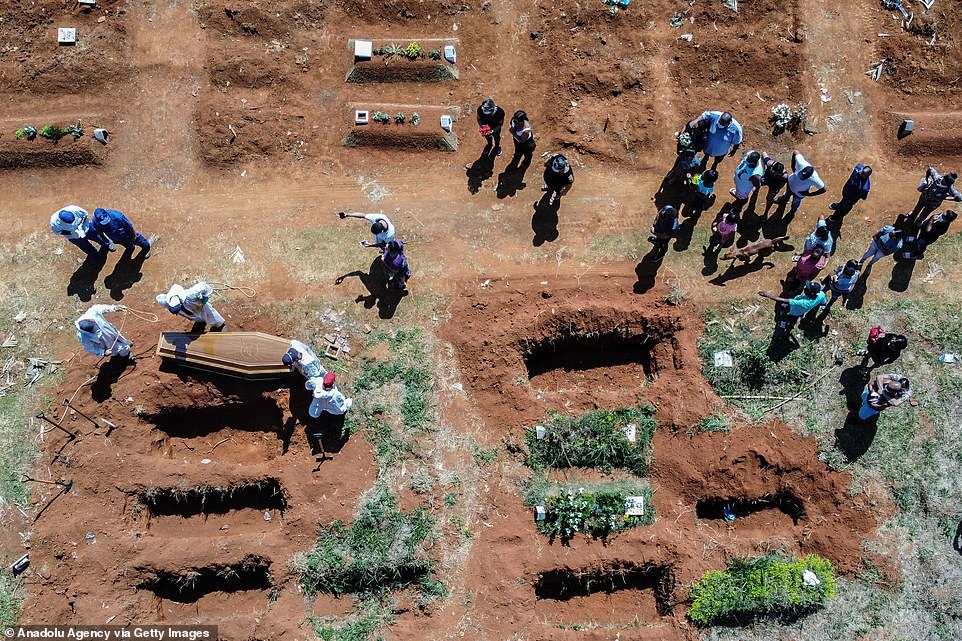 Officials from the Vila Formosa cemetery prepare graves for those lost to Covid 19 as daily death toll numbers reach 300,000 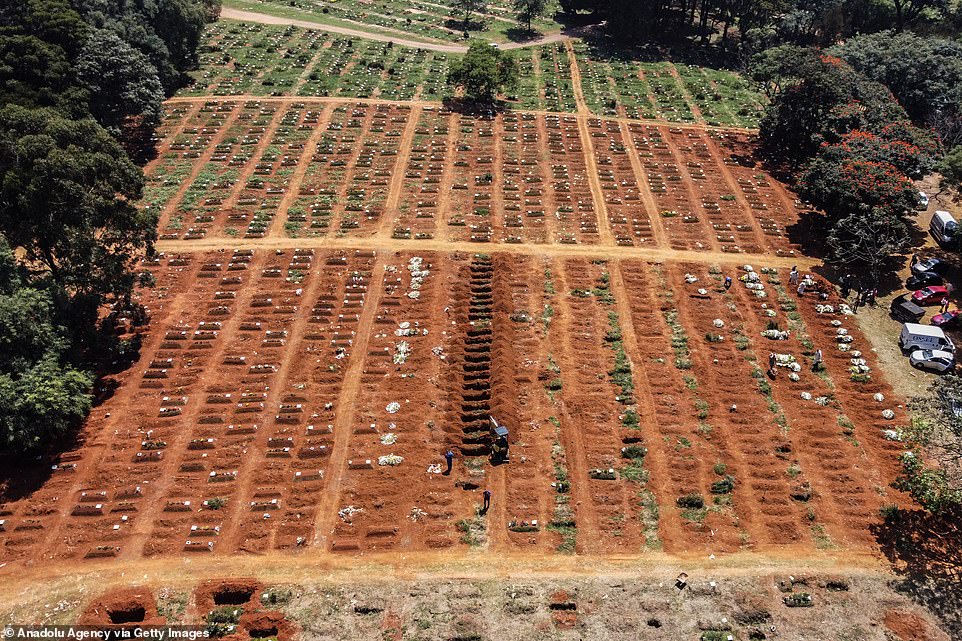 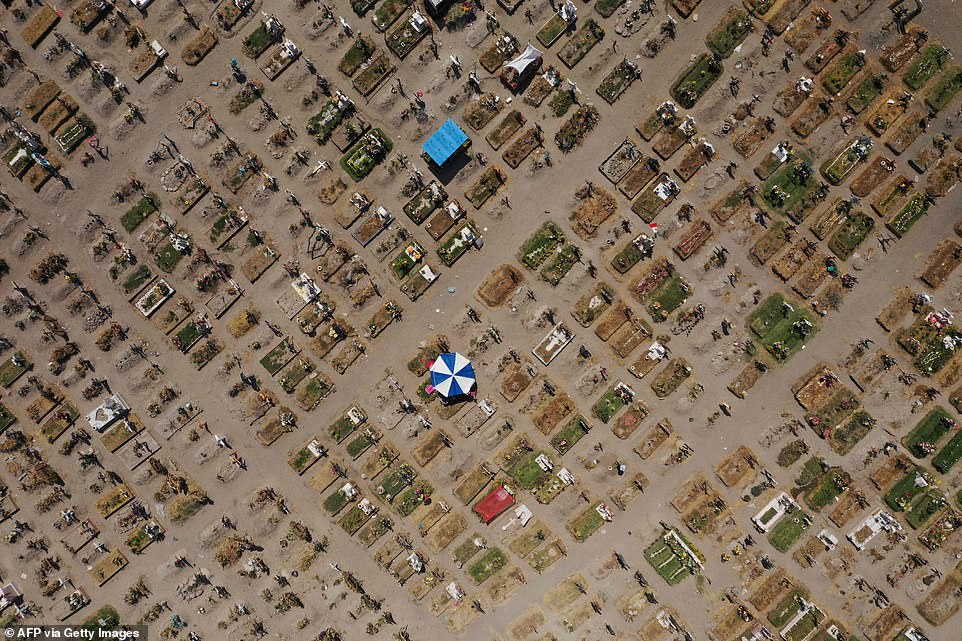 Mass grave sites, such as this one in Mexico, have sprouted in Latin America as countries struggle under the huge death tolls

Their state authorities brought forward holidays to create a 10-day period of repose, which started Friday.

Rio’s Mayor Eduardo Paes said: ‘We need to open our eyes and understand this is no joke. ‘People are dying and, if everything continues as is, nothing is done, God only knows what could happen. No one knows this disease’s limit. No one knows how many variants could emerge.’

The World Health Organization´s director, Tedros Adhanom Ghebreyesus, on Monday called for everyone in Brazil to muster a serious response ‘whether it´s the government or the people.’

He said: ‘It’s a concerted effort of all actors that will really reverse this upward trend.

‘It is actually very fast and accelerating really, really fast. 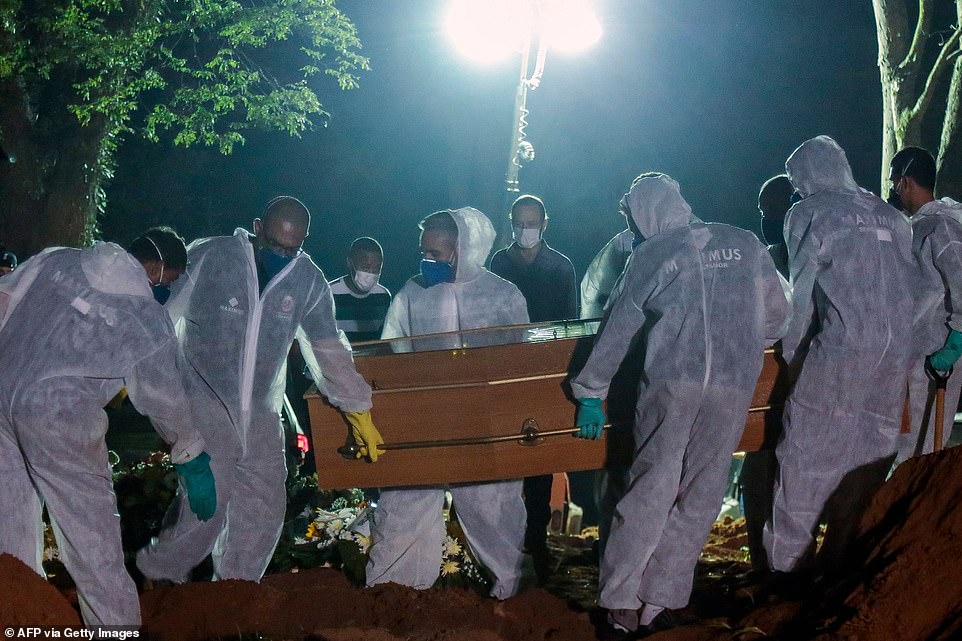 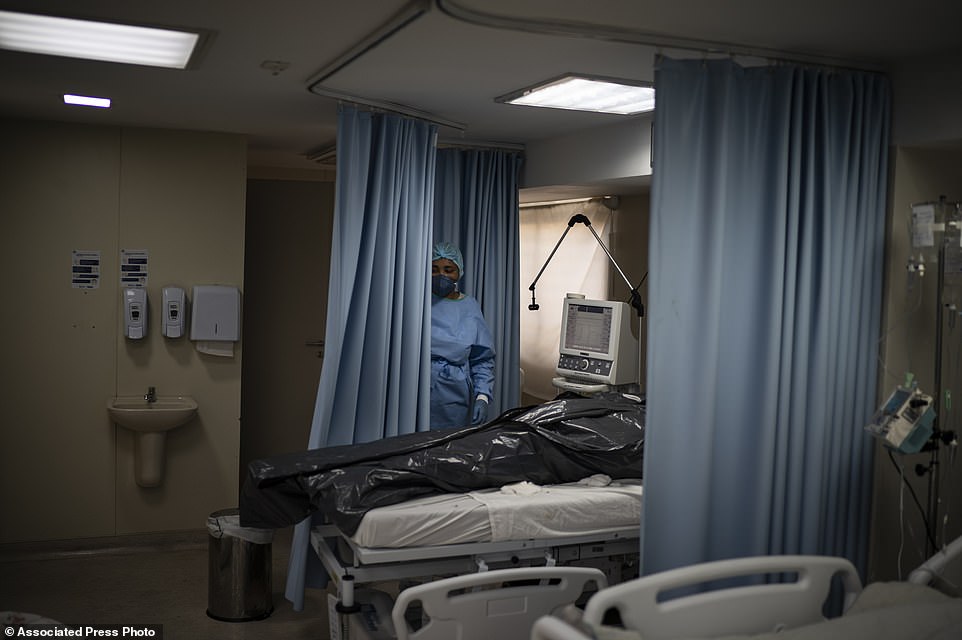 The body of a COVID-19 victim lies in a body bag at the ICU of the Sao Jose municipal hospital in Duque de Caxias, Brazil, Wednesday, March 24, 2021. (AP Photo/Felipe Dana)

Brazil has so far vaccinated less than 2 per cent of its people as delivery delays jeopardized its rollout.

He told Germany’s Der Spiegel: ‘On Tuesday, 3158 people died of Covid in Brazil. It’s the biggest genocide in our history.’

Elsewhere in South America, Argentina has opted to suspend flights from Brazil, Chile and Mexico from Saturday to prevent different strains of the coronavirus from entering the country as it braces for a second wave of infections. 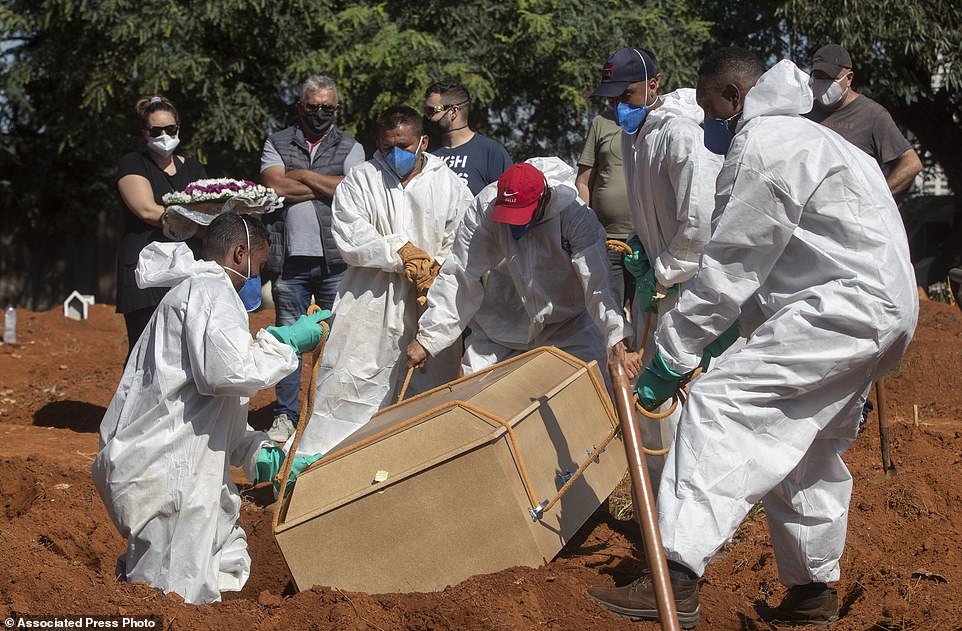 Cemetery workers in full protective gear lower a coffin that contain the remains of a person who died from complications related to COVID-19 at the Vila Formosa cemetery in Sao Paulo, Brazil, Wednesday, March 24, 2021. (AP Photo/Andre Penner)

The government said in a statement on Thursday that the measures, which include tests and mandatory isolation for citizens who return from other regions, will take effect on Saturday.

‘Until further notice, regular flights will be suspended from … Chile, Brazil, Mexico,’ the statement read. A similar policy is already in place for flights from Britain.

Argentina has registered 2,278,115 cases of COVID-19 and 55,092 deaths, and the government is concerned about the chaotic situation in neighbouring Brazil.

In Chile, health officials on Thursday extended a lockdown across the capital Santiago to tame a second wave of infections even as the South American nation continues to plough ahead with the world’s fastest per capita vaccination campaign.

Cases in Chile have been ticking up for weeks following the end of the southern hemisphere summer holiday, but topped a record on Saturday, bringing hospitals to the verge of collapse.