Singapore: If Fahmi Reza unleashed his latest Spotify playlist at a party in Australia, the worst reaction he might expect is a ban from the sound system.

In Malaysia, however, the collection of 100 or so tunes has led to the graphic artist being arrested, thrown behind bars and facing a potential three-year prison sentence.

The 44-year-old’s alleged crime is not bad taste in music – legendary songwriters such as John Lennon and Lou Reed feature in the playlist, albeit a shocker or two like Paris Hilton as well.

Instead, the well-known satirist is being investigated under the country’s sedition law, as well as its communications and multimedia legislation, for allegedly insulting Malaysia’s Queen Tunku Azizah Aminah Maimunah Iskandariah.

The playlist, which Fahmi posted on Spotify and then Apple Music, comprises songs almost all with the word “jealous” or “jealousy” in the title, a reference to the queen’s riposte on social media to speculation about members of the royal family and their staff having jumped the queue for COVID-19 vaccines. 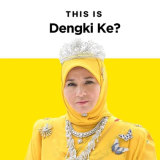 Activist Fahmi Reza has been arrested by police for allegedly insulting the Malaysian queen by posting a satirical playlist “This is Dengki Ke” (jealousy) on Spotify.Credit:AP

“Are you jealous?” she was reported to have replied to the criticism.

On Friday night Fahmi, who closed out the playlist with the Sex Pistols’ God Save the Queen, was arrested as police barged into his home in Kuala Lumpur, slapped handcuffs on him and detained him at a police station. He was released on Saturday night after police failed at a remand hearing that morning to convince a judge to extend his time in custody. But he remains under investigation, with a senior officer promising “tough action … against anyone who intentionally threatens public security”.

“In which country is a graphic artist, censored, caught and locked up for his art?” said Fahmi, 44.

“Isn’t it important for the sake of artistic expression that parody and satire as a form of protest continues to be practised and defended?“

Fahmi’s lawyer Yohendra Nadarajan told The Sydney Morning Herald and The Age there was no merit to the police probe, which was triggered by a complaint made by pro-establishment government MP Ahmad Fadhli bin Shaari. 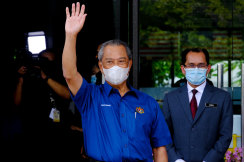 Prime Minister Muhyiddin Yassin has not had to face parliament since January due to Malaysia’s state of emergency.Credit:Bloomberg

“The queen had tweeted this phrase ‘are you jealous?’ when somebody asked her on Twitter if she and her cooks had received vaccines,” he said.

“When you touch the monarchy it’s always a sensitive subject. But this is just taking the mickey out of the situation.

“There has been no complaint from the palace. The Queen is not aggrieved by this.”

The latest arrest of Fahmi, who was jailed in 2018 for depicting then Malaysian prime minister Najib Razak as a clown before his sentence was lifted, has raised more concerns about repression of free speech under the government of current leader Muhyiddin Yassin.

The country has been at a political impasse, with parliament suspended since a state of emergency was declared in January to deal with the pandemic. It can only be lifted by the king, Sultan Abdullah Ahmad Shah, but with key allies in Muhyiddin’s Perikatan Nasional coalition walking away from him, the Prime Minister has been accused of using the COVID-19 crisis to hold onto power.

Former prime minister Mahathir Mohamad delivered a petition to the King last week urging him to end the state of emergency, which runs until August 1, and describing the government as “a dictatorship”.

The suspension of parliament has done nothing to help Malaysia wrestle away the virus. The Muslim-majority nation has registered at least 2000 new cases a day for much of the past fortnight and like most countries in south-east Asia has had a painfully slow vaccine rollout, with less than 3 per cent of its population of 32 million people having received at least one dose.

The government last month brought in new laws against “fake news”, which includes jail terms. Like in Thailand where dozens have been charged under lese-majeste royal defamation legislation for mocking the monarchy, it has used emergency rule to revive Malaysia’s archaic sedition law.

“But that was before the Pakatan Harapan government [led by Mahathir] fell. So now the new government has been using this old outdated law, charging people under the sedition act.”

“The intolerance of PM Muhyiddin Yassin and his government is really off the charts, and this kind of violation of civil and political rights betrays an anti-democratic tendency that values power and control over respect for the people and democracy,” Robertson said.