Violent thugs attack each other with metal poles, baseball bats and blades as mass brawl breaks out on a busy London street in daylight

Shocking footage shows a mass brawl erupting in south London with as many as 20 men fighting with metal poles, baseball bats and blades in broad daylight.

The brawl then descends into absolute chaos as more participants start fighting one another and throwing objects across the street. 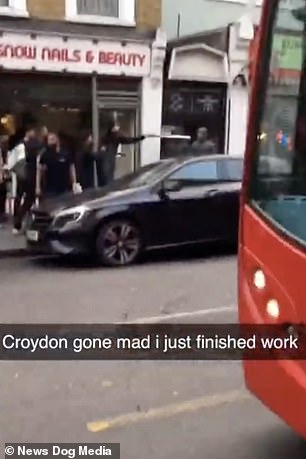 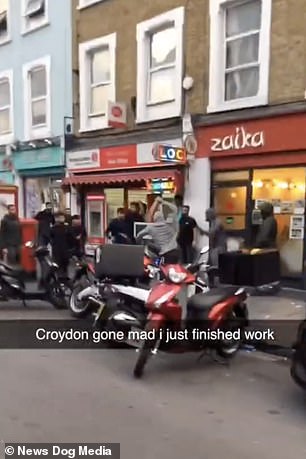 The videos show a number of men fighting with weapons on London Road, Croydon, as stunned bystanders watch in horror on Tuesday September 3

Police recovered one knife from the scene after they were called to reports of 20 men fighting with weapons shortly after 7pm on Tuesday September 3.

One video of the incident shows two men swinging huge metal baseball bats at one another as terrified shoppers walk by.

Another, filmed by a commuter walking past the incident, shows a large group of men gathered around as the brawl escalates, with chaos erupting around the bat fight.

A spokesperson for the Metropolitan Police said they were continuing to investigate the incident.

They told MailOnline: ‘Police were called to London Road, Croydon, shortly after 19.02hrs on Tuesday, 3 September to reports of 20 men fighting with weapons.

‘Officers attended. The group had left the scene. One knife was recovered.

‘There were no reported injuries. Enquiries continue.’

It is unclear why the clash erupted between the groups.