Are these Britain’s most ‘Christmassy’ streets? Neighbours pull together to transform their homes into winter wonderlands with tourists travelling from as far as CHINA to see them

The most festive streets in Britain are drawing crowds from as far away as China as tens of thousands of twinkling lights cover the country.

Among the sparkling seasonal streets is Trinity Close in Burnham-On-Sea, Somerset which has a display of more than 100,000 twinkling Christmas lights.

The street, dubbed ‘Britain’s most festive street’ has been organising the dazzling display for ten years, raising nearly £100,000 for various charities.

Residents taking part in the Trinity Close Christmas lights display which runs for five weeks. switched on their illuminations on Saturday night.

The display is lit each night from 4.30pm-10pm until early January.

The display, running since 1976 attracts up to 10,000 visitors who flock to the village with their children to view the displays in the run up to Christmas.

When it became a popular attraction residents in the street realised all the attention could be put to good use so they began raising money for the local hospice. 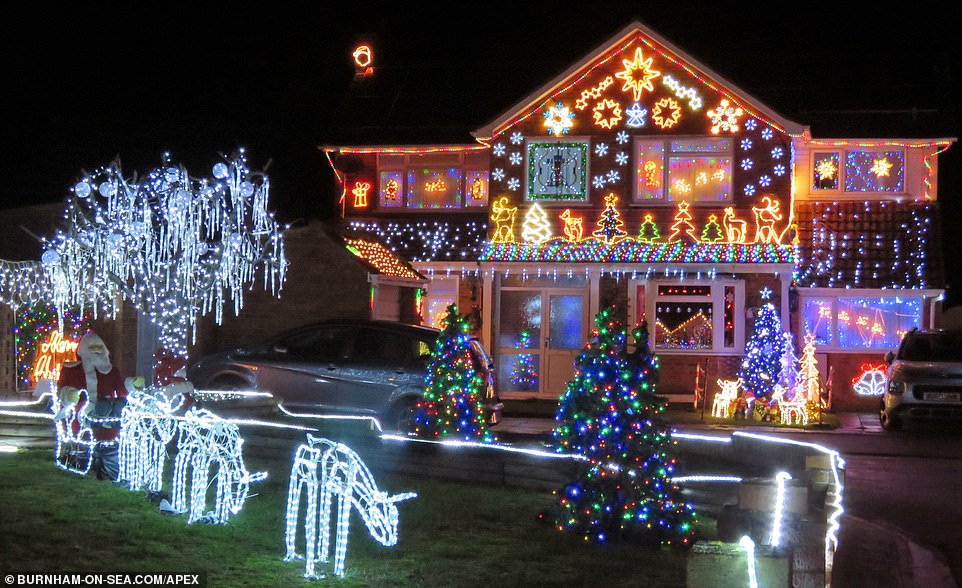 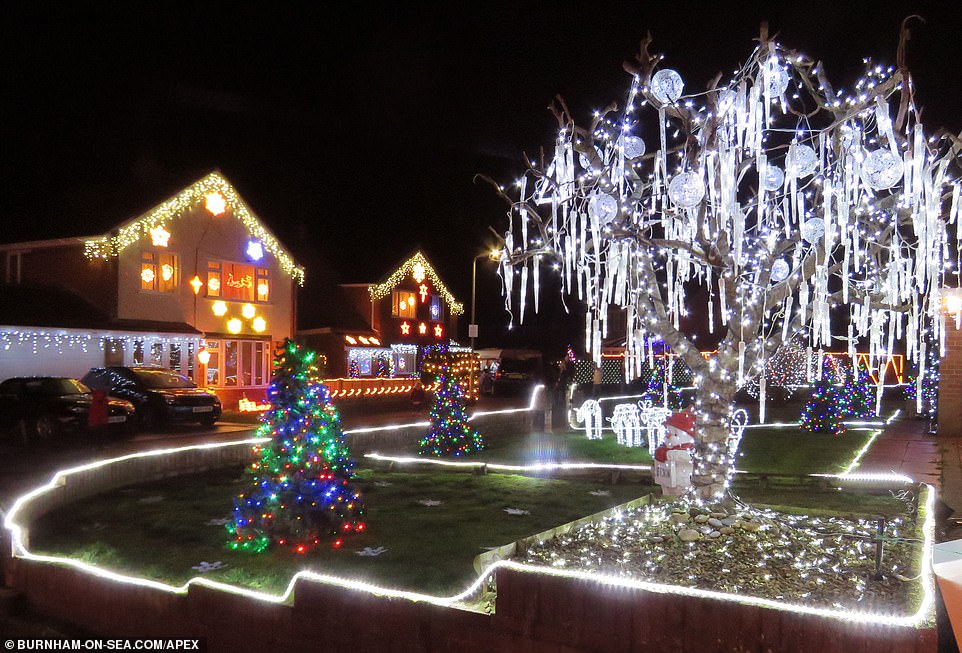 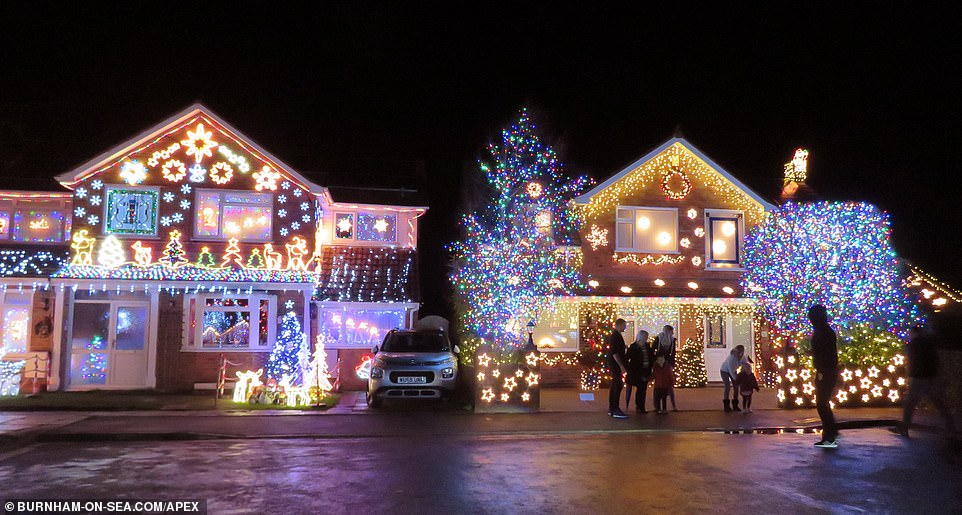 Neighbours along Trinity Close try to create a winter wonderland every single year. The lights will be up for five weeks 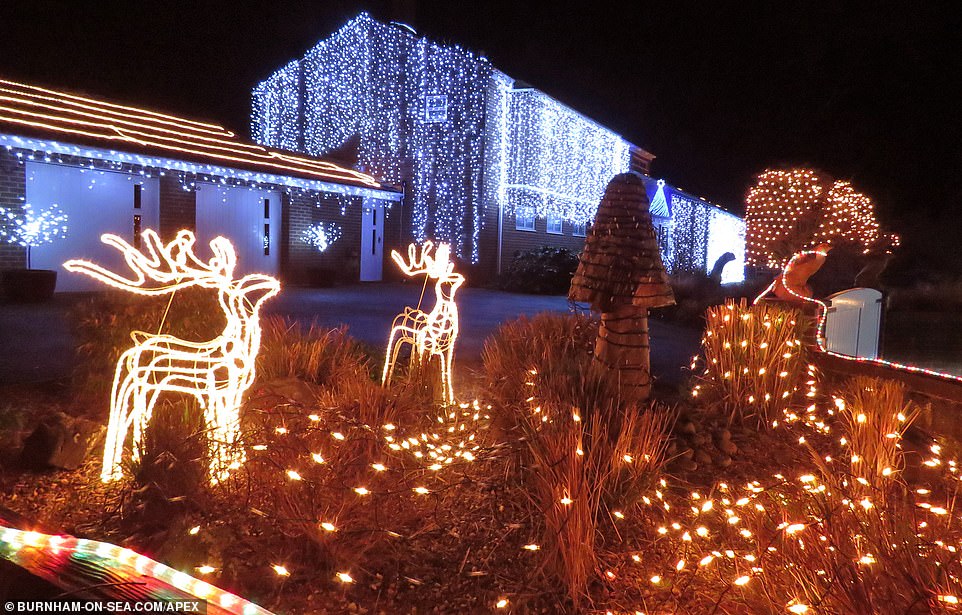 Reindeer stand in the garden of one of the homes in Burnham-on-sea. There are more than 100,000 lights now on display

In the first year the displays raised more than £1,500 and that figure has increased every year.

Organisers estimate that there are more than 200,000 twinkling bulbs on display throughout the village.

It started with a single string of lights to compliment the community Christmas tree and grew from there.

Mr Munday said: ‘From a single string of lights we now have all sorts of attractions including Santas, robins, reindeer and candles; we even have a train that people can sit in.

‘The bad weather in recent weeks means I have had to put up my lights up at the last minute.

‘We look forward to putting on our display every year, we wouldn’t miss it. Also the children love it and if we can raise money for the hospice in return then it is a good thing for the community.’

Tracey Kennett, 57, and his wife Roz, 51, have the biggest display in the village and it grows every year.

Mr Kennett, manager of a tyre firm, says he has spent more than £10,000 on the display.

He said: ‘It’s worth it just to see the children’s faces when they come and see it. It is priceless. Also it helps raise extremely important funds for St Michael’s Hospice and that is growing each year.’

He and his son, John, 32, spend a month putting up the display, starting on November 1 and ending just in time for the big switch on on December 1.

‘This year is our biggest ever display.’ he said. ‘There are more lights than ever. I’ve stopped looking at my electric bill after Christmas because it’s too scary but it is all worth it.’

Roz Kennett said: ‘There’s a little bit of healthy competition between residents to make sure their displays look good. It’s become part of village life, it’s a real community event with us all coming together for a good cause.’

Laura Sully, a community fundraiser at the hospice, said; ‘Westfield village always put on a magical display, which is well worth seeing in the run up to Christmas, so make sure you get all the family together to go and see this spectacular sight, and get into the Christmas spirit.’

Every year tourists from far and wide make an annual pilgrimage to see the amazing Christmas display.

A special 52ft Christmas tree was lit in Inkberrow, Worcestershire – 40 years after it was planted as a 6ft sapling.

The fir now illuminates the entire street where Avril Rowlands and her husband Christopher live.

The pair planted the fir In their front garden after enjoying their first Christmas at their new home in 1978.

The tree now towers above their four-bedroom detached property and the couple hire a cherry picker to decorate it with more than 1,000 lights.

On Sunday the couple celebrated the monster fir’s 40th anniversary.

Retired TV writer Avril, 73, said: ‘The switch-on event has become an absolute institution for the village and we have hundreds of people see the tree.

‘We’ve even had tourists coming from as far as China to have their pictures taken by the tree.

‘It is amazing to think that the tree started as a 6ft tall sapling which we bought for just £6.

‘I remember after that first Christmas thinking to myself that I didn’t want to just throw the tree out so I planted it in the front garden.

‘It took straight away and every year it’s just grown taller and taller.

‘It now takes 1,100 to light the tree, I don’t look at the electricity bill until after Christmas.’

The couple moved to the quiet village in the summer of 1978 after selling their home in London.

The couple’s annual switch-on of their lights has now become a tradition and they use the event to raise thousands of pounds for charity.

Retired BBC editor Christopher, 74, said: ‘A lot of people in the village say that it’s the start of their Christmas.

‘We usually raise about £1,000 a year for charity, a different one each year – this year all the money is going to the Midlands Air Ambulance.

‘We’ve delighted the tree has spread so much happiness and raised so much money. We expect it’ll be for many years to come.’ 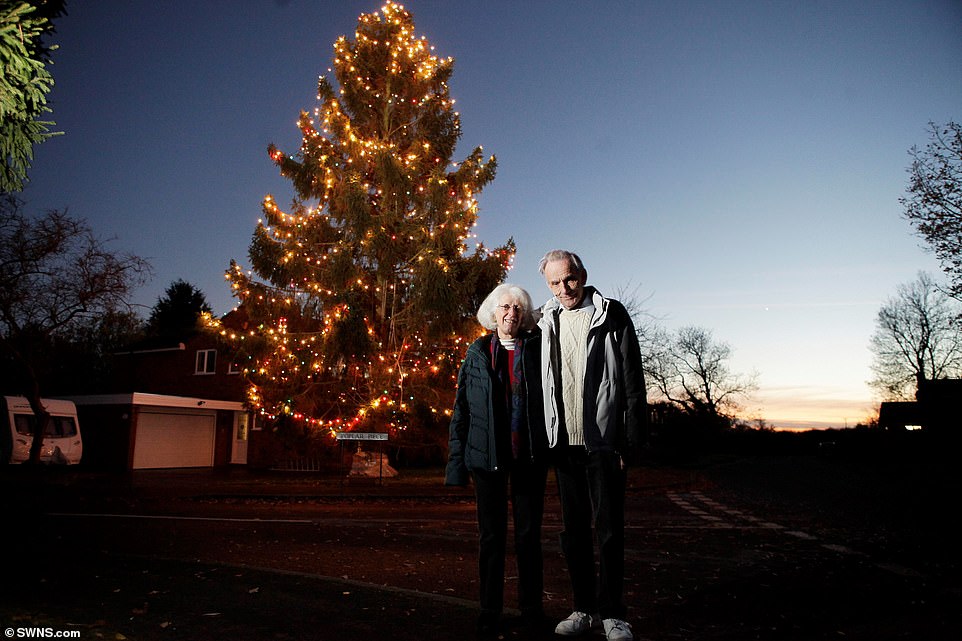 Avril Rowlands, 67 and husband Christopher Rowlands, 68, from Inkberrow in Worcestershire – with the tree they planted forty years ago 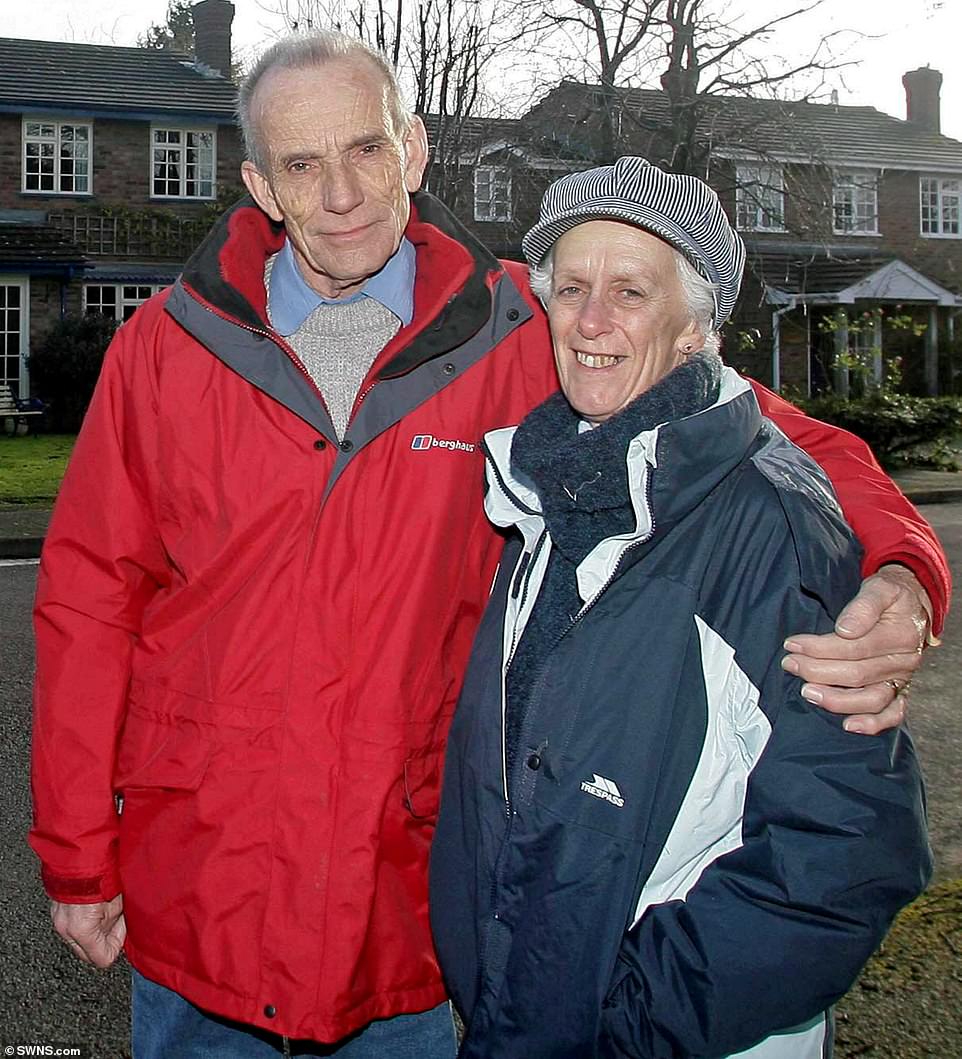 Avril Rowlands, 66, and husband Christopher, 67, bought the tiny pine tree from a garden centre for £6 in 1979 and planted it outside their new home in time for Christmas 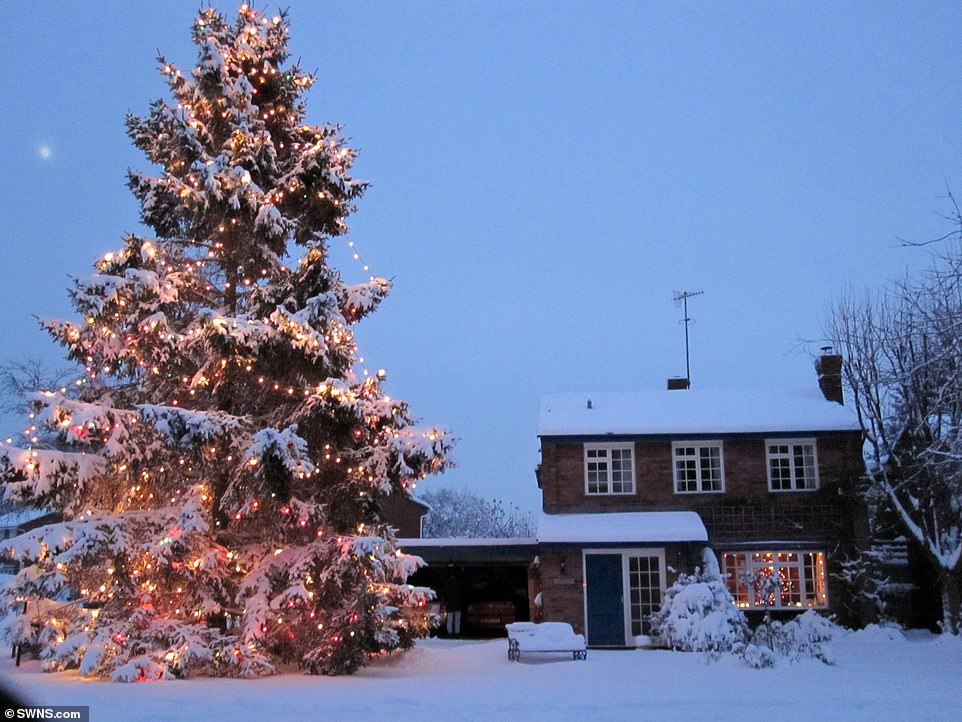 The Rowlands’ tree is now a focal point for the pretty village of Inkberrow, Worcestershire. It was planted four decades ago 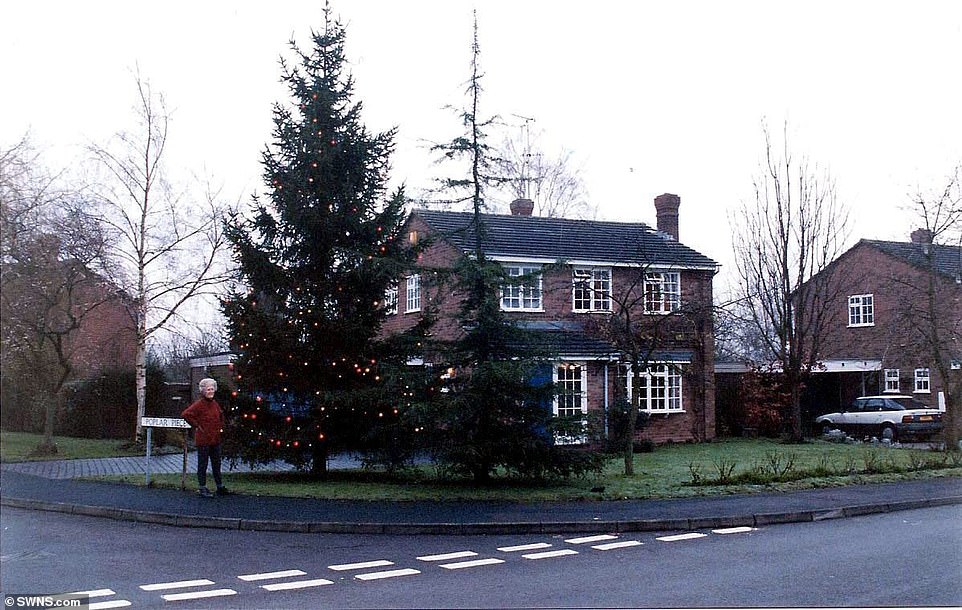 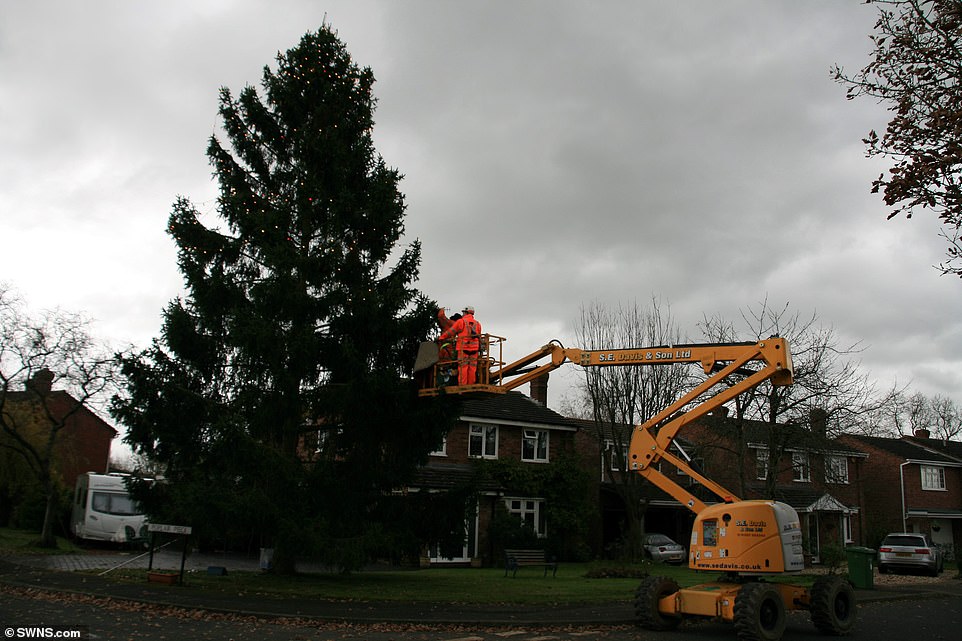 Mr and Mrs Rowlands’ tree now towers above their four-bedroom detached property and the couple hire a cherry picker to decorate it with more than 1,000 lights

Inkberrow is one of a handful of villages in the country which doesn’t have any street lights and the tree can be seen from a mile away at night when it is lit up.

A spokesman for the Forestry Commission said: ‘This is a remarkable tree which has obviously been taken care of.

‘Pine trees can grow to huge heights so time will only tell if this one grows any larger.’