Antibody tests might NOT be key to ending lockdown, Chief medical officer claims: Now Prof Chris Whitty returns from coronavirus battle to say immunity tests won’t help until ‘later in the epidemic’ even if they are developed amid huge row

Professor Chris Whitty said that such tests, which would show if someone has has a minor case of the infection and recovered, will be more effective ‘later in the epidemic’.

Because of the slow way antibodies are generated and the relatively small percentage of the population likely to have caught coronavirus at this stage, the tests are currently of limited use, he told the daily press conference.

It came after Britain’s hopes of going back to normal suffered another blow after a top scientist checking the tests for the Government said it could be a month before a workable test is available.

Professor Sir John Bell, from Oxford University, said the testing kits he has examined so far ‘have not performed well’ and ‘none of them would meet the criteria for a good test’.

Addressing the public this afternoon after completing his own coronavirus self-isolation, Prof Whitty, an epidemiologist, said:  ‘At this point in time we would expect quite a small proportion of the population has probably got antibodies.

‘There’s two reasons for that. There’s the proportion actually infected and then there’s a period of time between somebody getting an infection and antibodies being routinely detectable.

‘And it depends which kind of antibody you’re talking about how soon that is.

‘Most of the labs that have looked at this would say 21 to 28 days would be the kind of timescale you’d be talking about.

‘They do tend to be more effective later in the epidemic.’ 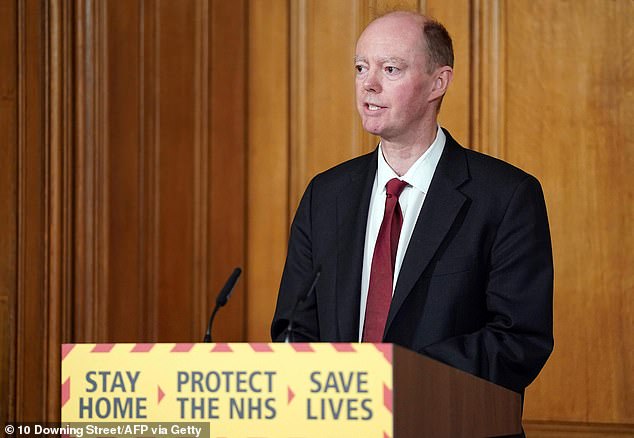 Professor Chris Whitty said that such tests, which would show if someone has has a minor case of the infection and recovered, will be more effective ‘later in the epidemic’ 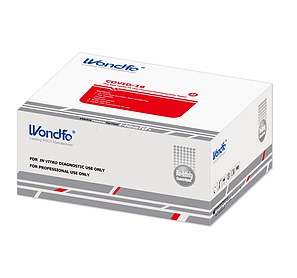 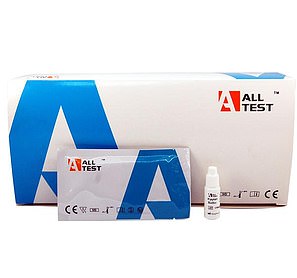 He added that it would be a mistake to discuss the next phase of managing the pandemic until there is confidence that the peak has been reached.

WHAT IS AN ANTIBODY TEST?

An antibody test is one which tests whether someone’s immune system is equipped to fight a specific disease or infection.

When someone gets infected with a virus their immune system must work out how to fight it off and produce substances called antibodies.

These are extremely specific and are usually only able to tackle one strain of one virus. They are produced in a way which makes them able to latch onto that specific virus and destroy it.

For example, if someone catches COVID-19, they will develop COVID-19 antibodies for their body to use to fight it off.

The body then stores versions of these antibodies in the immune system so that if it comes into contact with that same virus again it will be able to fight it off straight away and probably avoid someone feeling any symptoms at all.

To test for these antibodies, medics or scientists can take a fluid sample from someone – usually blood – and mix it with part of the virus to see if there is a reaction between the two.

If there is a reaction, it means someone has the antibodies and their body knows how to fight off the infection – they are immune. If there is no reaction it means they have not had it yet.

He said: ‘The key thing is to get to the point where we are confident we have reached the peak and this is now beyond the peak and at that point I think it is possible to have a serious discussion about all the things we need to do step-by-step to move to the next phase of managing this.

‘But I think to start having that discussion until we’re confident that that’s where we’ve got to, would I think be a mistake.’

Downing Street said today it will seek refunds from companies that cannot improve the failed antibody tests ordered by the Government.

‘No test so far has proved to be good enough to use,’ the PM’s official spokesman said, raising accuracy concerns.

‘We continue to work with the testing companies, we’re in a constant dialogue with them and we give feedback to them when their products fail to meet the required standards.

‘If the tests don’t work then the orders that we placed will be cancelled and wherever possible we will recover the costs.’

The head of testing at Public Health England also said none of the tests it had evaluated were good enough for public use.

Professor John Newton, director of health improvement at Public Health England, said the tests were not accurate enough on people who had only had mild illnesses.

The tests are considered to be crucial to ending Britain’s nationwide lockdown because they will give authorities a clear picture of how many people have caught the virus already and shaken it off.

Currently, statistical guesswork is the only way of working out how many people might already be immune and therefore potentially safe to return to normal life.

Estimates suggest up to five million people could have been infected to date.

In a glimmer of hope after a dark week for Britain, the number of people dying of COVID-19 has now fallen for two days in a row and today dropped 30 per cent from 621 yesterday.

Today’s death count is the lowest since March 31, last Tuesday, when it was 381, and marks a 39 per cent fall from the UK’s worst day so far, Saturday, when the deaths of 708 people were recorded.

The number of new cases is also lower than it was for almost all of last week, with the 3,802 new positive tests 2,101 fewer than 5,903 yesterday and only the second time since March that the number has been below 4,000.

England accounted for 403 of the fatalities while Scotland, Wales and Northern Ireland declared 36 more deaths between them over the past day.

The figures come as Prime Minister Boris Johnson remains in hospital with ‘persistent’ symptoms after he was admitted last night because his fever had lasted for 10 days after he was diagnosed.

He spent the night in hospital but aides say he is still trying to work and he said in a tweet he is ‘in good spirits’.