Australians are facing an organised campaign by anti-vax and far-right activists to undermine confidence in life-saving medicines and a public health response which continues to save lives every day.

That’s not hindsight. On August 25, I tweeted that unions were feeling the impact of organised, extremist, anti-vax and far-right campaigns. We were witnessing fringe interests attempting to infiltrate unions – not to help workers in any way – but for their own selfish political gains. 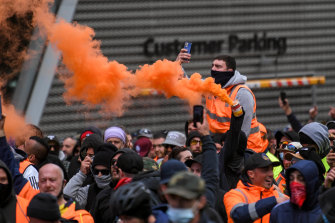 Protesters set off flares in the city on Tuesday in the second day of demonstrations.Credit:Eddie Jim

What happened on Monday in Melbourne was the continued organised assault by these groups on our unions who are working to protect members, save jobs, keep workplaces safe, and protect our health system.

The union currently under attack, the CFMEU, has worked tirelessly to keep its industry open for the benefit of workers and the Victorian economy. It has developed COVID-safe plans, run advertising to encourage members to vaccinate and put resources into testing on sites.

The attack on the union orchestrated by the far right should be a warning to all political leaders about the challenges we face in rebuilding our nation after this pandemic.

The union movement is not the only organisation subject to this co-ordinated and dangerous attack from extremists. We have anti-vax politicians in our state and federal parliaments.

A billionaire mining magnate is funding an ex-Liberal parliamentarian to send anti-vax texts to millions of Australians.

An upper house member of the Victorian Parliament attended Monday’s protest and gave vocal support to the extremists, a federal Senator tweeted his approval of the violence.

Some mainstream media voices have whipped up opposition to the health officials trying to manage the virus, and the people who regulate the safety of our medicines are receiving death threats.

Fear, anxiety and trauma are fertile ground for division and extremism. Poverty, insecure work and economic distress can supercharge this division.

That our unions are seeing this fear and anxiety should not surprise anyone. But anyone who cares about social cohesion and ensuring we get through this pandemic should know that left unchecked these groups will continue in their attempts to undermine confidence in the response to the virus.

I can assure our members and the Australian community that the far-right extremists will get no comfort or support in the union movement. The far-right are predators feeding on fear and distress, they flourish in times of economic insecurity, and seed hatred among those who feel left behind or left out.

“We are all in this together” was a great political slogan in 2020, but as the pandemic has dragged on, the reality for many people’s lives is economic devastation and deep social dislocation.

The truth is that the hardships and trauma of this pandemic are not being borne equally. In fact, the pandemic has revealed the deep inequality built into our economy.

Rather than acting to address this and seizing the opportunity to rebuild a better, more equitable society and workforce, the Morrison government has overseen an explosion in insecure work. Those in insecure work are the most afraid of economic lockdowns because they lose their jobs.

The union movement will continue to do our part in supporting social cohesion during the pandemic and advocating for a fair and equitable recovery.

We will continue to do our part to encourage vaccinations and backing the decisions of public health officials. We will continue to fight for safe workplaces, for better jobs, for more financial support for those hit hardest by the pandemic.

Our political leaders must lead. The void left by the lack of a coherent public health advertising campaign from the federal government is profound. 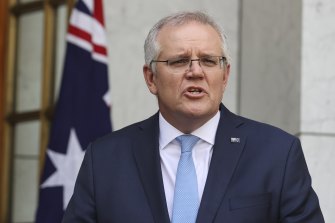 We have joined artists, community groups, employers, state governments and dozens of other groups in putting forward our own campaign in support of the vaccines, but Australians should be hearing this direct from the Morrison government.

Workers have borne the impact of this pandemic and laboured tirelessly to keep us as safe as possible. They have asked very little of the federal government but have been let down at every turn – on securing supply, administering the rollout and administering quarantine.

The rise of the far-right spreading dangerous conspiracy theories did not start on Monday. We saw how dangerous they are in the United States when they stormed Congress early this year.

We need our leaders – all of them – to stand up because it is people’s lives at stake. It is the unvaccinated who are dying in the United States and the unvaccinated who ignore health advice on masks like they are right now in Melbourne who spread the virus which can kill others.

We need the Morrison government to denounce misinformation and fear-mongering – online, in the media, in Parliament, even in its own ranks.

To recover from this pandemic we will need political leadership of a kind which currently seems to be in very short supply.

Sally McManus is the secretary of the Australian Council of Trade Unions.