Anthony Albanese's office has been hit overnight by an anonymous dossier claiming to be authored by five Labor staffers accusing senior team members of bullying and divisive behaviour.

Titled "A Letter to Anthony Albanese from five concerned opposition staff", the dossier appeared online on a specially-created webpage for about 30 minutes shortly after 9pm. At 10am on Tuesday it had re-appeared online at a new address. 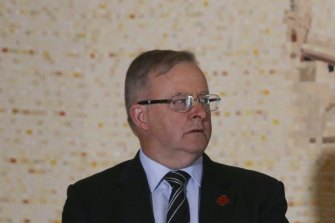 The office of opposition leader Anthony Albanese has been hit by allegations of bullying and divisive behaviour in an anonymous dossier.Credit:Alex Ellinghausen

"We have no doubt that unless the culture of the leader’s office improves – we will absolutely not be able to effectively contest, let alone win, the next election," the note said. "We owe it to ourselves, and to Australia, to try to as much as we can to maintain a healthy and supportive culture in our workplace … Active bastardry, and praying (sic) on people’s personal lives and vulnerabilities crosses a line."

Last month Albanese's chief of staff Tim Gartrell told an all-staff meeting to end cliques and backbiting inside the opposition leader's office. Shortly after the meeting, the leader's office deleted and re-booted its Slack internal messaging system, erasing months of private and group communication between staff in the office.

On Tuesday, a spokesman for Albanese said they were treating the 1500-word document as a "fake". He said the leader's team had no official plans to take action or to investigate the dossier. He noted a belief inside the office that a foul-mouthed email reproduced in it was fraudulent. The email was purportedly written by a senior adviser who the Herald and The Age have decided not to name because its contents have not been corroborated.

The dossier included photos of the ALP leader with office staff and email screen-shots and names several members of Albanese’s team. The authors claimed they had been prompted to take action because "polite, incidental conversations have not sufficiently laid out the situation" and that Labor's election chances hung in the balance.

"A destructive culture of bullying has been created … which is now dividing and distracting every tier of the federal opposition. Each conflict leads back to one person," it read, while noting a "self-appointed ‘in-group’" was "wedging the opposition from within."

"It has been nastier, crueller and more personal than any in recent memory. It has resulted in multiple good people leaving, and others seeking medical support."