Athens, Greece – Athens police have battled hundreds of protesters late into the night after demonstrations marking the tenth anniversary of the killing of a teenager by police, which has become a rallying cry for anti-authority movements and leftists in Greece and beyond.

A Greek and international medley of black-clad, hooded protesters on Thursday manned barricades made of materials dragged from corner parking lots and building sites in Exarchia, the central Athens neighbourhood where 15 year-old Alexandros Grigoropoulos was killed in 2008.

Riot police fired teargas and stun grenades from a carefully-held distance of two blocks from each barricade. Occasionally, protesters made sorties towards them or stampeded in rapid retreats back onto the square, but the battle seemed to be a stalemate.

Protesters were momentarily concerned with a series of explosions loud enough to be felt as body blows, that came from a school just off the square.

“It’s OK, they’re not police, they’re ours,” came the reassuring reply from a protester who called out to people within the school compound. Flames flickered from inside.

Some protesters held bottled beers as they took a break from the fighting. Others held Molotov cocktails. Broken glass and concrete pavement slabs lay everywhere. At one blockade, a group of middle-aged women pleaded with Polish protesters not to set fire to the materials.

“We have babies sleeping upstairs,” they pleaded, pointing to their apartment block. Later, one woman murmured to the others, “We didn’t go to Krakow or Warsaw to do this mischief.” Other protesters spoke in Arabic or Albanian-accented Greek. Some spoke English.

By midnight, four cars had been burned and at least 30 protesters had been taken into custody. Exarchia, which has long been a stronghold of anarchists and leftists who regularly battle with police, wraps around the downtown campus of the Athens Polytechnic, the site of a student uprising 45 years ago against the country’s then-military dictatorship.

In November 1973, police stormed the Polytechnic grounds, killing dozens of students barricaded inside. After the restoration of democracy the following year, Greece passed a law that grants tertiary education campuses asylum from police interventions. Protesters can ultimately retreat onto the Polytechnic grounds to escape arrest.

In this already restive neighbourhood, police shot Grigoropoulos in the heart during an altercation in 2008. In court, the accused officer claimed he shot in the air to intimidate Grigoropoulos, but the bullet ricocheted off an overhanging balcony.

The forensic analysis backed up this version, but many of Thursday’s protesters didn’t accept it.

“The officer’s gun was magic. When he fired into the air, the bullet found its mark,” chanted high school students during the march earlier in the day.

Some carried thick dowel rods, others brought Molotov cocktails, and a few came armed with hammers. They smashed traffic lights and shattered marble masonry on the sides of banks to throw at police. Several looked young enough to have been born around the time of the original shooting.

Not everyone was sympathetic to the protesters. “What they need is a good beating,” commented one elderly man as he watched a group smash marble slab. Anti-riot police threw tear gas and prevented them from reaching Syntagma Square as they attempted to march on parliament.

Coming just after the financial crisis of 2008 that triggered Greece’s economic depression, Grigoropoulos’ death developed into a rallying cry for a disillusioned and angry youth. Even though unemployment has declined since the heart of the crisis in 2013, 37 percent of people between the ages of 15 and 24 remain without work.

According to some estimates, as many as 700,000 young people have left Greece to find work.

“Money to the banks and bullets to the young,” read a banner carried by one protest group, chanting anti-capitalist slogans.

Much of the daytime rally was organised by groups to the left of the ruling Syriza party, including the Front of the Greek Anticapitalist Left, formed in 2009, and the Socialist Workers’ Party, a Trotskyist group formed in the late 1960s. 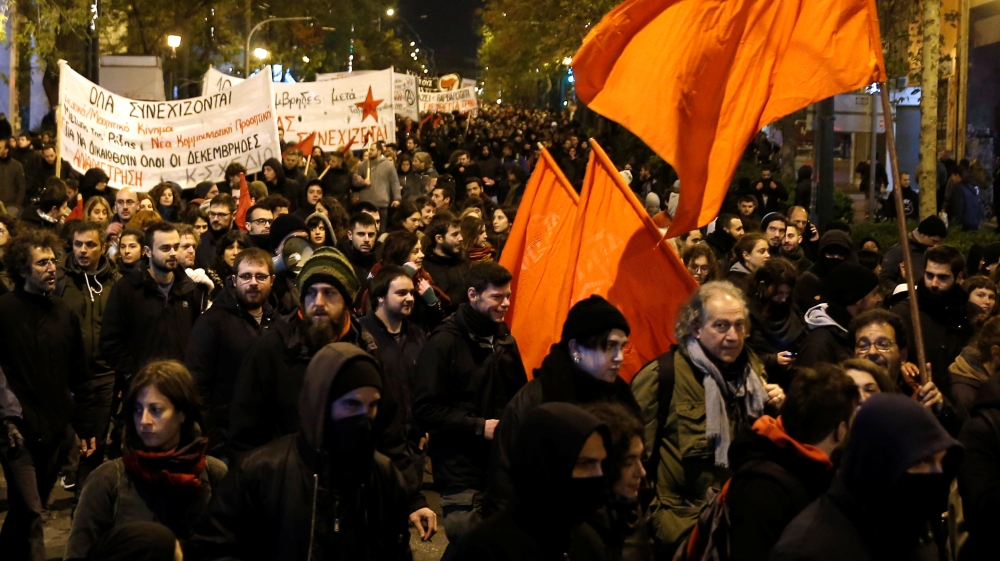