Moscow: Russian President Vladimir Putin has proposed a truce with the United States in cyberspace, without acknowledging that his country has repeatedly used technology to attack elections from the Ukraine to the United States, steal emails from the US Defence Department to the White House, and develop some of the world's most sophisticated disinformation efforts.

Putin issued an unusual written statement outlining a four-point plan for what he called a "reboot" in the relationship between the United States and Russia in the field of information security. Moscow and Washington, he wrote, should issue "guarantees of non-intervention into the internal affairs of each other, including into electoral processes". 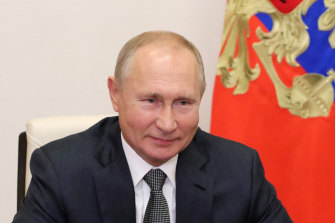 He urged a bilateral agreement "on preventing incidents in the information space," modelled on Cold War-era arms control treaties.

But beyond the conciliatory language, Putin's statement offered no hint that Moscow was prepared to make any specific concessions on its greatly accelerated use of cyber weapons over the past decade — sometimes directly, sometimes through proxies. Russia continues to deny interfering in American politics, while insisting that the US meddles in Russian politics by backing opponents of Putin.

"As we have said more than once, there is no basis" for claims that Russia has meddled in American elections, Foreign Minister Sergey Lavrov, said in his own statement. "We are in favour of a professional and constructive discussion of all existing problems and claims at the negotiating table."

President Donald Trump has said repeatedly that he was tempted to believe Putin's insistence that Russia had no role in the 2016 election, although the spokesman for the National Security Council, John Ullyot, dismissed Putin's offer on Friday.

"It is hard to take such statements seriously when Russia, China, Iran and others have sought to undermine our election process," Ullyot said, following Trump in suggesting the problem goes beyond Russia.

"It is possible that this offer is a further effort by Russia to create divisions in the United States," he said.

Russia has floated similar proposals before, including when Putin met with Trump in Helsinki, Finland, in 2018. Trump warmed to them at first, saying he would work with Russia to create "an impenetrable cyber security unit" designed to assure "that election hacking, and many other negative things, will be guarded and safe."

His declaration was mocked by many, including some of his staff, who asked how the US would jointly patrol cyberspace with one of the world's leaders in cyber espionage. Around the same time, the US was placing malware in the Russian electric grid and making no effort to hide it, in hopes of deterring Moscow from attacking the American grid.

It was not clear if Putin was calling for the reset because of the intense focus on Russian activity around the 2020 election, or because firms like Microsoft have identified continued Russian attacks, some from groups linked to the military and Russian intelligence agencies.

This time, Putin is calling for a reset less than six weeks before an American presidential election that could put an outspoken critic of the Kremlin — former Vice President Joe Biden — in the White House. The move appeared at least in part to be an attempt to present a friendlier face in response to American officials' recent statements that Russia had mounted clandestine efforts to weaken Biden in the presidential race.

Christopher Wray, the director of the FBI, warned last week that Russia was actively pursuing a disinformation campaign against Biden. That led to a rebuke of Wray from Trump. And a recent CIA analysis concluded that it was likely Putin was continuing to approve and direct interference operations aimed at raising Trump's reelection chances.

"It's possible that in the Kremlin they understand that Biden is likely to win," said Andrei Kortunov, director general of the Russian International Affairs Council, a research organisation close to the Russian government. "They are preparing for a Democratic administration that could be even tougher toward Russia than a Republican one."

Both Russia and China have periodically proposed cybersecurity treaties, including requirements that everyone logging into the internet be required to use their true identity. While such proposals might limit illicit activity — if they could be enforced — they would also make it easier for the world's autocrats to hunt down dissidents.

Most academic experts have concluded that the treaties that led to arms reductions from the 1960s forward were unlikely to work in cyberspace. Nuclear weapons were in the hands of a few states; cyber weapons are controlled by countries, criminal groups, activists and teenagers. Often, states conduct their cyber activities through proxies, including criminal groups. All those would make treaties fairly useless.

Nonetheless Putin seemed enthralled by the idea. "These measures are aimed at building up trust between our States, promoting security and prosperity of our peoples," Putin's statement said. "They will significantly contribute to ensuring global peace in the information space."

Two Russian political analysts with ties to the Kremlin said in interviews Friday that even if Putin's proposal was a genuine attempt at improving the relationship with Washington, they did not expect it to go anywhere. Kortunov said Putin had not signalled that he was ready to give any substantial ground in the dispute over election interference.

"It's obvious that the Kremlin would, of course, prefer not to quarrel with Washington, no matter the election result," Kortunov said, noting the risk of a President Biden seeking to impose new sanctions on Russia. "But they would like to avoid these challenges without paying a serious price."

For instance, Kortunov noted, the Kremlin has not made any public effort to rein in Yevgeny Prigozhin, the Russian business magnate indicted by the United States for helping spearhead interference in the 2016 election.

On the contrary, Russia's relationship with the West has only deteriorated further in recent weeks. The unexplained nerve-agent attack on Alexei Navalny, the Russian opposition leader now recovering in Berlin, stirred revulsion in European countries including Germany and France — places where Putin had been able to count on some measure of sympathy. And Putin's backing for Alexander Lukashenko, the Belarusian autocrat who launched a brutal crackdown on pro-democracy protesters last month, demonstrated the Kremlin's hard-line pursuit of a post-Soviet sphere of influence at the expense of human rights.

Fyodor Lukyanov, a Moscow foreign-policy analyst who advises the Kremlin, said Friday's cybersecurity proposal underscored that Putin is now in a far more conciliatory mood than he was at the height of the Ukraine crisis five years ago. But he said American distrust of Russia was so deep that he did not expect Putin's proposal to be taken seriously in Washington — and that relations could take another step downward if Biden wins the presidency.