More than one week after the US election, Americans are living in two alternate realities.

The first involves Joe Biden as President-elect, seeking to convey a sense of order as he prepares to enter the White House in 69 days. 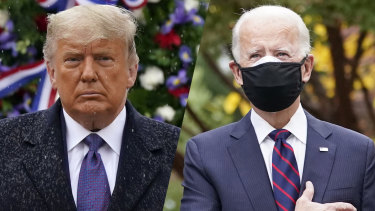 The second features the ever-defiant incumbent Donald Trump, refusing to accept the result as he mounts a series of legal challenges in a bid to retain power.

And somewhere in between is a hot mess over election integrity: from conspiracy theories about dead people casting votes en masse, to claims and counterclaims of officials rigging ballots to manipulate the outcome.

No one expected an entirely seamless election against the backdrop of an unprecedented pandemic — particularly after Trump made it clear he wasn’t prepared to stand down without a fight.

But you can’t help but wonder how much simpler things might have been if the US voting system had something many other democracies hold dear: an independent federal oversight body. 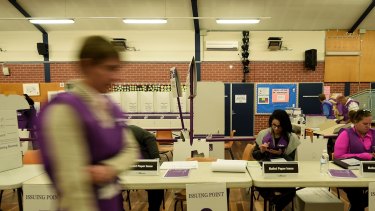 Australian electoral commission staff prepare for voters to arrive minutes before the Blacktown South Public School opens so people can vote in the Australian Federal election in 2016Credit:Kate Geraghty

Australians are lucky enough to have such an agency when they go to the polls, in the form of the Australian Electoral Commission, whose job it is to manage electoral rolls, deliver polling services, educate the public about their rights, and tally the results.

The AEC, and federal voting in general, is also governed by a national law — the Commonwealth Electoral Act — which is applied uniformly across the country.

America’s decentralised voting system, by contrast, is a patchwork quilt of complex rules and regulations underscored by partisan politics.

Each jurisdiction has a chief election official, known in most places as the Secretary of State, with elections administered through different counties — of which there are more than 3000 across America. 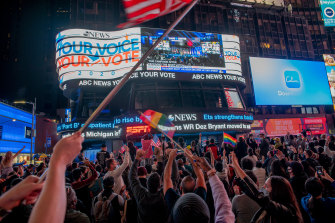 People celebrate as President-elect Joe Biden is declared the winner of the US presidential election.Credit:Bloomberg

What’s more, key electoral decisions — such as who gets to vote, how boundaries are redrawn, or the location of ballot boxes — are effectively determined by elected Democrats or Republicans in each jurisdiction.

The end result is a system that can too often be gamed to disenfranchise voters, entrench power for the ruling party, or sow doubt about the legitimacy of the outcome.

Take the contentious decision last month of Texas Republican Governor Greg Abbott to significantly reduce the number of drop-off points where voters could hand in their mail-in ballots.

At a time when people needed more options, not less, to cast their votes safely as coronavirus raged, it was yet another example of voter suppression in one of the country’s most populous states.

Or what about Republicans crying foul that the media had called the election for Biden, with many now echoing Trump’s tweet on Sunday: “Since when does the Lamestream Media call who our next president will be?”

Quite apart from the obvious fact that US elections have been carefully called by news organisations for decades, this is the case because of the absence of a national electoral commission.

And then there are the legal challenges against the outcome itself. Trump is yet to provide tangible evidence of “widespread voter fraud” even after months of railing against mail-in ballots — an option that has existed for years in states such as Utah, Colorado and Oregon, but has expanded significantly this year due to COVID concerns.

He has, however, found it easier to add to confusion in an already distrusting electorate thanks to the inconsistencies of the electoral system.

For instance, some states have strict “exact match” laws, where a voter's signature on a ballot paper must match exactly the signature on their government file, otherwise the vote might not count.

However, other states have different rules. The Pennsylvania Supreme Court recently determined there was no need for the signature on a person’s electoral file to match that of their mail-in ballot. Not surprisingly, Team Trump is now disputing the election result in the state.

Also in Pennsylvania, the court determined that votes could continue to be counted if they came in three days after election day, provided they were postmarked prior to the November 3 poll.

But other states did not allow such extended timeframes, fuelling Trump’s wild claims of “illegal” and “legal” votes.

The good news is that Biden has an opportunity to reform the system. In the wake of the 2018 midterm elections, a series of important laws were drafted with the aim of making US elections cleaner and fairer.

Known as “H.R.1” the legislation packaged proposed “the development of a national strategy to protect US democratic institutions”; the replacement of “patchwork and cumbersome registration systems” with automatic voter registration; and greater oversight of election vendors.

Voter roll purges, which have previously resulted in many being unfairly removed from rolls in states such as Georgia and Ohio, would also be prohibited under the new law, as would partisan gerrymandering, whereby district boundary lines are redrawn to give parties political advantage.

H.R.1 passed in the Democrat-controlled House along party lines, but stalled in the Senate, where Republicans had the majority.

Biden now has another chance to fulfil his party’s promise of reform if the Democrats are able to seize Senate control by winning Georgia’s “run-off” elections on January 5. If that fails, America’s new unity president should put his negotiations skills to the test by working with Republicans to find a way forward.

Understand the election result and its aftermath with expert analysis from US correspondent Matthew Knott. Sign up to The Sydney Morning Herald‘s newsletter here, The Age‘s here, Brisbane Times‘ here and WAtoday‘s here.