An American couple who arrived at Pompeii as Italy went into lockdown finally toured the ancient city today after waiting for two months in a nearby town for the site to reopen.

Colleen and Marvin Hewson, retirees from Michigan, were first in line when the archaeological site reopened to the public Tuesday following Italy’s coronavirus lockdown.

Their long-delayed visit capped an unlikely adventure that had stranded them in modern Pompeii, a small tourist town, since early March.

‘We have been patiently waiting since then for the ruins to open,’ Colleen Hewson said as the couple got the chance to stroll through the ruins of the Roman city destroyed in A.D. 79 by a volcanic eruption, trailed by journalists capturing another milestone in Italy’s reopening.

‘Here we are, we finally made it inside. It only took two months,’ Marvin Hewson added.

For the Hewsons, seeing Pompeii was meant to be the highlight of a trip celebrating his 75th birthday and their 30th wedding anniversary. 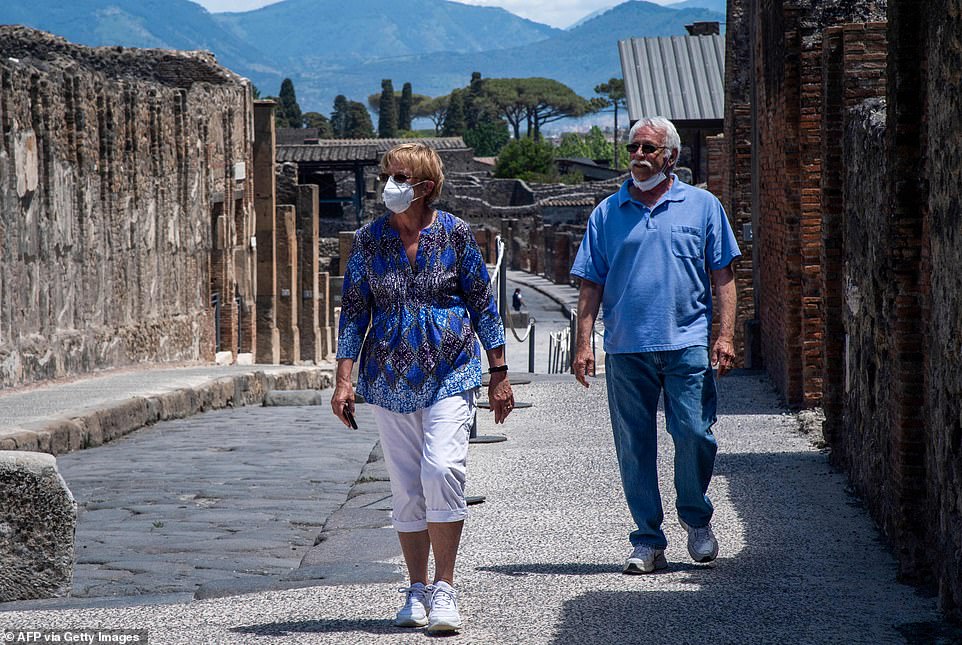 Colleen and Marvin Hewson, from the United States, visit the archeological site of Pompeii after a two-and-a-half month wait, near Naples, southern Italy today 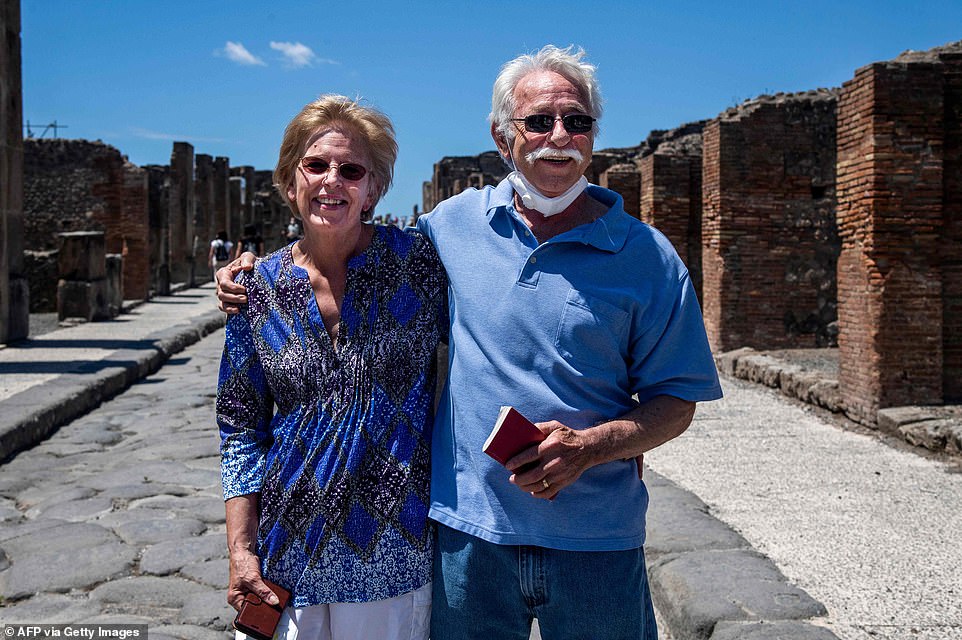 US couple from Detroit, Marvin and Colleen Hewson, who spent the lockdown since March 7 in a nearby Bed and Breakfast, visit the archeological site of Pompeii today, as the country eases its lockdown aimed at curbing the spread of the COVID-19 infection, caused by the novel coronavirus 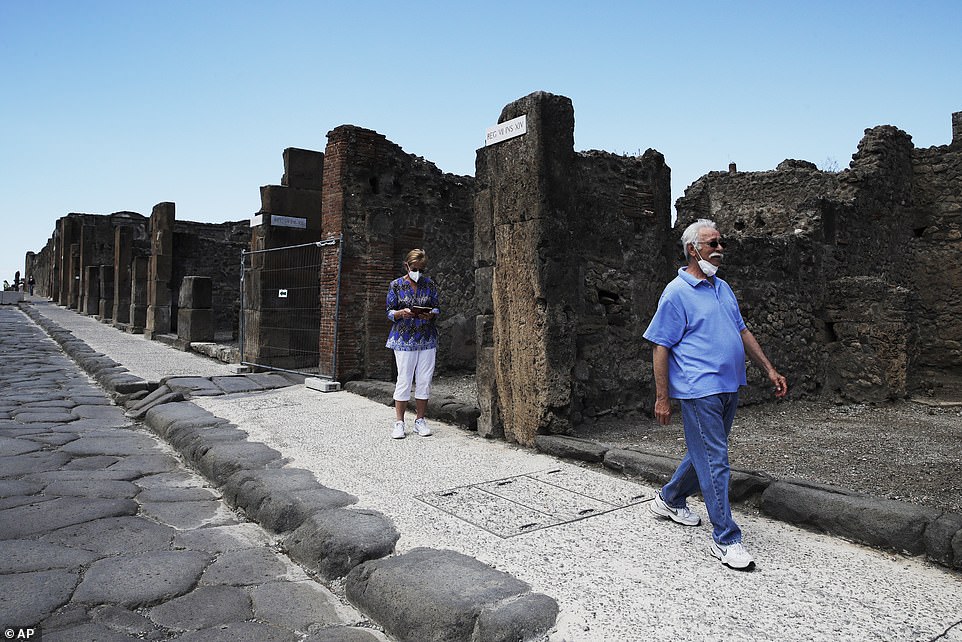 Colleen and Marvin Hewson, from the United States, visit to the archeological site of Pompeii, near Naples, southern Italy, today

Marvin Hewson, a history buff, had visited once while serving in the U.S. Navy in the 1960s and always vowed to get back; the trip was his wife’s gift to him.

The couple from Clinton Township, Michigan, which is near Detroit, arrived in Rome on March 5 for the vacation of a lifetime, her first time overseas.

By the time they made it to the gates of Pompeii several days later, the popular tourist site was closed and Italy was under lockdown due to the coronavirus epidemic that broke out more than 500 miles to the north. 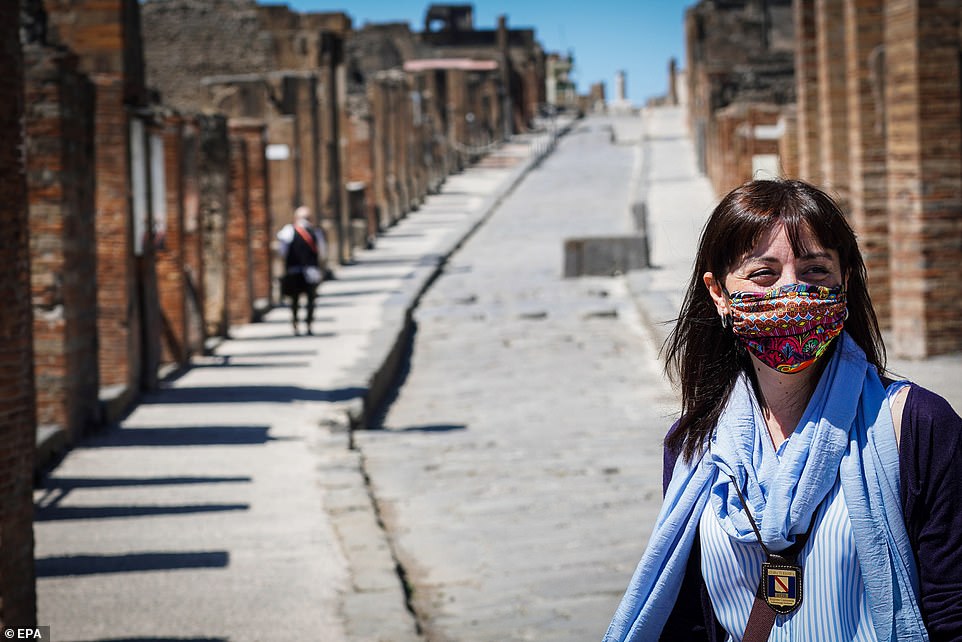 People are pictured on the ancient city of Pompeii’s reopening day near Naples, Italy. Today  marks the first phase of two weeks that will permit a walk along the streets of the ancient city with social distancing guidelines having been implemented by the Ministry of Health 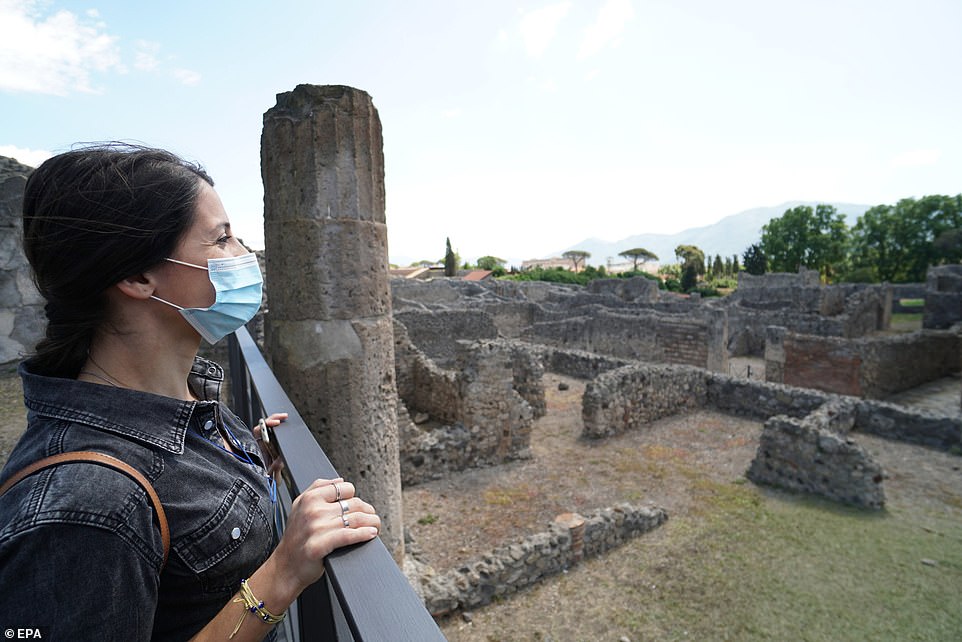 A woman visits the Domus of Cornelio in the ancient city of Pompeii, located in the zone of Pompeii Scavi, which reopened to the public in Pompeii, near Naples, Italy today 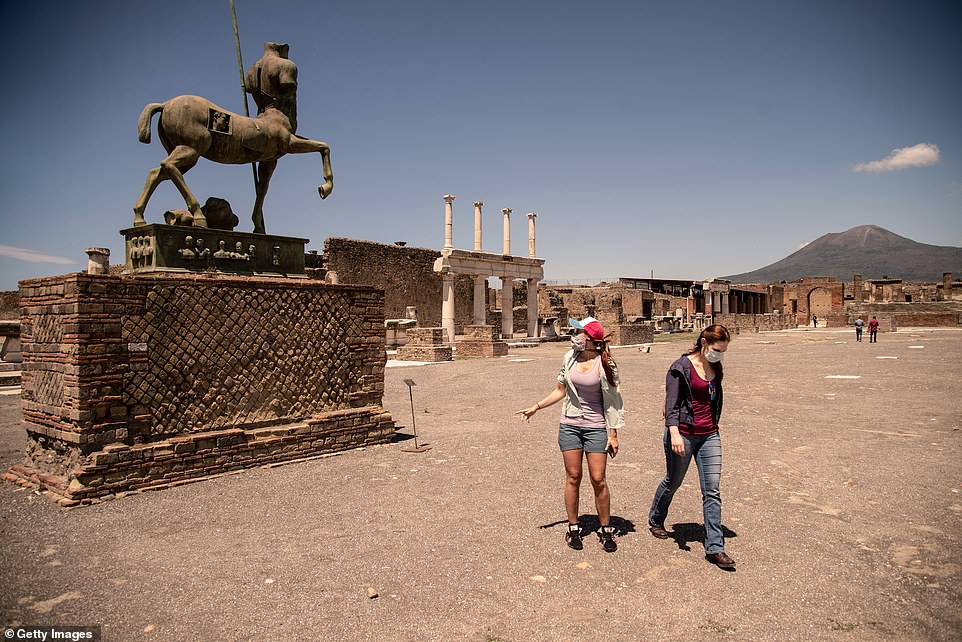 Visitors wearing face masks are pictured in the Forum on the day of the reopening of the Archaeological Park of Pompeii today in Pompeii, Italy 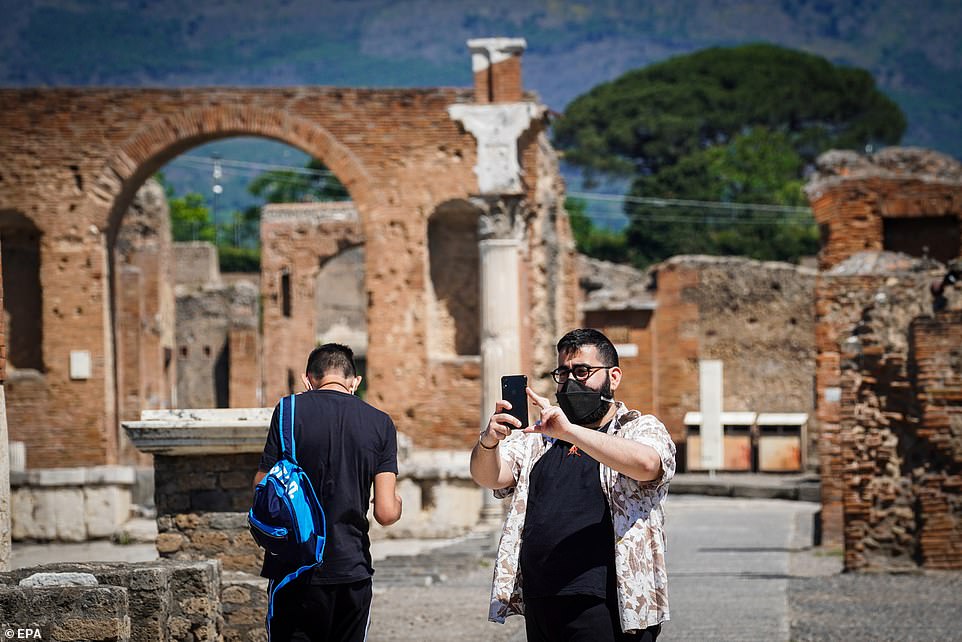 A man takes a photo on the reopening day of the ancient city of Pompeii, near Naples, Italy today 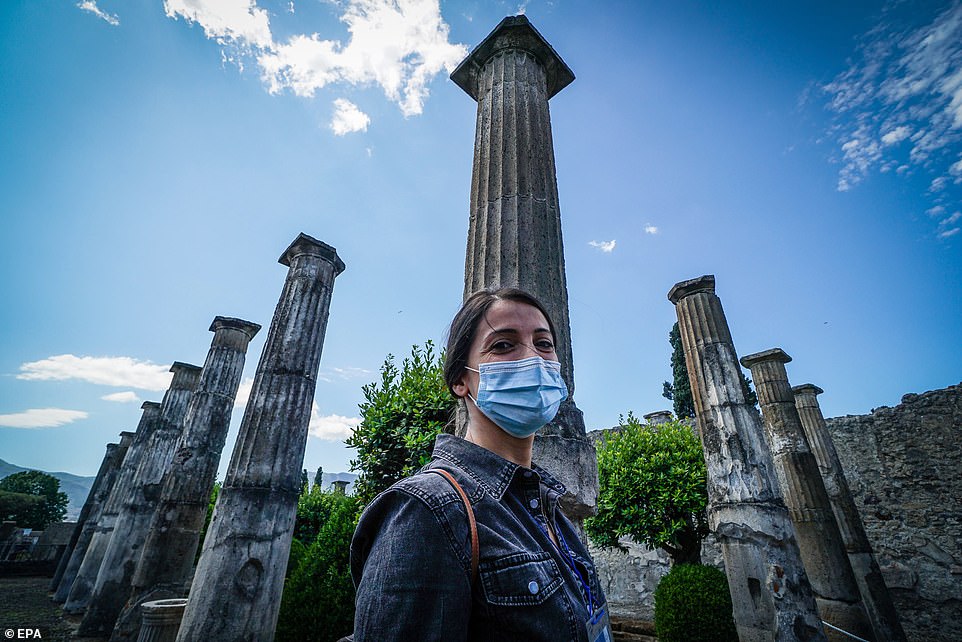 A woman wearing a face mask visit the Domus of Cornelio in the ancient city of Pompeii, located in the zone of Pompeii Scavi which reopened to the public today in Pompeii, near Naples, Italy

Attempts to book flights out failed, and they resigned themselves to life under lockdown.

Back in the United States, their four adult children relaxed when they realized their parents were far from the epicentre of Italy’s virus outbreak and in good local hands.

‘We made a great connection with our Airbnb host family,’ Colleen, 63, said. 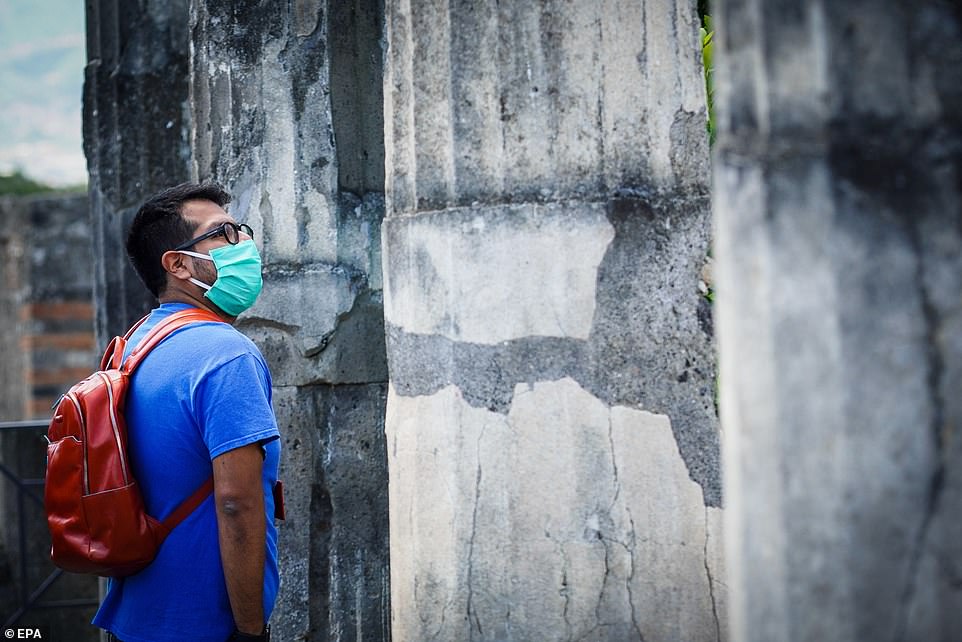 A man wearing a face mask looks at the historic ruins of the city of Pompeii, which reopened to tourists today near Naples, Italy 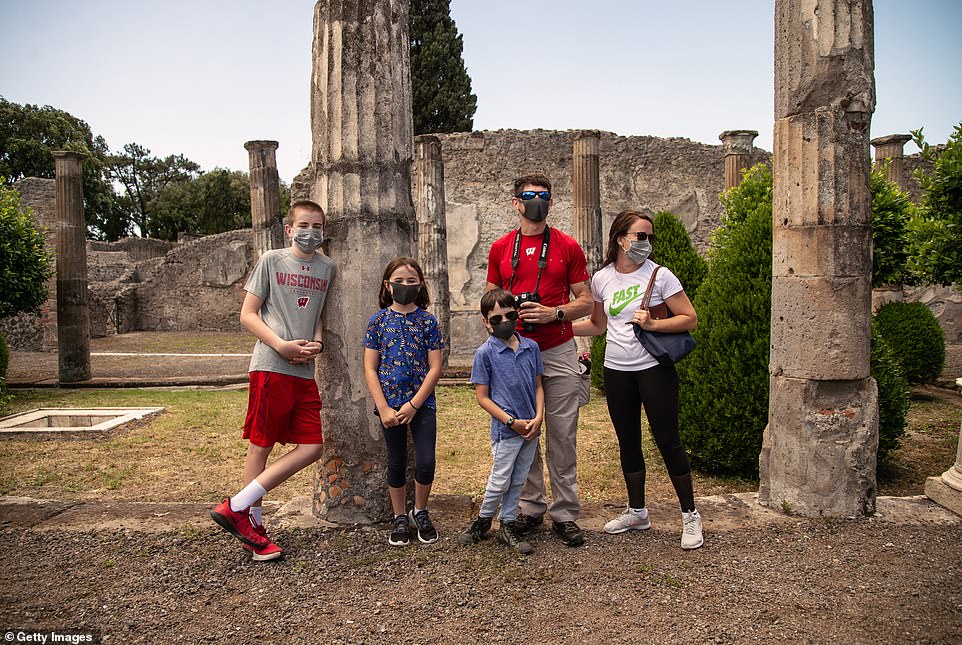 Visitors posing with masks inside a domus (home of the upper classes in Ancient Rome) on the day of the reopening of the Pompeii Archaeological Park today in Pompeii, Italy. Many Italian businesses have been allowed to reopen, after more than two months of a nationwide lockdown meant to curb the spread of Covid-19 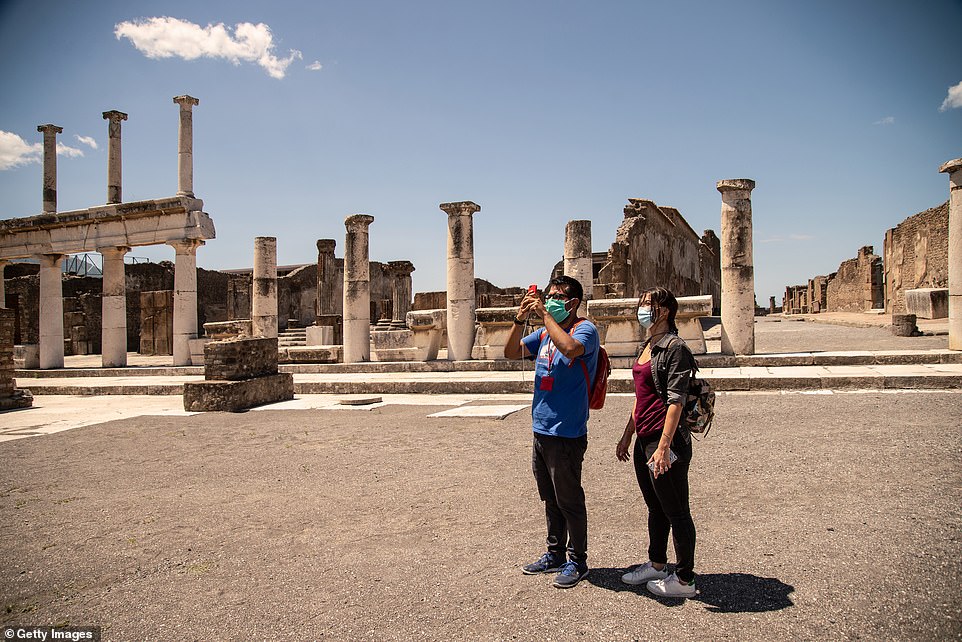 Many Italian businesses have been allowed to reopen, after more than two months of a nationwide lockdown meant to curb the spread of Covid-19. Pictured: Visitors take photographs in the Forum of the ancient city of Pompeii today 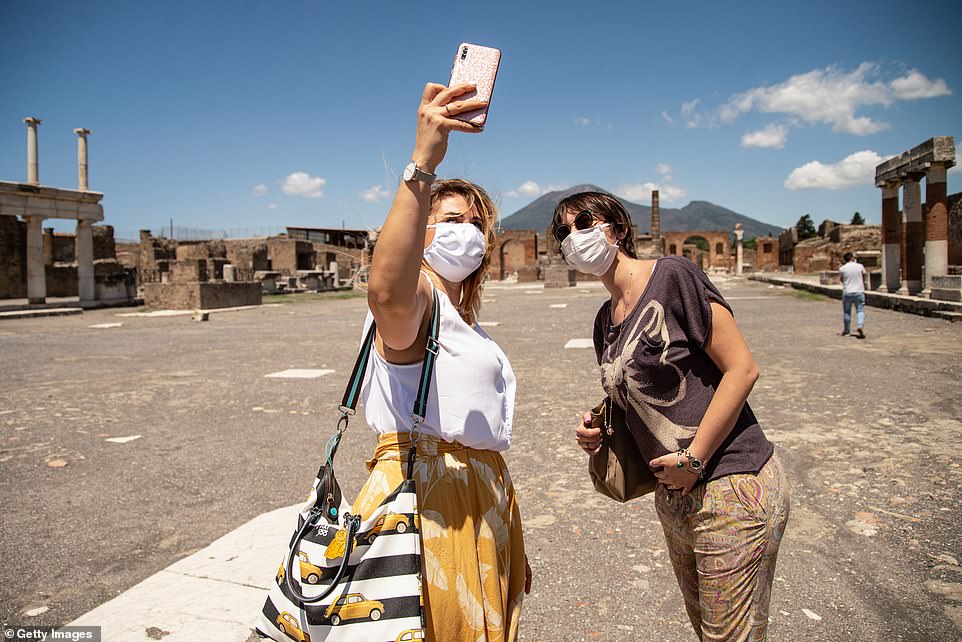 Two visitors pose for a selfie in the Forum on the day of the reopening of the Pompeii Archaeological Park today in Pompeii, Italy

The host, Fabio Sposato, translated news for her and her husband, and helped keep them busy, tasking them with picking oranges and lemons from trees near the condominium where they stayed and teaching them to make limoncello.

‘It helped to pass the time,’ Marvin said.

Under lockdown, they fell into a routine, walking more than 7,000 steps a day, often to a grocery store near the archaeological site that allowed time to sit on a bench and gaze upon the ruins, ‘wishing we could be inside,’ Colleen Hewson said. 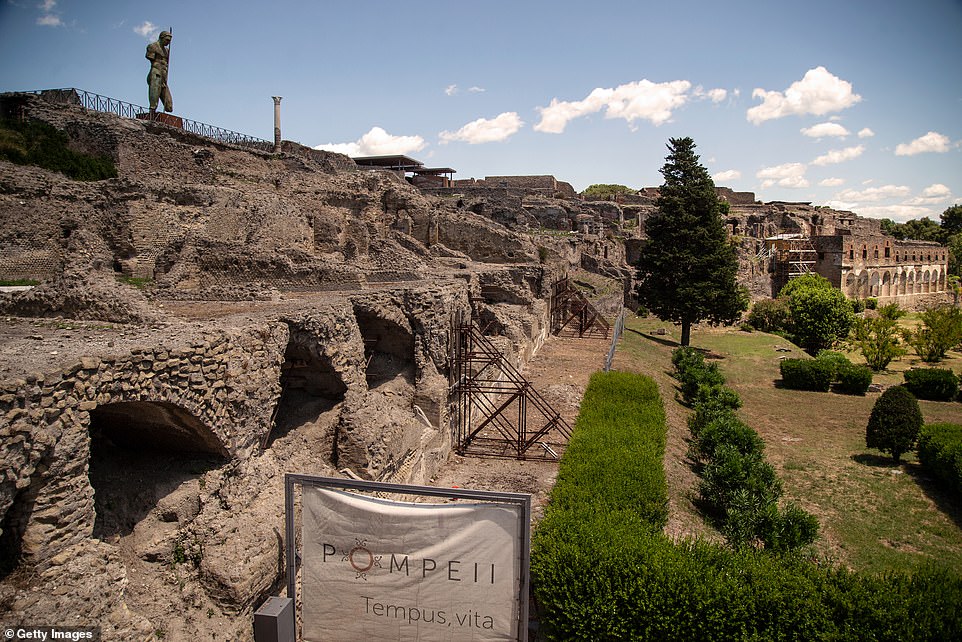 General View of the Pompeii sites on the day of the reopening of the Archaeological Park on today in Pompeii, Italy 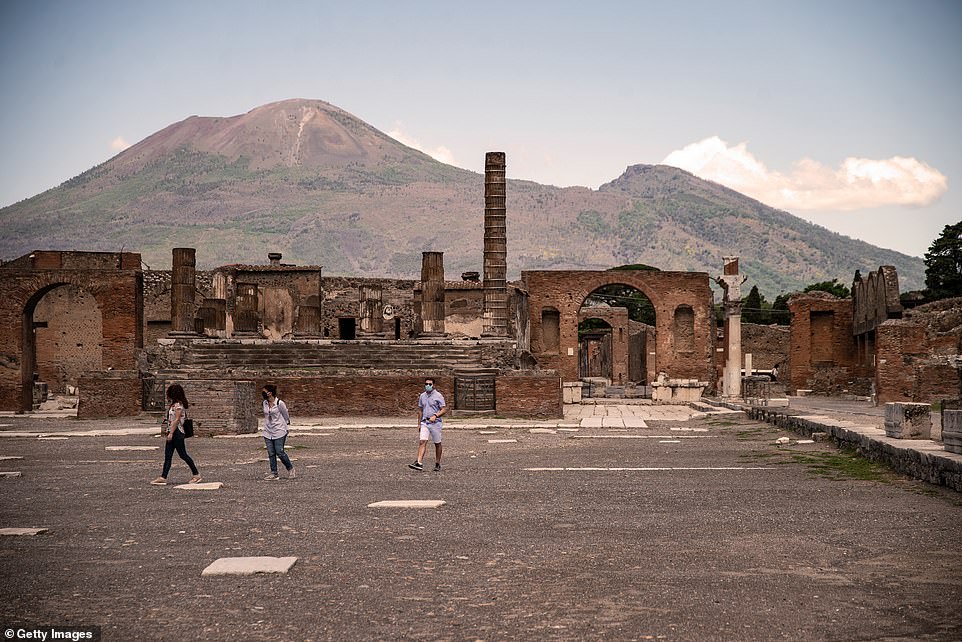 Visitors wearing face masks walk through the Forum earlier today, the reopening day of the Archaeological Park of Pompeii near Naples, Italy 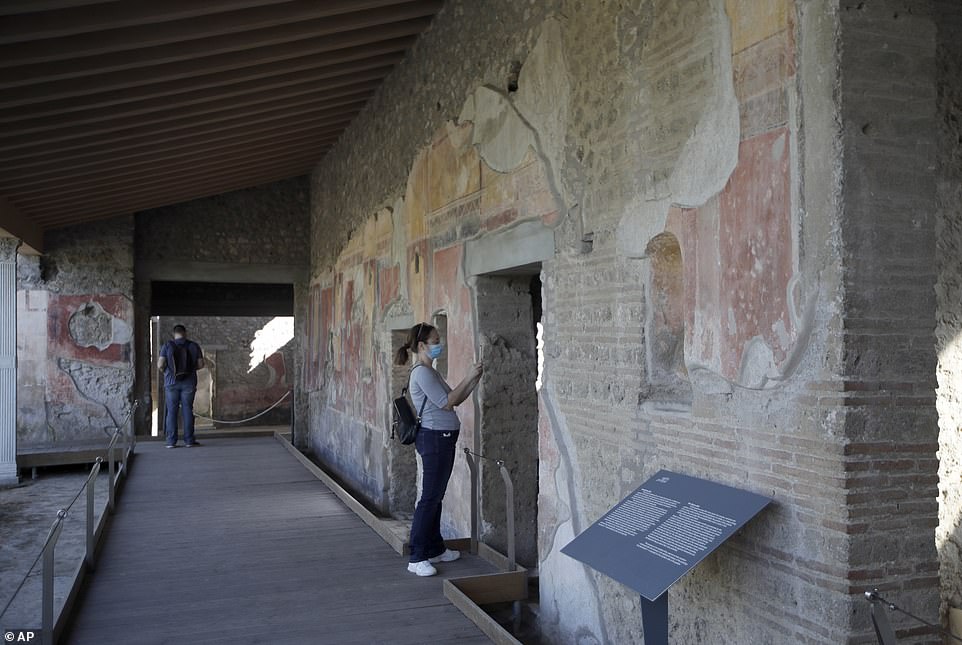 A woman visits the House of Giulia Felice (Julia Felix), at the archaeological site of Pompeii, near Naples, southern Italy today 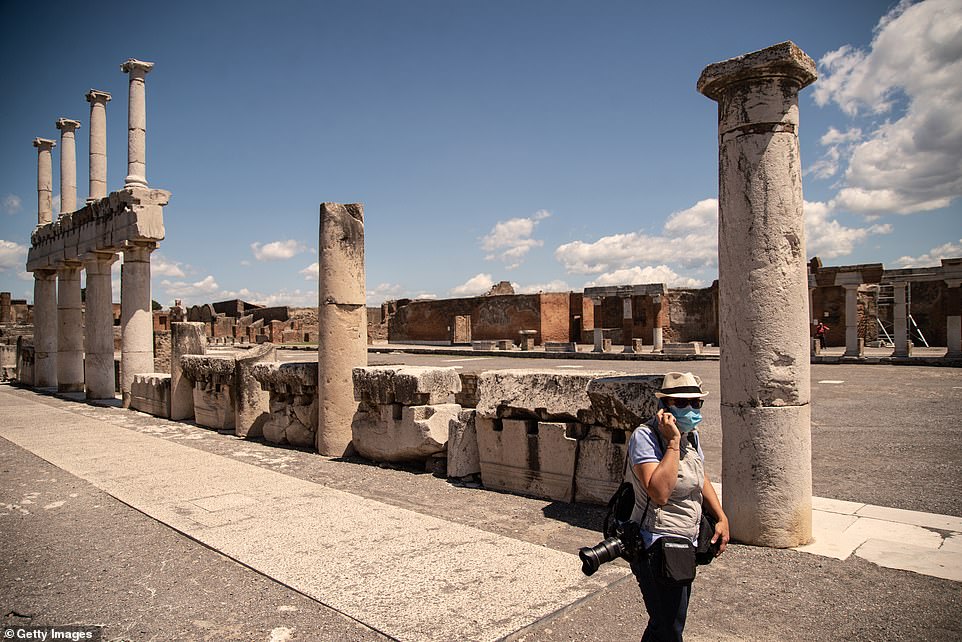 A woman walks through the Pompeii Forum on the archaeological site’s reopening day today, in Pompeii, near Naples, Italy

In all those weeks, ‘our Italian never got better,’ she quipped, and they would use charades to communicate things they were looking for in the grocery store.

The couple was leaving Pompeii on Tuesday for Rome, where they planned to spend a couple of days sightseeing before returning home to Michigan at long last.

Since Italy’s restrictions on movement have eased, Sposato hosted the couple for dinner with his family and drove them to the Amalfi coast. 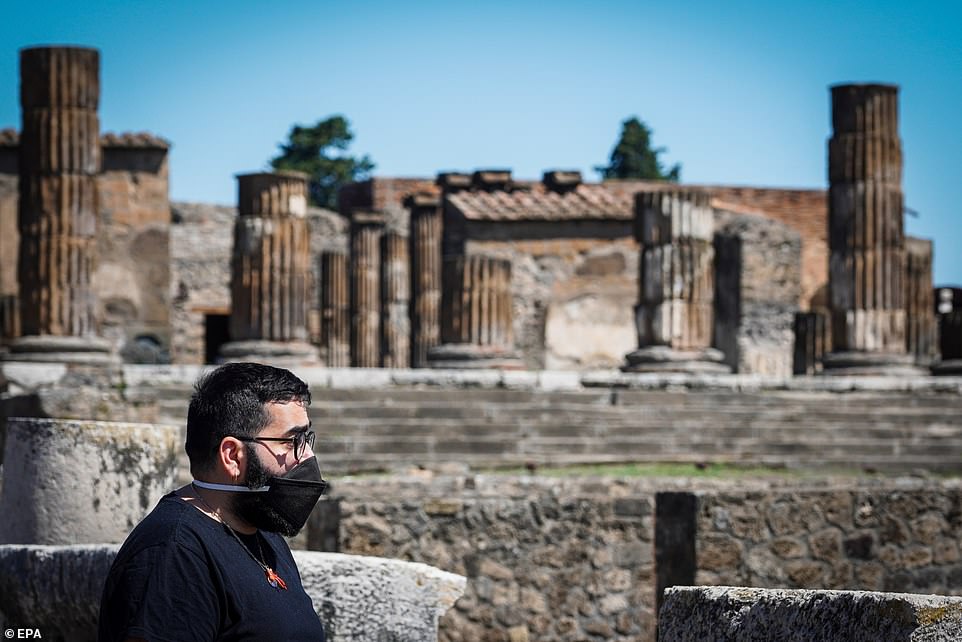 A man stands wearing a face mask near the ancient ruins of Pompeii, near Naples, Italy today

‘We took care of them as if they were our parents,’ Sposato said. ‘We did what we could to make them comfortable respecting the restrictions that were in place.’ 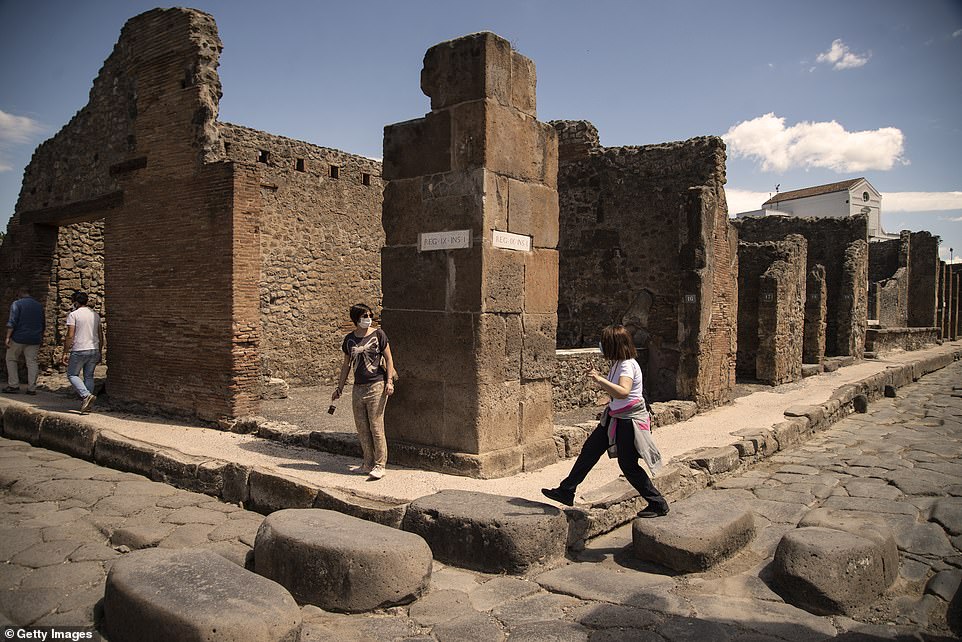 Visitors wearing masks walk along ‘via dell’Abbondanza’ on the day of the reopening of the Pompeii Archaeological Park today in Pompeii, Italy 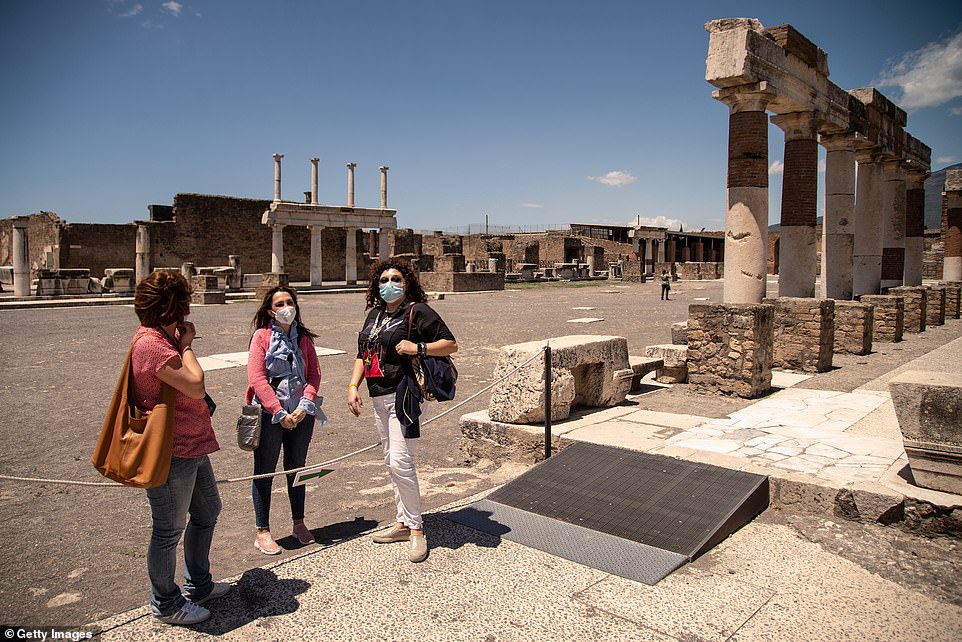 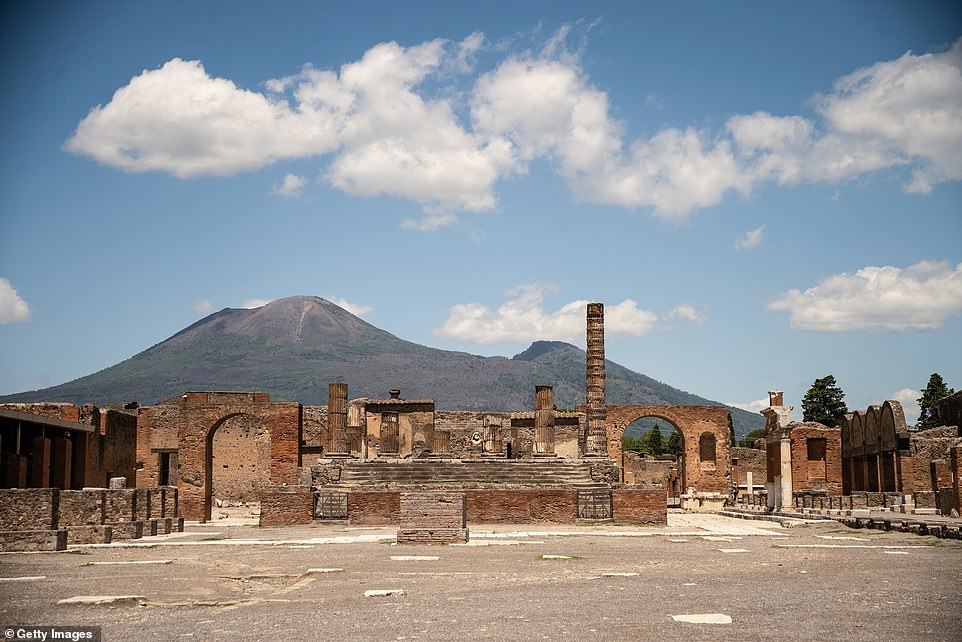 General view of the deserted Forum on the morning of the reopening of the Pompeii Archaeological Park today in Pompeii, Italy

The couple said they feel lucky to have been able to spend the lockdown in such a beautiful setting.

From their condominium’s rooftop, the couple could see Mount Vesuvius to one side, and the island of Capri to the other.

‘We looked at real estate. It would be a dream,’ Marvin said. ‘We saved a lot of money because all of the stores were closed. We really are thinking of coming back.

The exceptionally-preserved remains of the city covered in volcanic ash by the eruption of nearby Mount Vesuvius nearly 2,000 years ago in 79 A.D. are usually the country’s second-most visited site after the Colosseum in Rome.

But today, many of its most important ruins, like its stone Amphitheatre or Temple of Apollo, lay hauntingly empty.

Visitors are being guided on a mandatory route, with a second itinerary to be added on June 9. Tickets cost five euros (£4.45), but people will have to reserve ahead and have their temperatures checked by a thermal scanner on entering.

Areas with only one way to enter and exit are now closed off, to avoid crowding, while those with more space – even some which were previously closed to the public – are now open.

Pompeii had just celebrated the culmination of a long £91.6million restoration when the coronavirus crisis hit Italy and museums and cultural sites were closed in March.

The project, which began in 2012, was paid for largely by European Union funding and enlisted large teams of archaeologists, architects, engineers, geologists and anthropologists.

The collapse of the ‘House of the Gladiators’ after days of heavy rain in 2010 underscored the risk to Pompeii’s treasures after years of neglect and mismanagement.

UNESCO warned that multiple buildings at the site were at risk and extensive restorations, and consistent upkeep, were needed.

New treasures seen by few tourists before the lockdown included the ancient frescoes and centuries-old tile floors of the ‘House of Lovers,’ a two-story home that had been closed to the public since 1980 after an earthquake, and the ‘House of Orchards,’ featuring intricately detailed frescoes of fruit trees and birds.

Earlier, in October, archaeologists discovered a vivid fresco of an armour-clad gladiator, his opponent gushing blood beside him, on the walls of what was believed to be a tavern housing fighters and prostitutes.