Air quality is improving in countries under coronavirus quarantine with nitrogen dioxide levels dropping in Spain, Italy and China

Air quality is improving in countries under coronavirus lockdown as nitrogen dioxide level in quarantined areas has dropped, experts say.

Despite dramatic decreases in toxic fumes over cities in Italy, Spain and China it is far too early to know if a long-term change has been made.

Images by the United States space agency NASA are clear: In February, the concentration of nitrogen dioxide (NO2) fell dramatically in Wuhan, China, the epicentre of the COVID-19 pandemic, passing from an indicator that was red/orange to blue.

NO2 is mainly produced by vehicles, industrial sites and thermal power stations.

As China moves past the peak of its crisis, however, recent images by the European Space Agency (ESA) show a resurgence in NO2 emissions. 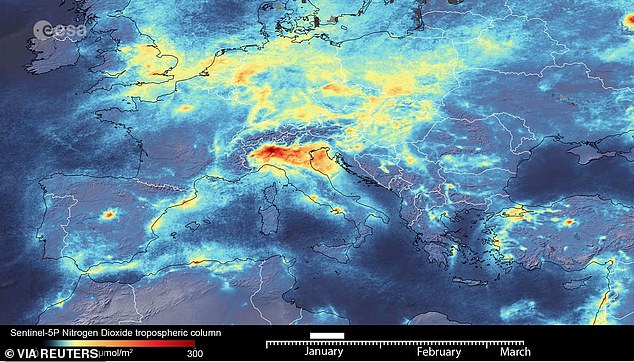 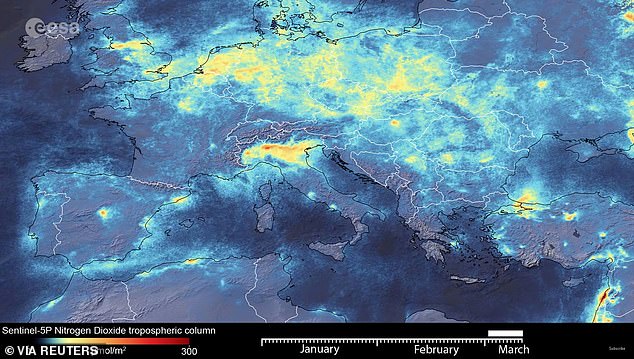 Pictured above are the reduced emissions following coronavrus lockdowns around Europe. This reduction is particularly visible in northern Italy which coincides with its nationwide quarantine 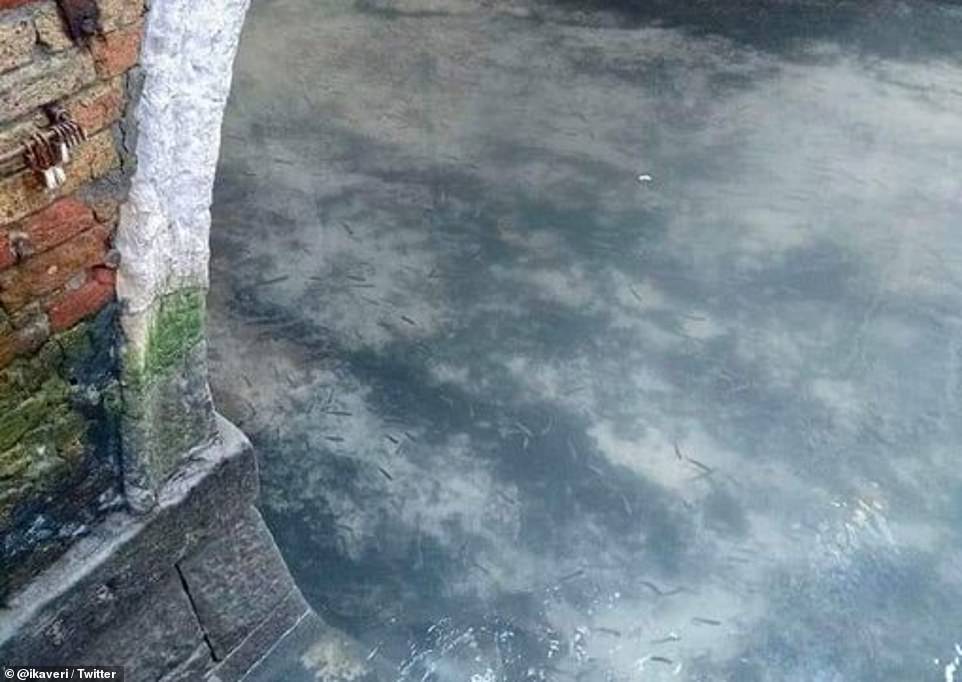 Schools of fish have been seen under the usually murky water of Venetian canals in the wake of Italy’s coronavirus lockdown. Sediment is no longer being brought to the surface since boat rides have effectively stopped

A striking reduction has also been observed by the ESA in northern Italy, which has been locked down to fight a spread of the coronavirus.

‘NO2 is a short-lived pollutant, with a lifetime in the atmosphere of about one day,’ said Mr Vincent-Henri Peuch, from the EU earth surveillance programme Copernicus.

‘As a result, this pollutant stays near the emissions sources and can be used as a proxy of the intensity of activity in different sectors,’ he said.

Mr Fei Liu, an air quality researcher at NASA’s Goddard Space Flight Centre, noted the change in China, saying: ‘This is the first time I have seen such a dramatic drop-off over such a wide area for a specific event.’ 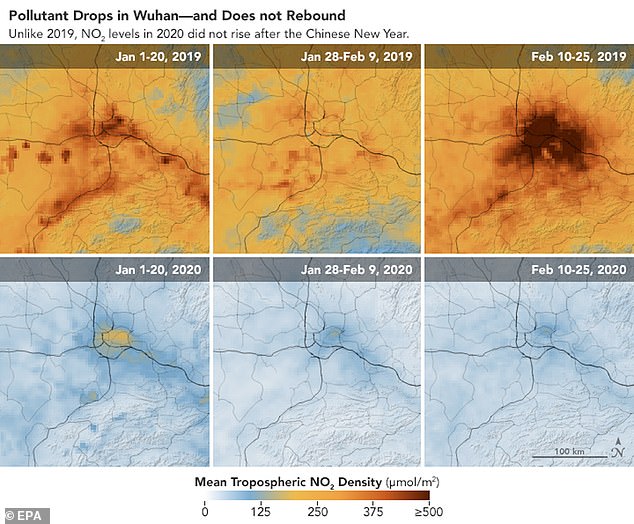 NASA maps showing NO2 levels over Wuhan during three periods in 2020: (left to right, top row) from January 1 to 20 (before Lunar New Year), from January 28 to February 9 (around New Year celebrations), and from February 10 to 25 (after the event). Pictured below are the 2020 values compared to the same periods in 2019 for reference with orange shading, representing NO2 levels 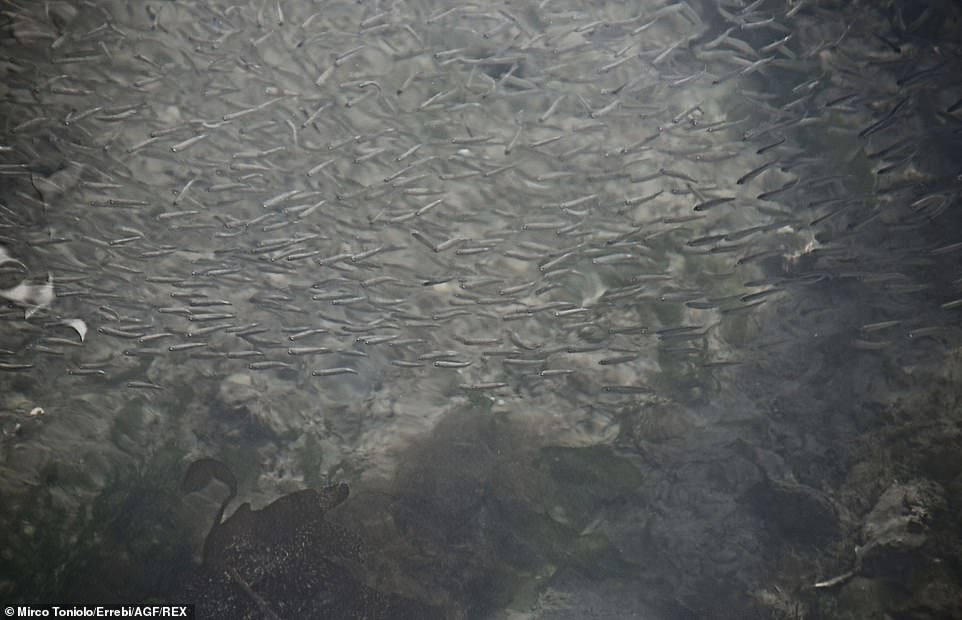 Fish swimming in the canals in Venice this month with the Italian economy grinding to a halt because of coronavirus, sparking a drop in pollution in the city’s waterways

Even during the economic crisis more than a decade ago, the decrease in NO2 levels ‘was more continuous in time’, according to EEA air quality specialist Alberto Gonzalez Ortiz.

In northern Italy, ‘average NO2 concentration levels have been almost halved on average,’ Mr Peuch said.

The pollutant can provoke serious inflammation of the respiratory system.

As for other countries or regions that have told inhabitants to remain confined at home, notably Argentina, Bavaria, Belgium, California, France and Tunisia, specialists are poring over the data to see if the trend is similar.

Meanwhile, less NO2 does not necessarily mean purer air.

The air in Paris was also rated as moderately polluted last Friday owing to the presence of fine particles and NO2 even though the population had already been confined at home for three days.

Mr Peuch explained that the concentration of polluting matter can vary with the weather. 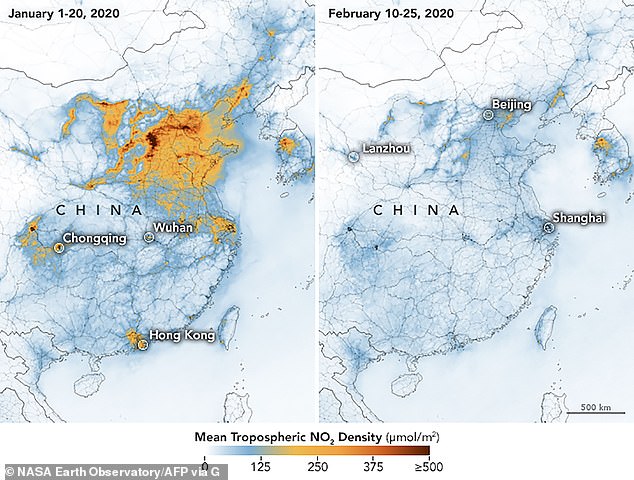 NASA and Earth Observatory shows maps showing nitrogen dioxide (NO2) values across China from January 1 to 20, (before the quarantine) and February 10 to 25 (during the quarantine)

‘Some emissions sources, like energy production and residential use of energy are likely not to be decreasing markedly when more people have to stay at home,’ he noted.

The concentration of so-called PM2.5 and PM10 particles and carbon monoxide (CO) are ‘also expected to be reducing over time,’ he said.

These are a mixture of minute solid particles and liquid droplets present in the atmosphere with diameters of 2.5 and 10 micrometres (microns).

In Europe some of the major pollutants caused by factories and road traffic are still present as the lockdown has not been in place as long as in China.

So what should we expect in terms of improvements to health, given that air pollution provokes around 8.8 million premature deaths each year according to a recent study?

Fine particles irritate the eyes and throat and inhibit breathing.

In extreme cases, elderly people and those who suffer from asthma risk death if not properly treated.

Confinement measures thus protect in two ways, by reducing the risk of Covid-19 infection and by easing pollution from road traffic, according to a group of French doctors known as Air-Sante-climate.

It is nonetheless hard to know how much benefit the world’s population will actually experience because, according to the health experts, ‘what will have more impact is the long-term exposure’, Mr Gonzalez Ortiz said.