Under normal circumstances the national holiday of a faraway country such as Ukraine would barely deserve a mention.

But the whole world was watching on Wednesday when President Volodymyr Zelensky gave a speech congratulating his people on the 31st anniversary of Ukraine’s independence from the former Soviet Union.

As Zelensky said, the celebration was extraordinary because it was not supposed to happen.

Wednesday was also six months to the day after Russian President Vladimir Putin launched his barbaric invasion. If it had succeeded, Ukraine would have been reduced to a vassal state or ceased to exist at all. 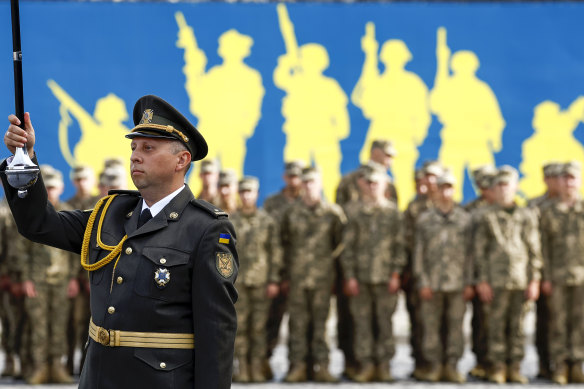 Ukraine has celebrated 31 years of independence from the former Soviet Union.Credit:Getty Images

In fact, Ukraine has survived. “We are the free people of independent Ukraine,” Zelensky said.

Ukraine marked the day with the defiance and quirky individualism which the world has come to admire since February 24. It towed the charred hulks of scores of destroyed Russian tanks on to Kyiv’s main street. It was a macabre taunt aimed at the hubris in Putin’s expectation that he would soon stage a real triumphal parade of his troops after a quick victory.

But, while Ukraine has grounds to celebrate, it is still far too early to declare victory.

While Ukraine has fought valiantly, Putin is not showing any sign of giving up. Having failed to overthrow Ukraine’s government or conquer more than a chunk of its territory, Putin is now trying to terrorise the population into submission with air bombardment. In the latest atrocity, a Russian missile attack killed at least 22 innocent Ukrainians on Thursday at a railway station in the town of Chaplino.

While his army has suffered awful casualties, on Friday Putin signed a decree that will try to replace them by calling up another 137,000 conscripts.

Meanwhile, Ukraine’s army does not yet seem capable of winning a decisive victory. It has stabilised the frontline, but it has not been able to throw Putin out of the territory in the country’s south and east which he seized over the last eight years.

A few months ago, Ukraine’s military leaders talked about a counter-offensive but this has not happened.

Australia, the US and its European allies now face a series of difficult choices.

Some, such as influential US foreign policy analyst John J. Mearsheimer, say that the west is “playing with fire” and it should start putting pressure on Ukraine to accept a peace where Putin keeps his gains.

He argues that allowing the war to drag on indefinitely raises the risk it will escalate into a nuclear conflict. Russia is already playing nuclear roulette by deploying its troops next to the Zaporizhzhia nuclear power station in the occupied Ukrainian city of Enerhodar. It has mocked the international community by refusing access to United Nations inspectors.

While this doomsday scenario is terrifying, the west cannot simply let Putin bluff his way to victory. We cannot abandon Ukraine and reward Putin for his aggression. Australia and its allies have no choice but to support Ukraine.

Yet, this raises a new question of whether to accept that the war will drag on indefinitely and hope Putin eventually caves or whether to try to win the war decisively.

In practice, the former means a continuation of the current policy of providing weapons in limited quantities to ensure Ukraine can hold its ground while the latter involves supplying massive quantities of the most advanced weapons so Ukraine can deliver a knock-out punch.

Those who want to limit arms shipments to Ukraine argue that if Putin loses too badly it increases the risk that he will do something even more crazy.

They are betting that the unprecedented economic sanctions imposed on Russia will gradually bring Putin to the negotiating table.

Yet prolonging the current war of attrition carries the risk that Ukraine and its allies will grow tired of the war before Putin does.

Russia has started limiting gas supplies to the European Union. It could be hard to maintain support for the war in the EU which will face a cold winter and possibly an economic recession.

US President Joe Biden has provided vital leadership by announcing on Ukraine’s national day $3 billion of additional military aid, the largest package of aid since the war started. It includes high-tech weapons such as anti-aircraft missiles, artillery, counter-drone defences and radar equipment.

Australia has already delivered or promised $385 million of military aid and it should look for new ways to contribute either militarily or economically.

The longer the war goes, the clearer it becomes that Putin must be stopped. Each day brings new evidence of his brutality.

He must not get away with starting an invasion and seizing the territory of a sovereign state. Australia and its allies must keep supporting Ukraine until Putin is defeated.