His formidable ability to both charm and devour his prey during cross-examination as a top defence barrister earned Chester Porter two epitaphs.

One, that he could walk on water, which he adopted in a book title. The other, he was not as fond of, as the ‘smiling funnel-web’.

Chester Alexander Porter QC died at the age of 95 on Monday. 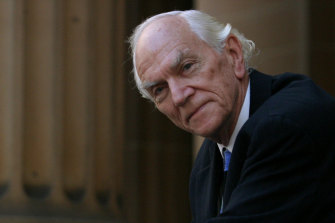 Fellow barrister Peter Clyne, once described his “doubtful pleasure” of being cross-examined by Porter, whom he admired. “That experience is rather like having your throat cut, quietly, courteously and swiftly,” Clyne said. “One moment you are cheerfully chatting away in the witness box. The next moment your head is rolling down the courtroom aisle. Your throat has been cut from ear to ear.”

It was a fate shared by Michael Drury, the chief witness for the Crown in the case against the corrupt detective Roger Rogerson in the mid-1980s. Porter defended Rogerson when he was fighting his first of several criminal trials, at this time, for attempting to bribe undercover policeman Mick Drury, to secure the acquittal of a Melbourne criminal.

Porter was said to have lulled Drury into a false sense of security by getting him to extol his virtues as an undercover cop, including his ability to lie. Porter was deft to demonstrate to the jury that Drury was a proficient liar.

His reputed “Chester Porter walks on water” followed his brilliant defence of District Court judge John Foord, who had faced charges of attempting to pervert the course of justice. A caricature in the National Times portrayed Foord in a T-shirt which read “Judge John Foord Can Thank the Loord”. 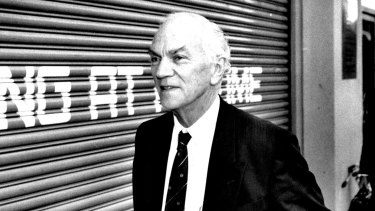 Chester Porter at an ICAC inquiry in 1992.Credit:Anee Pickett

Born to a Jewish family, Porter later converted to Christianity and reportedly referred to himself as a ‘Christian Jew’.

Porter was admitted to the NSW Bar in 1948 after studying law at the University of Sydney and later joining Denman Chambers. He moved to 12th Floor Selborne Chambers where he spent the most of his 52 years at the Bar before his retirement in 2000.

He was appointed Queen’s Counsel in 1974 and was involved in matters including: the Frederick McDermott, Voyager and Chamberlain royal commissions and the trial of Andrew Kalajzich.

Because of his formidable skill in handling the jury, Porter also found himself representing an insurance company facing a multimillion-dollar payout after a young woman became a paraplegic while skiing at Thredbo. After the case was settled, Porter was reported to have made an annual personal donation to a fund for spinal research with which the woman was associated.

He wrote three books in retirement based on his experiences: Walking on Water: A Life In The Law, The Gentle Art of Persuasion and The Conviction of the Innocent: How the Law Can Let Us Down.

Porter is survived by his wife, Jean, and two of his daughters, Mary Davis and Dr Josie McSkimming, as well as many grandchildren and great-grandchildren. His daughter Dorothy Porter, the renowned poet, died in 2008.

At the end of each day, we’ll send you the most important breaking news headlines, evening entertainment ideas and a long read to enjoy.  Sign up to The Sydney Morning Herald’s newsletter here, The Age’s here, Brisbane Times’ here, and WAtoday’s here.