On election night, as the blue sapphires that once adorned Victoria’s so-called Liberal crown were replaced with rubies and aquamarines, Matthew Guy hurried to dismiss the party’s losses. His message to colleagues was simple: voters wanted to change the government and that sentiment could assist the Coalition in November.

Pressed on his optimistic interpretation on Tuesday, Guy said he was also buoyed by heavy swings against Labor in the outer-suburban seats. 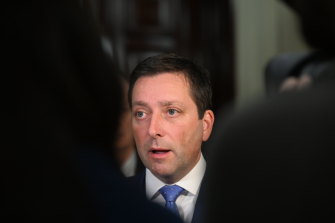 It’s hard to blame Guy for searching for a glimmer of hope in the wake of the Morrison government’s election defeat which wiped out a generation of high-profile Victorian Liberals and delivered large swings against those lucky enough to hold on to their seats.

Of the 39 federal electorates in Victoria, the Liberals, at best, will hold eight in the next Parliament – or just 21 per cent. And the two-party preferred swing against the Liberals in Victoria was 5.2 per cent.

If that swing is replicated at the November state election, the Liberal Party could find itself branded the “Tarago party”, a term once used to describe the Queensland Labor opposition in 2012 when it held just seven seats.

And that’s because, after boundary changes, the state Liberals notionally hold just 20 lower house seats. Only six of those seats – Narracan, Benambra, Malvern, Rowville, Bulleen and Mornington – have a margin above 5 per cent. 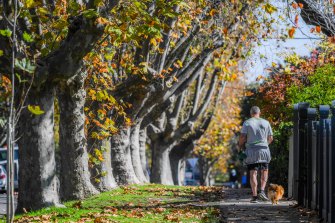 Malvern is one of only a handful of seats the Liberals hold with a margin above 5 per cent.Credit:Joe Armao

Assuming Victorians vote the same way in November as they did last weekend may be an imperfect science, but the Liberal Party cannot afford to ignore the warnings from voters last Saturday.

Guy, whose own electorate of Bulleen has a margin of 5.4 per cent, insists he will hold his seat which sits inside the boundary of the federal seat of Menzies where the Liberal Party’s primary vote dropped by more than 8 per cent.

The swing in Menzies could also impact Liberal frontbencher Ryan Smith whose seat of Warrandyte is on a notional margin of 4 per cent.

Moving south, a5 per cent swing against the Liberals in the federal seat of Deakin would spell trouble for former deputy Liberal leader David Hodgett in Croydon. 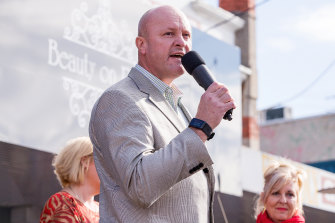 The member for Croydon, David Hodgett’s hold on the seat could be in trouble.Credit:Daniel Pockett

If replicated, a 7 per cent drop in the primary vote for the Liberals in nearby Chisholm would make it almost impossible for the party to win the state seats of Ashwood, Glen Waverley and Box Hill.

Then there are the well-heeled federal electorates of Kooyong, Goldstein and Higgins which, at a federal level, are now represented by Labor and independent MPs.

Similar swings away from the Liberal Party in November could see the party lose the state seats of Brighton, Caulfield, Kew and Malvern and make it almost impossible for the party to win back Hawthorn.

To make matters worse, federal Liberal MPs will meet in Canberra next week to elect a new leader, with conservative Queenslander Peter Dutton the favourite to take over.

While those who know him privately insist Dutton is a pragmatist and has a well-concealed softer side, moderate Liberals fear the party will lurch further to the right under his leadership and repel Victorian voters. As one Liberal candidate said, “he is poison down here”.

Labor agrees, with party insiders already frothing at the mouth with excitement at the chance to use photos of the hardline former defence minister as part of their advertising campaign.

But for all of Labor’s own spin, the party cannot interpret Anthony Albanese’s victory as an endorsement of Premier Daniel Andrews.

Across Victoria, the Labor Party suffered a 3.8 per cent hit to its two-party vote. The backlash was more brutal in working-class seats in outer-suburban electorates such as Scullin, Gorton and Calwell.

This has some Liberals, including former prime minister Tony Abbott and his Victorian disciple Tim Smith arguing that the Liberal Party’s base is no longer in the leafy streets of Camberwell but the working-class neighbourhoods of Broadmeadows.

Smith argues that perhaps the time has come for the Liberal Party to give up on the affluent inner-city suburbs of Melbourne and “focus on the true forgotten people in the middle and outer suburbs as well as rural and regional Australia”.

In other words, it’s no longer possible to be all things to all people.

While it’s true that the Liberals can no longer rely on Melbourne’s affluent suburbs to catapult them to victory, it would be electorally unwise for it to abandon seats where they still enjoy significant primary support, and in places where the party’s biggest donors still reside.

As one Liberal MP observed, under Daniel Andrews Labor has managed to appeal to voters in regional cities including Bendigo and Ballarat, among the so-called inner-city elites in Hawthorn as well as in more working-class suburbs in Melbourne’s outer fringe

And if the Liberal Party ever wants to be a party of government it will need to do the same.