This is where your train went: Aerial photos show Tube depots stacked with carriages as poll shows just a THIRD of the public support strikes

Aerial photos show Tube depots stacked with carriages in a damning demonstration of the effect of this week’s strikes – which only a third of the public support, according to a new poll.

The poll of 2,516 adults published suggested two-thirds (66%) of those aged 65 and above were against the action, compared to almost half (48%) of those aged 18 to 24 supporting the strikes.

And three in five (60%) also said they were opposed to suggestions of closing manned ticket offices at most railway stations.

It comes as train passengers are today suffering more disruption from the action as talks resume in a bid to resolve the bitter dispute over jobs, pay and conditions. 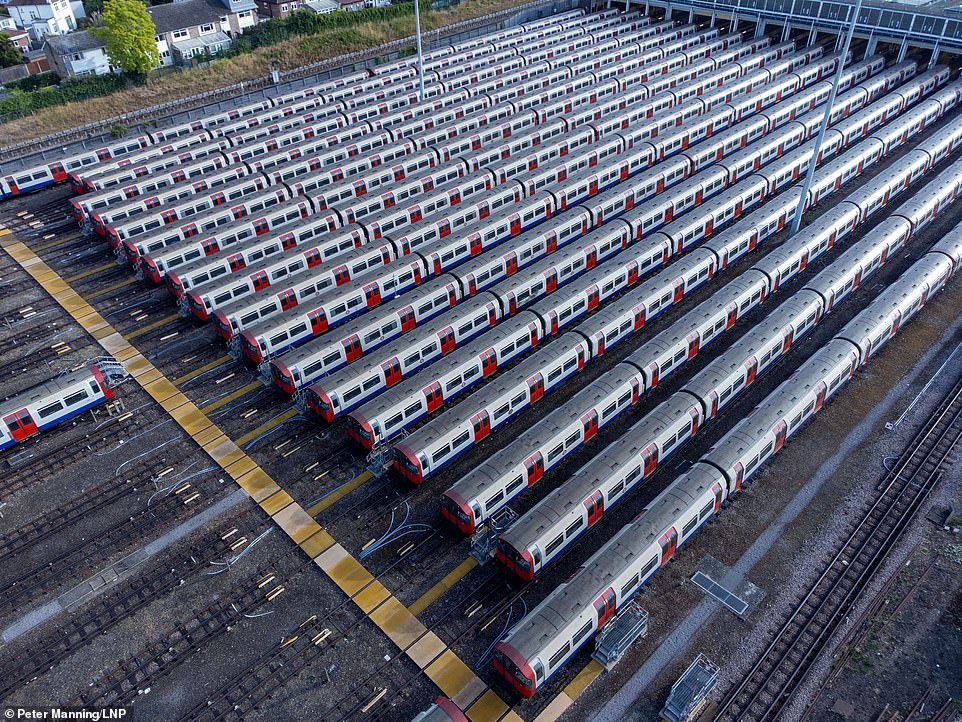 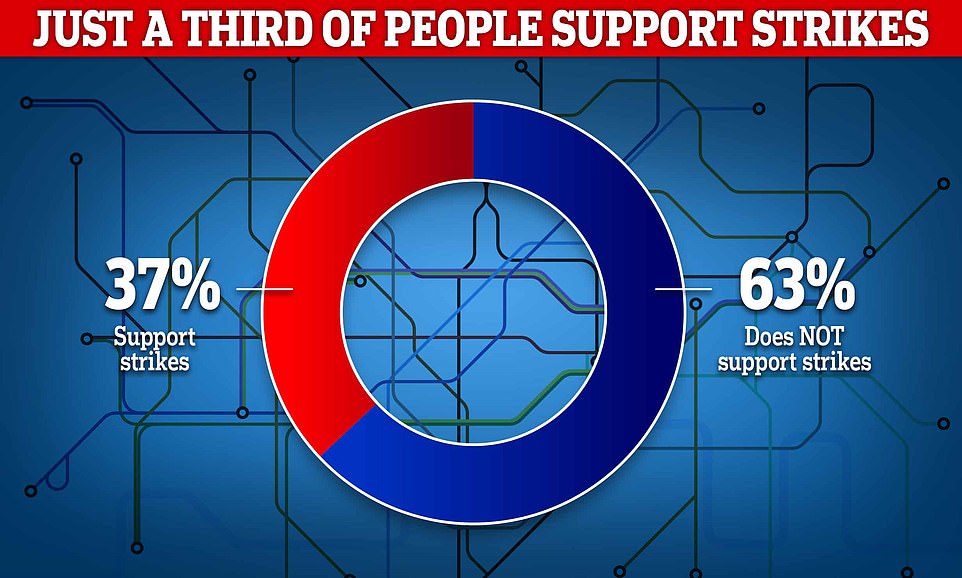 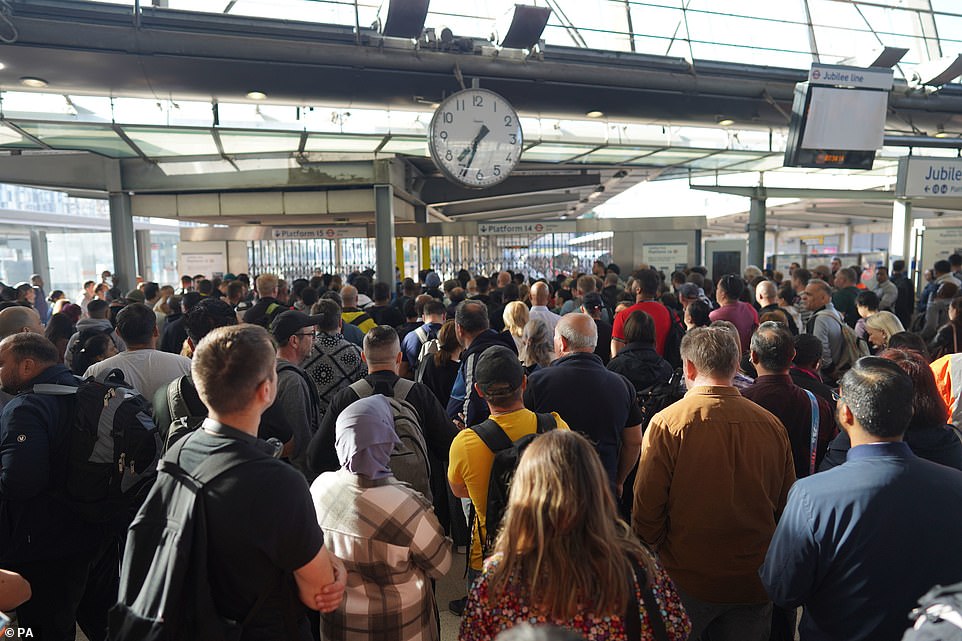 STRATFORD: Chaos as passengers wait for the station to open in London, as train services continue to be disrupted following the nationwide strike by members of the Rail, Maritime and Transport union along with London Underground workers in a bitter dispute over pay, jobs and conditions 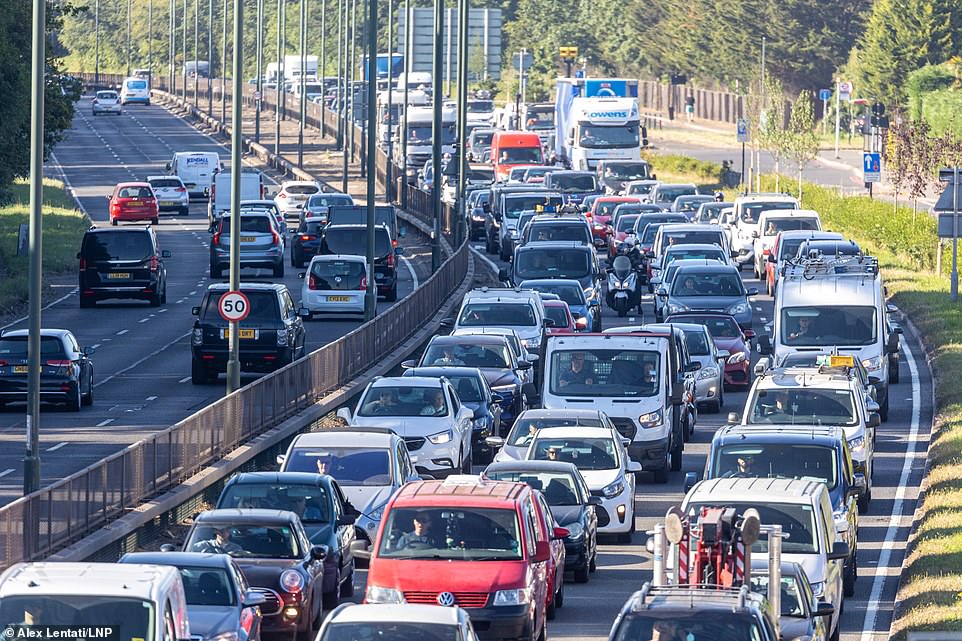 KINGSTON: The rammed A3 into London as commuters faced disruption and warm temperatures 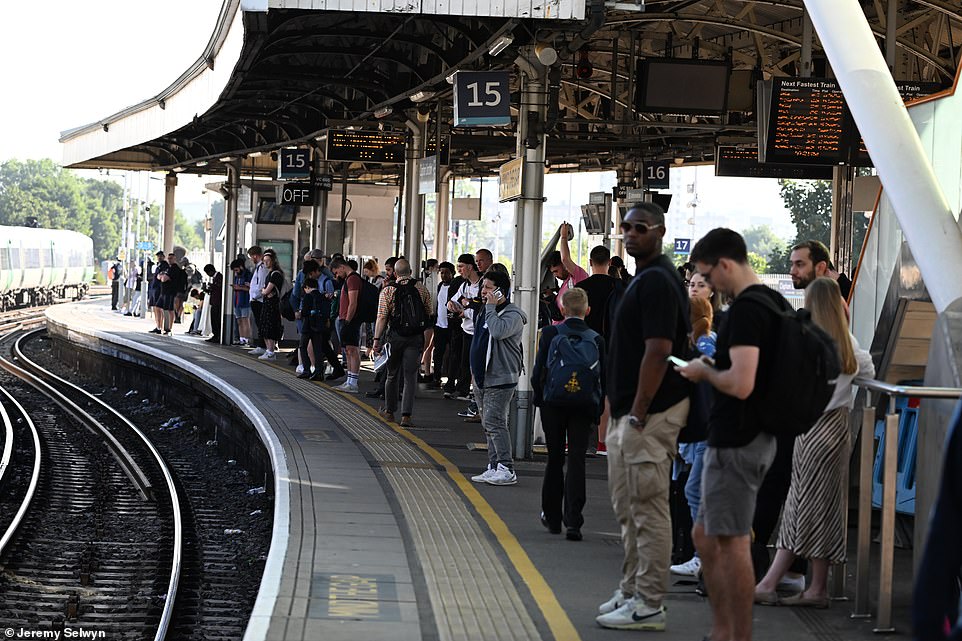 CLAPHAM JUNCTION: Busy platforms after the strike yesterday, with disruption to continue for six days

Services started later than normal this morning as trains were delayed leaving depots due to Network Rail (NR) signallers and control room staff who would usually have worked overnight shifts taking part in Tuesday’s strike.

Just 60% of trains will run across the day as a whole, and some operators will wind down services slightly earlier than normal tonight ahead of Thursday’s walkouts.

The third strike of the week is planned for Saturday.

Around 40,000 members of the Rail, Maritime and Transport (RMT) union at Network Rail and 13 train operators are involved in the industrial action.

The joint action caused travel chaos across Britain, with journeys taking longer and roads rammed with traffic as people switched to cars or buses to get to work.

The RMT will meet with NR and the train companies today in another attempt to break the deadlock.

RMT general secretary Mick Lynch said the turnout at picket lines on Tuesday was ‘fantastic’ and had exceeded expectations in the union’s campaign for job security, defending conditions and a decent pay rise.

He said: ‘Our members will continue the campaign and have shown outstanding unity in the pursuit of a settlement to this dispute.

‘RMT members are leading the way for all workers in this country who are sick and tired of having their pay and conditions slashed by a mixture of big business profits and Government policy.

‘Now is the time to stand up and fight for every single railway worker in this dispute that we will win.’

A Department for Transport spokesperson said: ‘These are desperately needed reforms that modernise the railway and put it on a sustainable footing for passengers and taxpayers.

‘Unions have shut down big parts of the rail network, hitting local businesses and unfairly cutting people off from hospitals, schools and work.

‘However, early data shows that unlike in the past, many people now have the opportunity to work from home, so we haven’t even a rush to the roads, as traffic has instead gone online, which means the unions aren’t having the overall impact they might have hoped.’

The union has been asked by Network Rail to attend formal consultation talks next month on introducing ‘modern working practices’.

He added: ‘We expect this will reduce roles by around 1,800, the vast majority of which will be lost through voluntary severance and natural wastage.’ 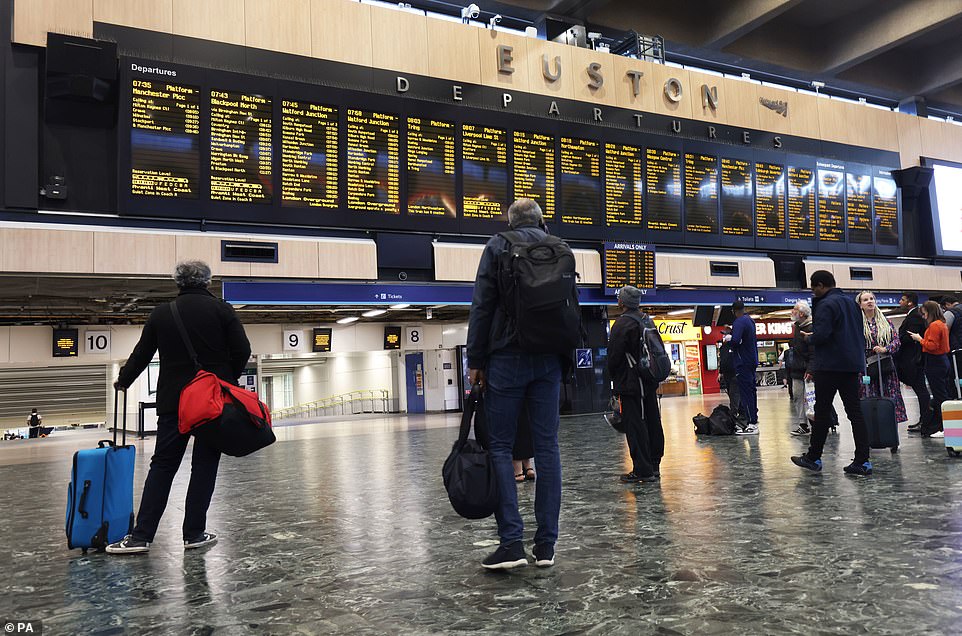 EUSTON: Passengers wait for the first trains at around 7am this morning as disruption from yesterday’s strikes continue today 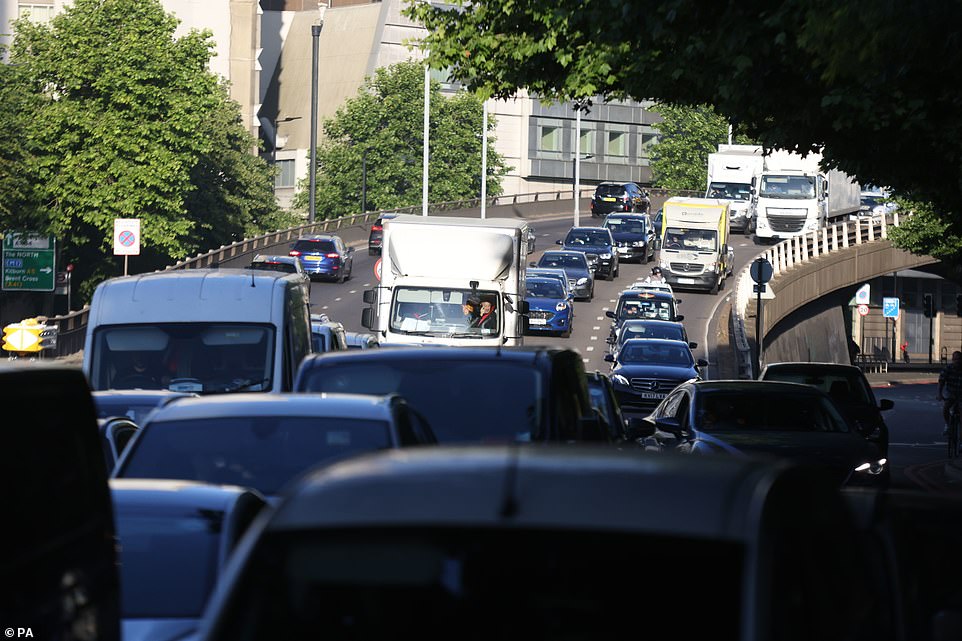 EDGWARE ROAD: Traffic remains heavy today after people were forced into their cars because of a lack of trains 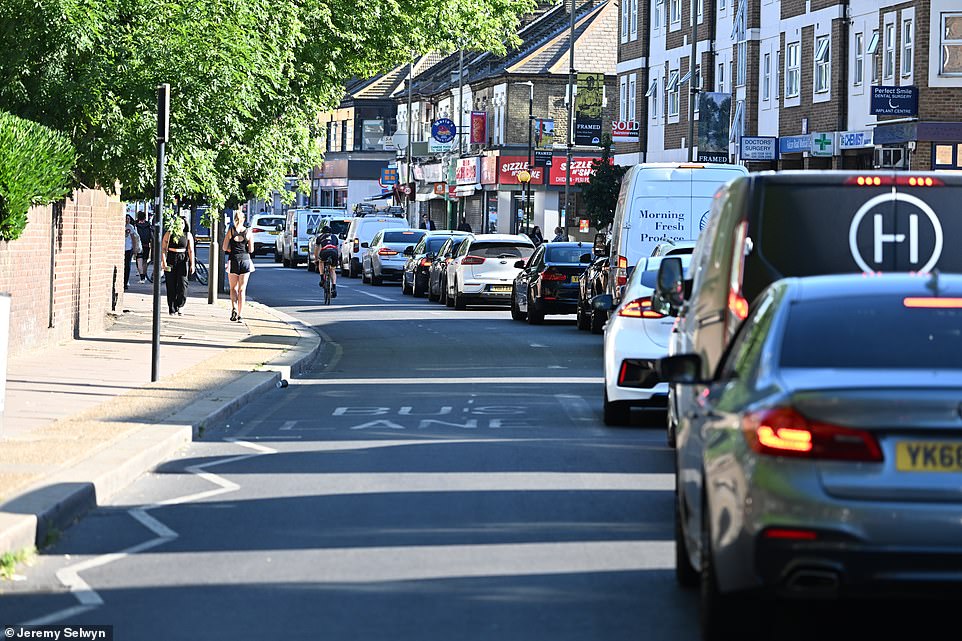 SOUTH LONDON: Long queues of traffic in the capital as people struggle to work or take their children to school this morning 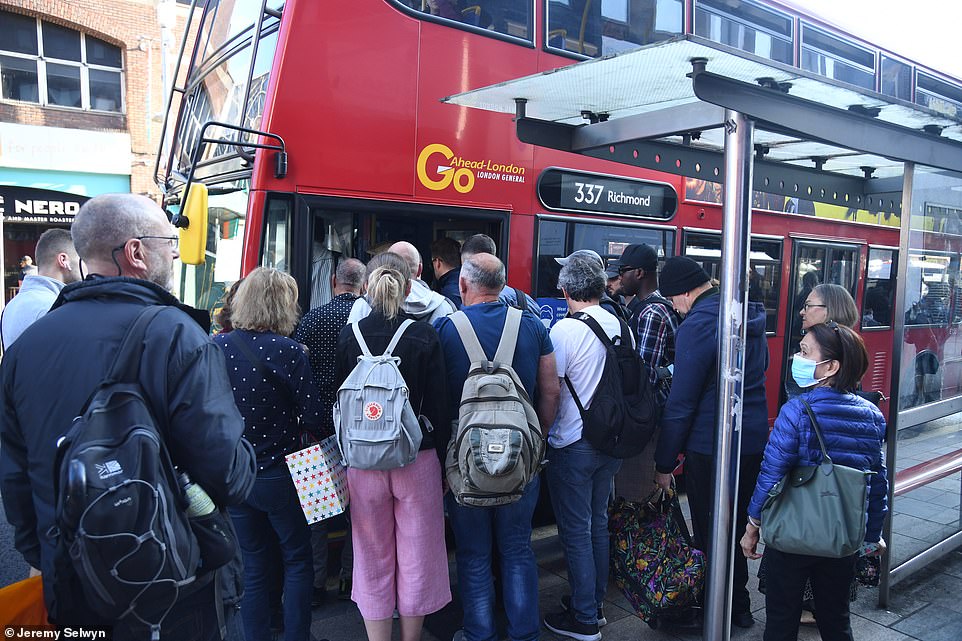 CLAPHAM JUNCTION: Commuters force themselves on to buses as they try to get to work in a strike week 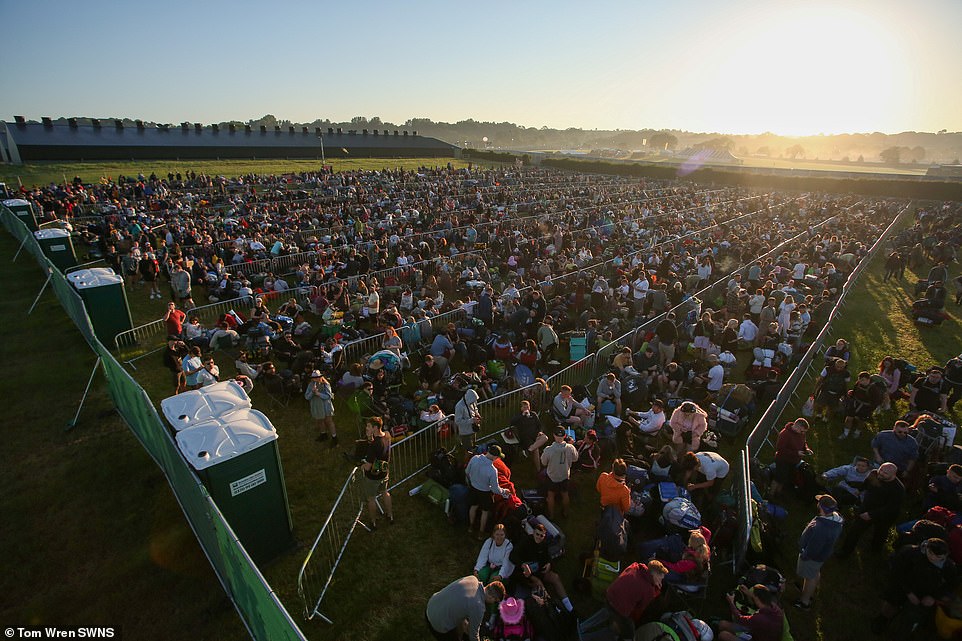 GLASTO: Festivalgoers arrive at Worthy Farm for the start of Glastonbury 2022 after their journeys were disrupted. Thousands have arrived early 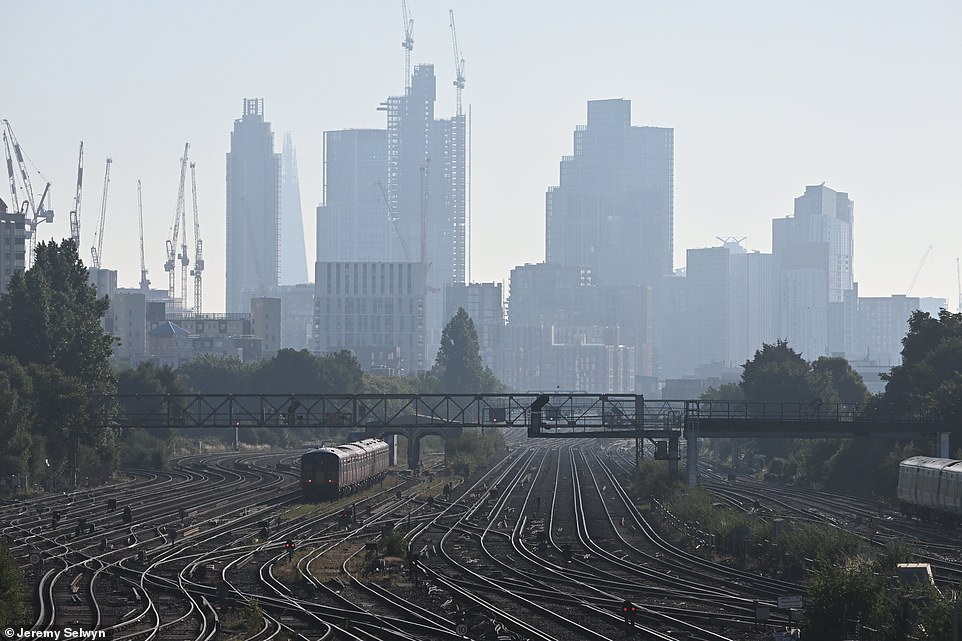 SOUTH LONDON: A sole train heads towards Waterloo on a day where commuters were warned that it would be ‘messy’ for them today

Deputy Prime Minister Dominic Raab said rising inflation figures show the need for pay restraint in the public sector and on the railways.

He told Sky News there is a risk of a ‘vicious cycle’ of rising wages pushing inflation even higher if union demands are met, adding that the Government is taking a ‘firm line’.

Most adults believe the rail strikes are justified, according to an opinion poll.

A survey of more than 2,300 people by Savanta ComRes showed that 58% said the industrial action is justified.

Three out of five of those polled said they are generally supportive of the principle of industrial action, while just 35% were generally opposed.

Prime Minister Boris Johnson put the public on notice for further strike action as Downing Street said it would ‘not give in’ to demands from the rail unions.

Mr Johnson warned commuters they must be ready to ‘stay the course’ and urged rail bosses and unions to agree on a modernisation package to safeguard the future of the industry.