Diane Abbott’s local Labour branch has been dragged into a new anti-Semitism row after saying it was a ‘scandal’ to describe the party as racist.

The Hackney North and Stoke Newington Constituency Labour Party (CLP) voted in favour of a measure on Thursday night blasting the idea that Jeremy Corbyn’s party was ‘institutionally anti-Semitic’.

It came the day after Mr Corbyn’s friend and ally Chris Williamson was suspended for saying Labour had been ‘too apologetic’ about anti-Jewish abuse claims, prompting uproar from MPs.

The motion was passed by 45 votes to 35, with 14 abstentions, with those opposed to it left in tears, the Jewish Chronicle reported. The motion by Ms Abbott’s local party was passed by 45 votes to 35, with 14 abstentions, with those opposed to it left in tears Derby North’s Chris Williamson was suspended from Labour on Wednesday as the party investigates his recent behaviour, following pressure from other MPs

It said the CLP ‘notes with increasing alarm the acceptance of the ‘fact’ that the Labour Party is ‘institutionally anti-Semitic’ by not only the media, but the right wing of the PLP (Parliamentary Labour Party).

‘It is distracting people’s attention away from the calamitous consequences of the Tory government’s continuing austerity and its disastrous handling of the Brexit issue as it nears the 29 March deadline.

‘It is a scandal that we are allowing ourselves to be branded as a racist party.’

Walthamstow MP Stella Creasy was among those who criticised the backing for the document. 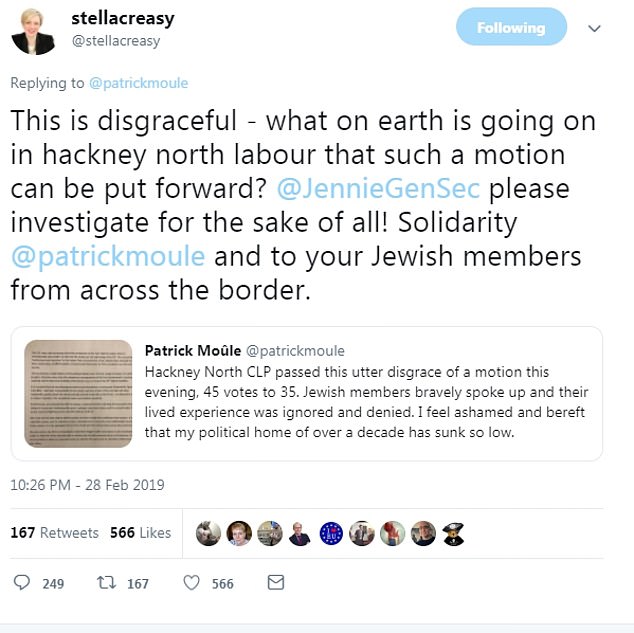 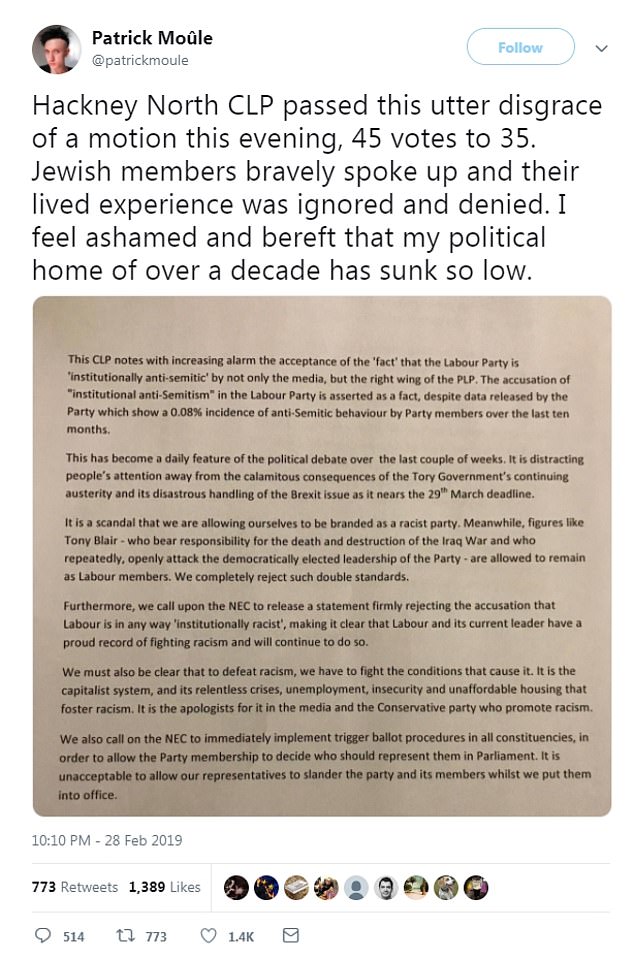 She said: ‘What on earth is going on in Hackney North Labour that such a motion can be put forward?’

Local Labour member Patrick Moule posted a picture of the motion on Twitter, saying: ‘Hackney North CLP passed this utter disgrace of a motion this evening, 45 votes to 35.

‘Jewish members bravely spoke up and their lived experience was ignored and denied.

‘I feel ashamed and bereft that my political home of over a decade has sunk so low.’