“Do we really need to say, ‘don’t hit golf balls into the Grand Canyon?’”

That’s what Grand Canyon National Park posted on social media one day after a social media influencer posted a video of herself golfing on the edge of the Grand Canyon’s South Rim, east of Mather Point.

In the video, which appeared on 20-year-old Katie Sigmond’s accounts on Oct. 26, Sigmond hit a golf ball and subsequently lost most of her club when the driver’s shaft flew into the canyon after the ball.

Social media users were quick to share Sigmond’s stunt on platforms such as the r/NationalPark subreddit, where a screen recording of Sigmond’s Snapchat Story garnered more than 900 comments. Commenters condemned Sigmond for littering as well as endangering people and wildlife below her. The influencer — who has a combined 10 million followers across TikTok and Instagram — was going viral for the wrong reasons and she appeared to delete the posts.

After receiving tips about the incident, Grand Canyon law enforcement identified and contacted Sigmond within a day of her posting the golfing video. The National Park Service intended to charge her with three misdemeanor offenses. 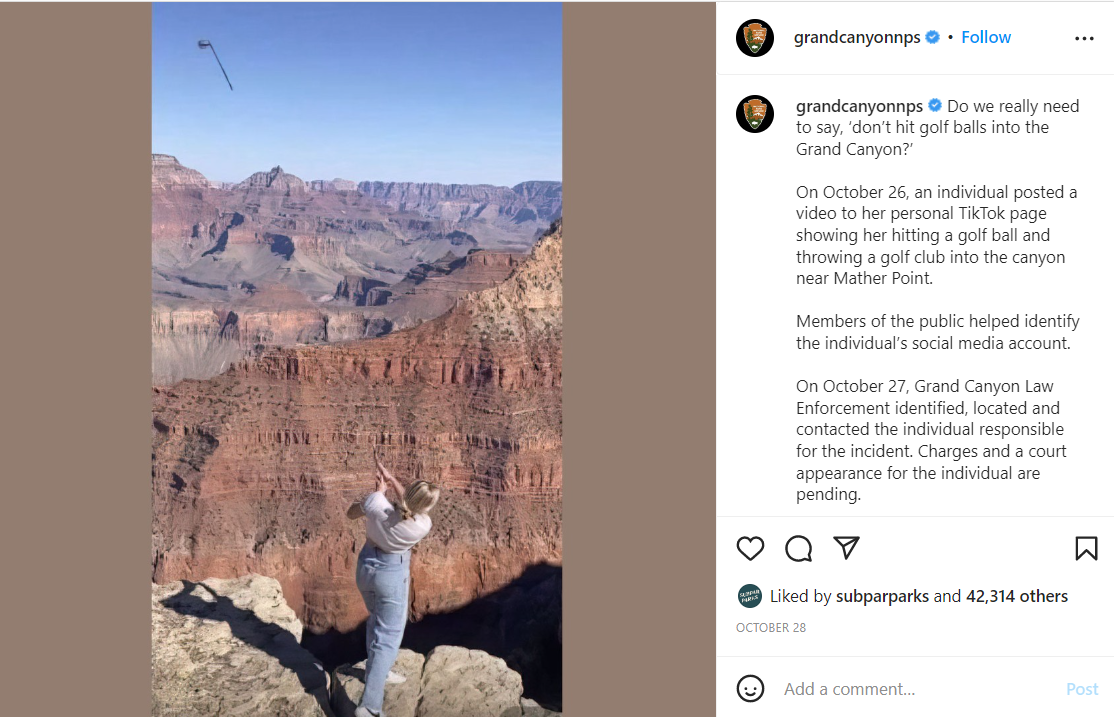 Sigmond received three federal violation notices — which are tickets issued by law enforcement departments for U.S. agencies such as the National Park Service and U.S. Forest Service — and was charged with three Class B misdemeanors as detailed under Title 36 in the Code of Federal Regulations.

The three charges were for tossing items into the Grand Canyon, littering and creating hazardous conditions with disorderly conduct. She was only cited for disorderly conduct and tossing or throwing items into the canyon, which carry a maximum fine of $5,000 and six months in prison, according to a copy of the written record of the collateral forfeiture agreement that the U.S. Attorney’s Office for the District of Arizona provided to The Arizona Republic.

Sigmond was ordered to pay a $285 fine, which includes $60 in processing fees. A spokesman for the Administrative Office of the U.S. Courts confirmed to The Republic that the Central Violations Bureau received two payments of $155 and $130 from Katie Sigmond on Nov. 15.

Though Sigmond initially faced an appearance at the U.S. District Court in Flagstaff, her case was resolved through a collateral forfeiture agreement with the U.S. Attorney’s Office in Arizona. In other words, she paid fines for the misdemeanor charges to the Texas-based Central Violations Bureau, which processes tickets and payments for “petty offenses committed on federal property,” according to its website.

This effectively closed Sigmond’s case with no convictions on her record. She did not respond to an emailed request for comment.

Information about the fines for various federal violations, such as spitting on U.S Department of Veterans Affairs property and possessing bald or golden eagles without a permit, can be found on the U.S. District Court for the District of Arizona’s website at https://www.azd.uscourts.gov/19-14.

Sigmond, who is based in Southern California, is known for posting videos of herself working out, traveling, dancing and golfing, as well as performing public stunts and pranks. But she’s far from the only person to pitch something into the Grand Canyon.

In October 2021, a visitor was pictured hitting baseballs from the Yavapai Geology Museum on the South Rim. After the National Park Service solicited tips to identify the person, he contacted NPS law enforcement to identify himself, according to Joëlle Baird, a spokesperson with the Grand Canyon National Park’s Public Affairs Office. 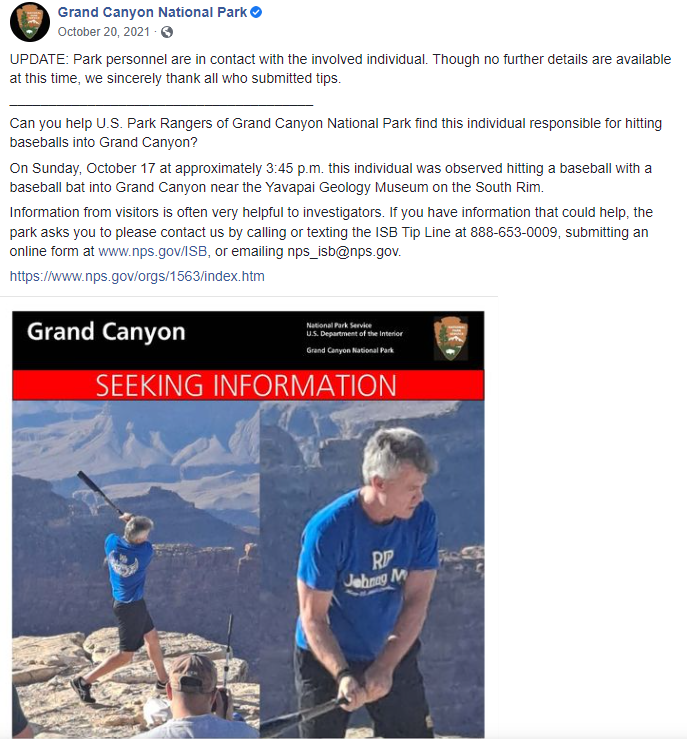 It’s not clear whether the man was cited for his actions.

Baird told The Republic that the NPS is aware that these kinds of stunts are occurring at the Grand Canyon and has received similar videos to Sigmond’s.

“It’s unfortunate that it happens,” she said.

Hit the trail:7 easy hikes at the Grand Canyon, plus 3 not-too-difficult ones that go below the rim

How to report vandalism in national parks

The NPS wants the public to know that launching items over the rim of Grand Canyon is not only illegal — it’s dangerous as the object could hit a hiker or animal when it falls or even start a landslide by dislodging rocks.

Damaging the landscape is a crime on federal land and is disrespectful because the Grand Canyon is the ancestral homeland of Native populations, including the Hualapai and Havasupai tribes. Today, the national park recognizes 11 tribes that are traditionally associated with the Grand Canyon.

People who want to send tips regarding public safety or aid investigations can contact the Investigative Services Branch by calling or texting the ISB’s tip line at 888-653-0009, submitting an online form at https://www.nps.gov/ISB or emailing [email protected]