Health and data experts are calling on the Victorian government to make its centralised coronavirus check-in system mandatory for all restricted businesses in a bid to improve the state’s contact tracing capabilities.

But business groups warn that while businesses would accept such a move, they would expect compensation for the costs incurred in setting up their own QR code check-in services during the early part of the coronavirus pandemic.

While NSW and the ACT have made it compulsory for restricted businesses to use a centralised government QR service which stores attendees’ details, Victorian businesses have the option of using private electronic record keeping systems or the Service Victoria QR app. 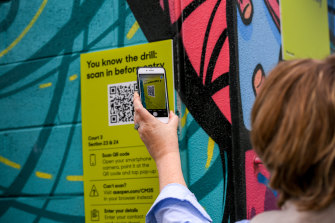 QR codes are the latest technology we’re being asked to rely on for the purposes of public safety.Credit:Eddie Jim

“It is much more convenient for people to use one app and it’s likely this would make data management for the government much easier,” he said.

“If we had an outbreak it would make things easier with the contact tracing.”

Council of Small Business Australia chief executive Peter Strong said if there were any costs to small businesses who are forced to migrate to a new system, they should be compensated, and he was “shocked” the Victorian government wasn’t managing the check-in system.

“I can’t believe how stupid it is,” Mr Strong said, “The government’s system is lot better, a lot safer. I was quite stunned, to be honest.“

Mr Strong pointed out that with some proprietary systems run by small businesses, information wasn’t immediately available to contact tracers after hours, which can cause delay in contacting people who had been at exposure sites.

“Having experienced the NSW and Canberra one, believe me, it’s so much better. I’m shocked they haven’t done it,” he said.

Restricted Victorian facilities including wedding venues, libraries, restaurants, pubs, bars, hairdressers and galleries must request and keep a record of the first name and phone number of all those who attend.

Anthony Macali, a data analyst and founder of the Covidlive website, said mandating one central QR code service was a “no brainer”.

“There’s definitely an issue with compliance in Victoria,” he said. “We are making it hard for Victorians because everyone is using a different app.”

He said the convenience of using one app, which stored your details, would drive up adherence with the rules.

“Considering what we have gone through, we should be the most compliant and the strictest when it comes to this,” he said. “We have been really slack here.”

The Victorian government recently released new software that will integrate private electronic record systems with the state’s contact tracing system, and businesses must roll this out before March 27.

In October, the ACT health department told The Age it had offered its QR code software to Victorian counterparts free-of-charge. At the time, Premier Daniel Andrews said Victoria would not use another state’s system because it was not tailored to sync with Victoria’s existing contact-tracing system.

“Everything that slows it down increases the risk of inadvertent noncompliance,” she said.

“A single system has a lot of advantages.”

Professor Bennett said while some businesses checked whether customers had signed in with QR codes, and had plenty of signage encouraging them to do so, others didn’t.

“I don’t think it is malicious,” she said. “But the biggest risk is that we are losing information.”

She said the government had been reluctant to impose a centralised system because businesses had invested in their own systems prior to the roll out of the free Services Victoria QR code at the end of November. Some of these services also allow customers to order food from their tables. 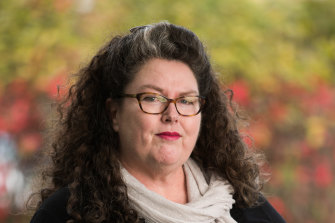 La Trobe University epidemiologist Hassan Vally said one centralised system would provide useful data on how many Victorians were checking in with QR codes.

“Some cafes have a fantastic system and all your details are there and you press one button and can confirm it is you,” he said. “Then there are others where you have to spend a few minutes retyping in all your details like your name, phone numbers and whether you are there with someone else. It is frustrating.”

Victorian Chamber of Commerce and Industry chief Paul Guerra said businesses would accept a future transition to a single, government-run system but that they be compensated for the additional resourcing and expense that would be incurred.

“[We] acknowledge that using such a wide variety of systems and codes can be frustrating and inconvenient for customers, but we have to balance that with the time and money that businesses have invested,” Mr Guerra said.

A Department of Health spokeswoman said many businesses had invested in private electronic record keeping systems, which were also used for ordering, that didn’t connect seamlessly to the government’s system.

“To ensure they are not losing money on this investment, the government has developed the Victorian Government Visitation API – a piece of software that enables private QR codes to communicate directly with contact tracers,” she said.

“From 27 March, all businesses using electronic record keeping – such as a QR code system – must use a system that seamlessly integrates with the Victorian Government contact tracing system to help contact tracers respond to outbreaks even faster.”

Toby Chu, the manager of the Little Man Cafe in Seddon switched to the Service Victoria QR service last week because it was going to be easier than using the government’s bridging software. He said customers at his cafe rarely needed encouragement to check in and were incredibly compliant with the rules.

“Everyone is used to it because it is widely available,” he said.

“When it comes to regulations and laws I don’t want to take any risks.”

Zowie Minchin, who opened Zsa’s Bar Bistro Deli in Northcote just before Victoria went into the second lockdown, said she liked being able to tailor her check-in form because she could use her own company identity rather than a robotic check-in, “with the option for people to sign up to our database.”

But she acknowledged many elderly or less technologically literate customers would appreciate not having to navigate a fresh interface each time they sat down to eat.

There are currently 44,872 registered accounts using the Victorian government QR Code Service and more than 10 million check-ins have used the code since it was launched.