How did he survive? Cars swerve to miss excitable dog after he leaps out of a car travelling at 80km an hour in a busy tunnel

A dog has escaped a near death experience after jumping out of a car in a busy tunnel.

The dog leaped from an open window of a car travelling 80km/hr in Melbourne’s busy Eastlink Tunnel on Sunday.

Footage from 7 News shows the pooch sliding metres down the centre of the three-lane road.

The dazed animal pushes itself back to its feet when an oncoming silver car swerves to avoid hitting it.

A car in the left lane comes to a sudden halt as the dog stumbles in front of it, still trying to get its bearings.

Cars in the two left lanes come to a standstill as the chaos unfolds, while traffic in the far right lane slows to a crawl.

The owner of the dog stops their car metres from the disastrous scene, before they run out of the car to retrieve their pet.

They can be seen cradling the frightened animal before rushing back into the car. 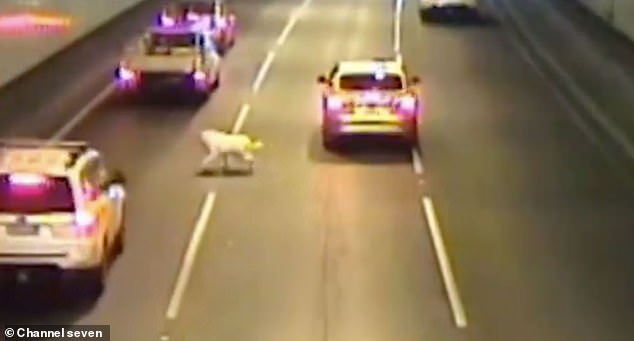