Three-in-four Britons say they are worried about climate change and its implications for them and their families, new data reveals today.

The Office for National Statistics found that 75 per cent of the public are concerned about environmental damage, including almost a third who say they are ‘very worried’.

Additionally, more than four-in 10 (43 per cent) told its Opinions and Lifestyle Survey the state of the planet was making them ‘anxious’.

The numbers were released today as the UK hosts the UN’s Cop26 summit in Glasgow.

They showed that concern about the climate change is higher among the young middle aged, those between 35 and 49, than it is among younger groups – though those aged 25-34 are more likely to be very worried.

And men are less likely to be worrying about the state of the planet than women. Just a fifth (19 per cent) of those polled said they were not worried about climate change. 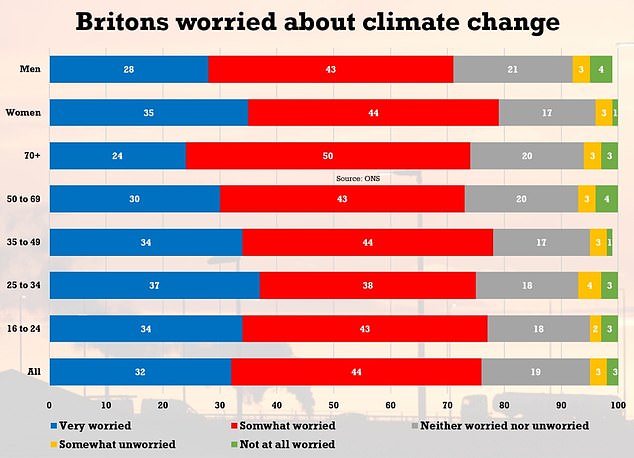 The Office for National Statistics found that 75 per cent of the public are concerned about the environment, including almost a third who say they are ‘very worried’. 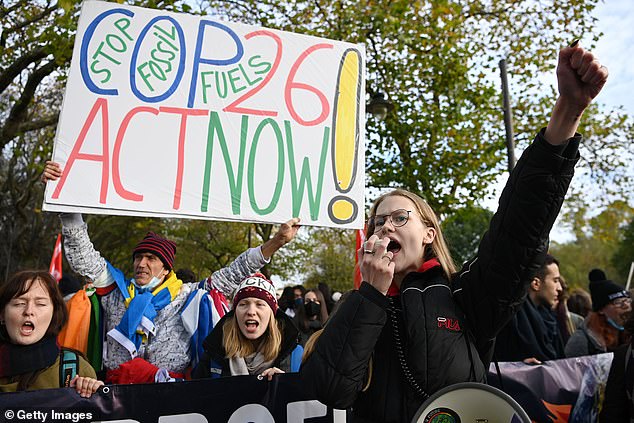 The numbers were released today as the UK hosts the UN’s Cop26 summit in Glasgow.

The report noted: ‘Adults who reported being worried about the impact of climate change were three times more likely to have made a lot of changes to their lifestyle in response to the issue than those who were relatively unworried.’

Overall, 81 per cent of adults told the ONS they had made some or a lot of lifestyle changes to help tackle climate change, with just 19 per cent having made none.

Youth activists are taking to the streets of Glasgow today to demand action on climate change from leaders and politicians as the Cop26 talks continue.

Campaigner Greta Thunberg, fellow activist Vanessa Nakate and other young campaigners, as well as local trade unionists, will speak to crowds at the end of the march through the city where the UN summit is being held.

The climate strike organised by Fridays for Future Scotland, with participants marching from Kelvingrove Park to George Square, comes as the Cop26 talks feature events highlighting the voice of young people and education in climate action.

Ms Thunberg has been highly critical of the two-week conference, claiming it is the most ‘excluding Cop ever’ and labelling it a ‘two-week celebration of business as usual and blah blah blah’.