Two suspects have been arrested and charged in connection to the fatal shooting of an off-duty New Orleans police officer last week.

Frederick D. Jackson, 19, and Anthony Rayshard Jenkins, 21, were arrested this week and charged with capital murder and attempted capital murder after the Aug. 21 daylight shooting of NOPD Detective Everett Briscoe, 41, who was later pronounced dead at a nearby hospital, and Dyrin Riculfy, 43, who remains hospitalized in critical condition, police said on Friday.

The two victims were dining on an outdoor patio in Houston when Jackson and Jenkins attempted to rob them, at which point one or more suspects fired and shot both Briscoe and Riculfy, according to police. The suspects were out on bond when they committed the crime, as FOX 26 Houston first reported.

A funeral for the 13-year NOPD veteran, husband and father to two sons, Nicholas and Christopher, was held Saturday, a week after his death.

“A proud graduate of John McDonogh Senior High School Class of 1998 he furthered his education at Southern University Baton Rouge and Southern University of New Orleans. Everett was also a dedicated member of the Zulu Social Aid and Pleasure Club,” Briscoe’s obituary reads.

Harris County District Attorney Kim Ogg described Briscoe as “beloved” and said the city of Houston is “shaken at how this could happen on a weekend afternoon at a restaurant in the heart of [a] tourist area.” 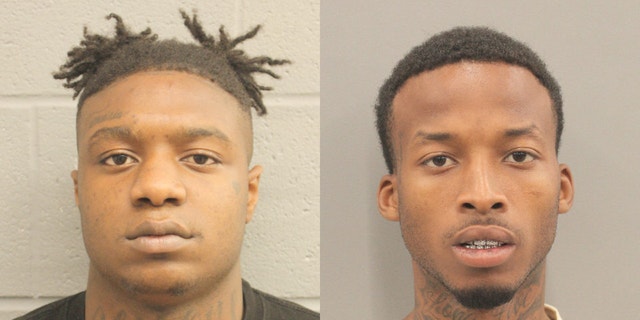 “We’re going to seek justice for both victims and their loved ones as our prosecutors work tirelessly first to obtain no bond on each of the offenders. It should surprise no one at this point in Harris County, Texas, that the two suspects were already out on bond — one on multiple bonds,” she said.

A capital murder charge in Texas only has two consequences: the death penalty or life without parole, Ogg explained. A senior committee of prosecutors will be going over evidence in the case to determine penalties for the suspects. There is also a third suspect, but police had not released any information about that person at the time of publication.

The NOPD said in a Friday tweet that it is “thankful for the quick arrests” made by the Houston PD in Briscoe’s killing.

“As a man who dedicated his life to justice, Everett Briscoe will hopefully rest easier knowing individuals involved in his death will face theirs,” the department tweeted.