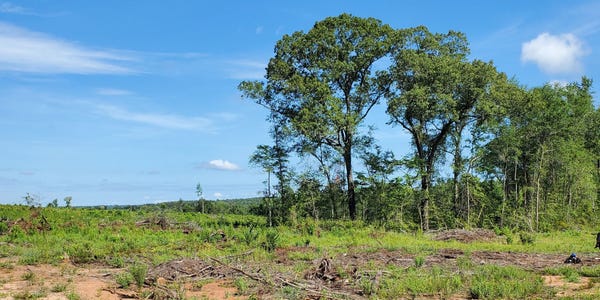 In less than a month, two women turned a viral news story about a small Georgia town for sale into the foundation for a new Black-centric community with the idea of freedom at its core.

Ashley Scott, a realtor from Stonecrest, Georgia, told Insider that events that rattled the US this year — George Floyd's death in police custody in late May and the spread of the novel coronavirus pandemic — had left her feeling "distraught" and "looking for ways and opportunities to make a change and to feel more empowered."

"I had recently started going to a therapist at the time and we were actively trying to figure out a way, in the midst of protest and a pandemic, of how we could be the change we wanted to see," Scott said.

In June, Scott's friend Renee Walters spotted a news story advertising the 700-person town of Toomsboro, Georgia, for sale. Reports of the town being for sale have repeatedly popped up over the past several years and Toomsboro Mayor Joyce Denson clarified to local outlets that the town itself wasn't for sale, but nearby land was.

As Scott described it, the pair saw the sale as an opportunity at a listing price of $1.7 million, for "the same amount for a small apartment in New York, you could own a whole city." The two pitched some friends and family members for a collective purchase, and the Freedom Georgia Initiative was born after 19 Black families successfully purchased the 96.71 acres of rural land.

Scott wrote in an op-ed for Blavity in August about how the group saw the land as a chance to "start fresh" with "a city that could be a shining example of being the change you want to see" by supporting Black families and companies.

"We wanted to be more involved in creating the lives we really want for our Black families," Scott wrote. "And maybe, just maybe, create some generational wealth for ourselves by investing in the land. Investing in creating a community that is built around our core values and beliefs."

A new community built from the ground up

The initiative is geared toward offering a fresh opportunity for a Black-centric community to thrive after the ruin of Tulsa's "Black Wall Street" by white supremacists and the poverty reinforced by Jim Crow laws that have since stifled the abilities of Black Americans to create wealth.

In addition to protests against police brutality and racism in America, advocates have also spoken out in recent months about the need for Black Americans to overcome the wealth gap that can be traced back to slavery.

Ohio State University researchers Derrick Hamilton and Trevor Logan wrote in February 2019 that "there has been virtually no progress in the last 50 years" with regard to Black Americans' abilities to build wealth, as pathways including education and housing assistance have been historically racist in practice.

"While there is no magic bullet for racism, access to wealth, and the security to pass it down from one generation to the next, would go a long way toward changing the economic trajectory for Blacks," Hamilton and Logan wrote in The Conversation.

Scott told Insider that the initiative is focused on building the community from the ground up with the help of Black-owned businesses, like banks and contractors, but the area will be open to everyone eventually.

"It's not even about being just a 'Black thing,'" Scott said. "It's about having a place where we can all be proud and have human dignity, honor, respect, and equity amongst our Black people because we have Black talent."

Walters told Insider that despite major figures calling for change and speaking out in support of Black Americans in recent months, the two hope the project can be an example to those that advocating for significant change can begin on an individual level.

"One of our core goals to show that it can be done," Walters. "You don't have to wait on the politicians and the rappers and everybody to help us. We have to help ourselves."

Since acquiring the land, the initiative has held events to start providing a community feel in the area, including the "Big Black Campout" to celebrate Labor Day and an official ribbon-cutting to kick off the beginning of development.

Over the next three to five years, the team said they hope to develop the land, installing Wi-Fi and water before planning residential, retail, and recreation areas. The group said in a press release that its members are "prioritizing black-owned, women-owned, and veteran-owned contractors and vendors to complete development."

Despite the initial excitement of the community's first events and milestones, Scott said the area, and inspiring change, remains a long-term project.

"It is a long game, nothing is changed overnight," Scott said.

There are 614 billionaires in the United States, and only 7 of them are Black