See you later! 12-foot ‘MONSTER’ alligator stalking Houston suburb so huge it had to be snapped up by a tow truck

An enormous alligator believed to be over 12-foot long had to be removed with a tow truck after the naughty animal snuck into a residential area.

The reptile was spotted in the street in Atascocita, Texas, in the early hours of September 19.

Once at the scene, officers from Harris County Constable Precinct 4 found the 12-foot gator occupying the middle of the road, and have since gone viral on Facebook as users were left stunned at the sheer size of the alligator. 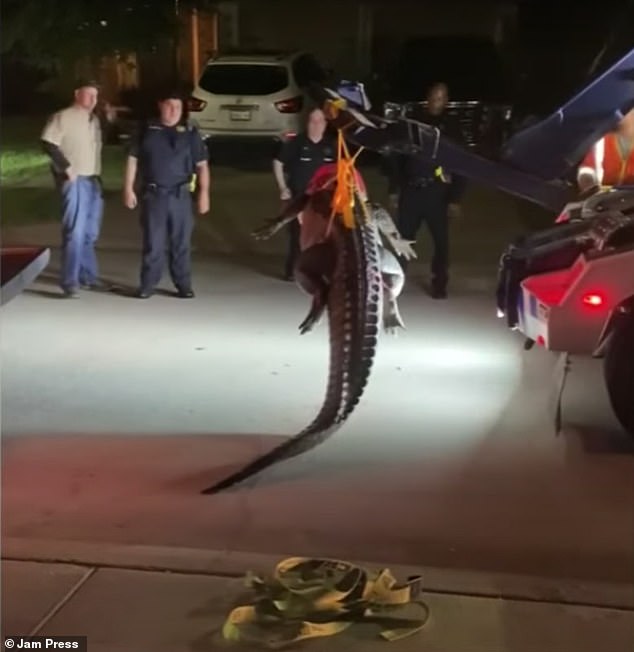 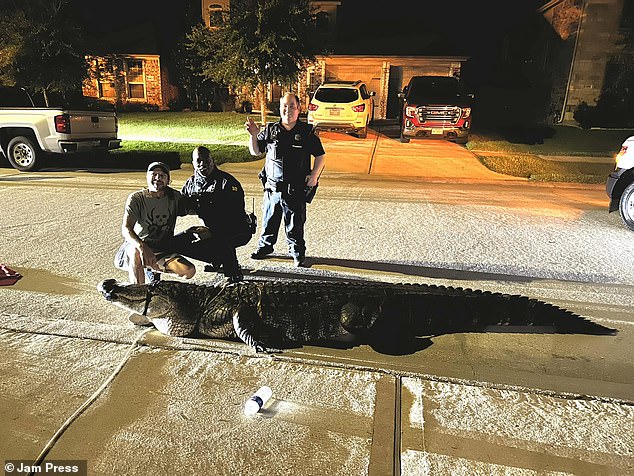 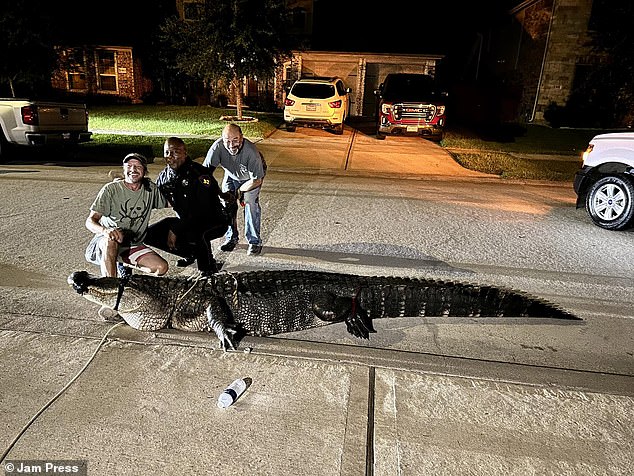 An expert trapper was able to corner the beast and secure its deadly jaws, but a tow truck had to be called in to lift the creature and take it away

An expert trapper was called with a pick-up truck and was able to restrain the gator.

However, it was just too big to move without further help, with police forced to call a tow truck company to lift the beast onto the back of the vehicle.

‘See you later, alligator!,’ Constable Mark Herman wrote, with his Facebook post racking up over 1,300 likes and hundreds of comments.

‘This morning, deputies with Constable Mark Herman’s Office responded to the 13800 block of N Lake Branch Lane in the Waters Edge subdivision in Atascocita in reference to a 12-foot alligator in the middle of the road.

‘The alligator has been safely captured and in Animal Control’s possession.’

Users have been left shocked by the humongous reptile, with many comparing it to a ‘dinosaur’.

One person commented: ‘So, we just have dinosaurs roaming neighborhoods now?’

‘That’s a hefty one!’ wrote someone else.

After the latest sighting, one Facebook user joked: ‘He needs to go to Gator Country!’

‘This alligator is actually 12ft 4in. I was there when they measured it,’ added someone else.

‘OMG. I don’t know what I would do if I came upon a gator in the road,’ wrote another user. [sic]

‘Yeah I ran into him on a kayak in the water. Never again lol,’ added someone else.

Eyewitness Michael Schwab said the animal looked like a dinosaur and was a real ‘sight to see’.

He added: ‘He was thrashing around. He looked tired, but it was beginning stages of them removing him, and it was probably one of the craziest things I’ve seen animal wise.’

According to Texas Parks and Wildlife, despite several recent sightings of alligators in urban areas, officials have not noticed a boom in their population.

Local experts said alligators are more active in spring and summer due to the heat.

Similarly, when there is a drought in the area, such as earlier this summer, gators go in search of water.

Last week, an 11-foot alligator was captured in Katy, Texas. 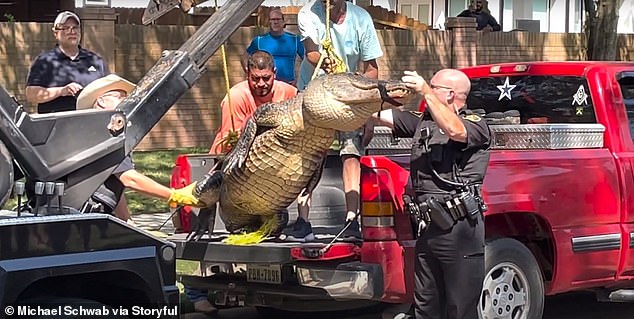 Once it was tied up, police used a tow truck to hoist the gator up safely which made the process easier as the alligator weighed almost a quarter-ton

Authorities quickly responded after getting calls from concerned residents, and a licensed trapper straddled the beast to tie it up

Authorities found the reptile prowling through the grass near Buffalo Bayou and subsequently caught it and tied it up before transporting it.

The gargantuan reptile was then taken to Gator Country, a reptile sanctuary that houses ‘nuisance gators,’ or gators that have been found and captured in residential neighborhoods.

The sanctuary has over 450 reptiles, and says they are ‘the only sanctuary for nuisance alligators to reside in Texas,’ according to its website. 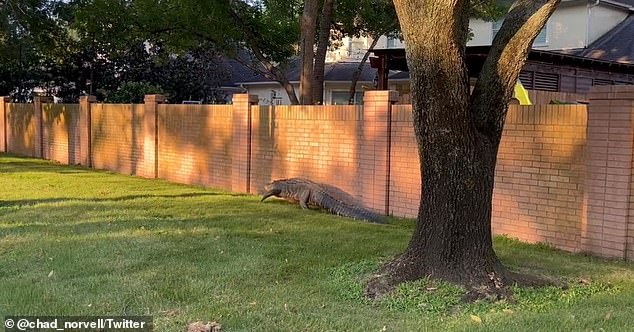 The gigantic alligator was first seen strolling in a residential neighborhood in Katy, Texas on the morning of September 12

The astounding videos come only days after another massive 11-foot gator was spotted tied to the back of a car on a Florida highway.

This particular animal appeared to have been hunted as part of Florida’s annual alligator hunting season, which allows permitted hunters to harvest the gators. 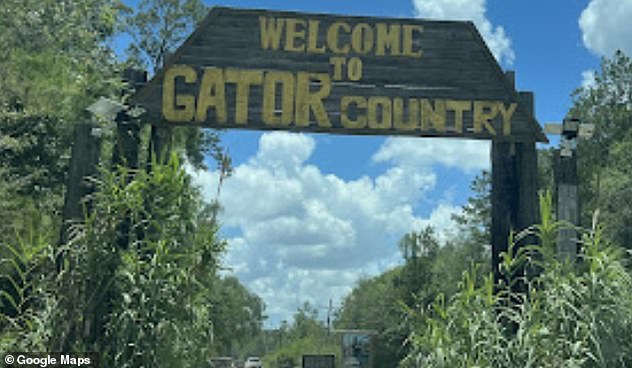 The enormous reptile was safely taken to Gator Country, a reptile sanctuary and adventure park in Texas that welcomes alligators handed over after disturbances 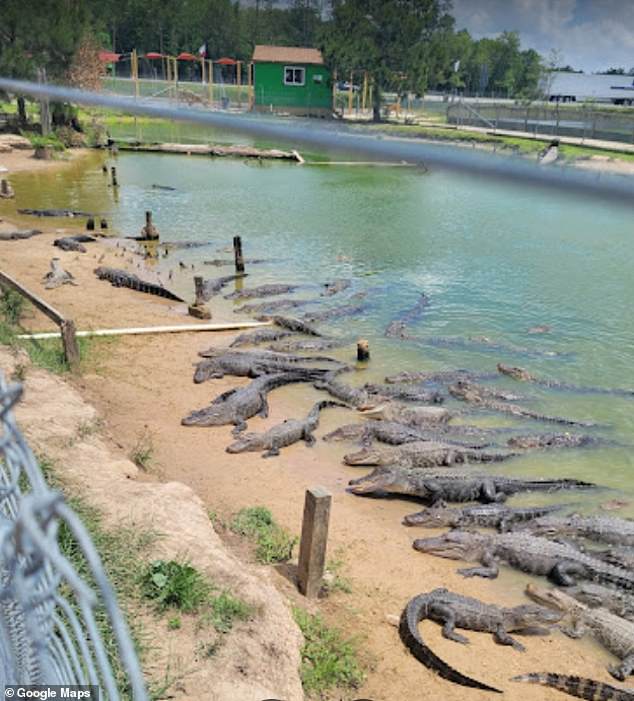 Gator Country is home to over 450 reptiles and hosts educational shows and also daring feeding shows, where large alligators are fed food in front of a crowd

About 5,000 people apply for just 7,000 permits each year with the gators harvested ranging from nearly three feet to nearly 14 feet in length.

Wildlife experts estimate that 1.3 million alligators of every size live in Florida, while Texas is estimated to have only 400,000 thousand.

Fatal alligator attacks are rare in the United States, typically occurring about once a year. 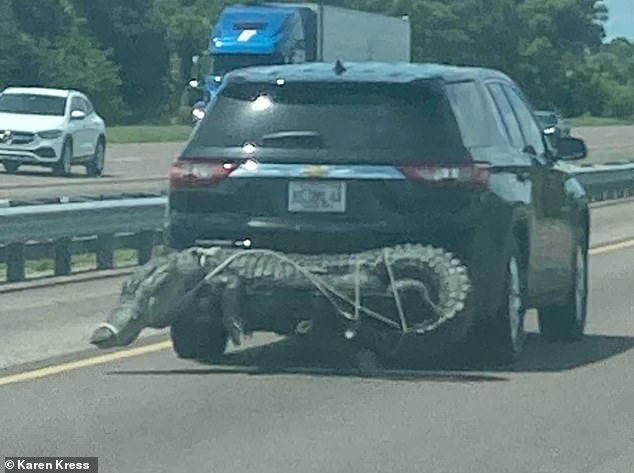 A bizarre image posted to social media appears to show an alligator strapped to the tailgate of an SUV in Brevard County, Florida last week