The Season 1 (series?) finale of Y: The Last Man hit FX on Hulu Monday, and despite the major twists and turns it took, it’s all a bit bittersweet, isn’t it? On Oct. 17, news broke that the series would no longer continue at its current streamer, but that showrunner/executive producer Eliza Clark wasn’t giving up just yet. “We are committed to finding Y its next home,” she wrote at the time. (More details on that here.)

Ahead of the finale, Yorick was still on the lam with Agent 355 and Dr. Mann, temporarily hiding out in Marrisville before continuing their journey to San Francisco. Hero was still following a mad cult leader around blindly, while Jennifer remained in captivity with Beth following the murder of Regina Oliver. But if this is, indeed, the last episode for the Last Man, did we get any satisfying answers or conclusions? Read on for a full recap of “Victoria.”

The episode is sprinkled with scenes from a pre-event Brown family dinner, and it’s clear the dynamics of this foursome are awkward. Hero drinks far too much and takes shots at Yorick; in return, he outs her for dating a married man and takes jabs her alcoholism. The family is a hot mess, the personification of oil meeting water. Hero, unashamed by her life choices, wonders why she has to keep secrets when her dad is banging his TA and no one seems to care. All this drama leads to Jennifer’s cutting the meal short. Yorick and Beth also make a fast exit just as Sam arrives to the scene. “I made a mess,” she tells him, as he hugs her tight.

Back in the post-event world…

YORICK, DR. MANN AND 355 | Despite the fact that Yorick likes their current hideout, Agent 355 is antsy to hit the road, fearing for Y’s safety and the mission at hand. Though Dr. Mann worries she might not be able to help the situation, 355 assures her that they have to at least try.

Meanwhile, Sonia confesses to Yorick that she killed someone (hence, her time in prison), saying that time isn’t as linear as one perceives. The good and the bad is all mixed together, she says, but before she can get too far in her spiritual monologue, Yorick interrupts by kissing her. And yes, they hit the sheets and wake up next to each other. (Soooo, Beth who, now?)

When 355 wakes up, she finds another tracker on the window sill. It’s the same one she destroyed in the woods a few episodes back to prevent her Culper Ring crew from finding their location. Shortly after, she hears gunshots outside (which we’ll find out is the beginning of a conflict with the Amazon cult). The agent creates a distraction so Yorick and Dr. Mann can escape into the woods, but Hero goes after them on horseback, not knowing whom, exactly, she’s chasing down. 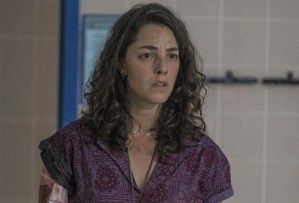 HERO, NORA AND THE CULT | Rewinding to a bit before the gunfire began, we see the Daughters of the Amazon continuing their search for Marrisville, and they’re ready to fight to take what’s rightfully (not at all, in fact) theirs. While lounging by an indoor pool, two armed women storm in to try to scare the Daughters of the Amazon away. They say the president has been murdered and the government no longer exists. Of course, they’re referring to Regina Oliver, but Hero naturally (and unfortunately) believes her mother was the one killed in cold blood.

When the Amazons descend into town, they go in guns blazing. After Roxanne demands they surrender the man they’re hiding, an older woman says Roxy has “no idea who you’re dealing with.” And this, my friends, is when the finale turns into a shoot-’em-up Western film.

JENNIFER AND THE PENTAGON | Beth demands to know where Yorick is, but Jennifer says she has doesn’t know. Beth tells Jennifer to shave her head, but Jenny ain’t so down with that cosmetic suggestion. Beth says the world has changed since Jennifer locked herself away in her fortress, and that if she wants to survive this hellhole, they need to leave the Pentagon ASAP.

Later, a stranger lurks in the dark, and after Beth tases him, they discover it’s Sam. (How he both found Jennifer and got inside the compound is beyond me.) Before they can make their great escape, they’re surrounded by mysterious figures shining blinding flashlights in their eyes. 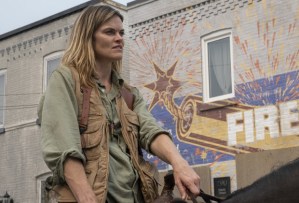 WORLDS (FINALLY) COLLIDE | As Hero chases down Yorick, Sonia and Mann, Sonia fires off a shot that pops Hero in the shoulder and knocks her off her horse. Yorick turns around, sees who it is and rushes to save Hero from the rest of Sonia’s bullets. They embrace, with Hero obviously being confused at Yorick’s mere existence. She tells him their mom has been killed and warns that the Amazons are looking for him. But before they can catch up over bagels and coffee, Sonia is shot in the head. Another Amazon arrives on horse, but Hero shoots her dead so Yorick can flee.

Back at the shootout, Roxanne runs out of ammo, and just as 355 is about to sink a well-deserved bullet in her ass, Nora prevents it by calling a ceasefire. She surrenders the battle, causing Roxanne to retreat in anger. After Nora takes out her own aggression by destroying a bathroom, Hero enters to confide that Yorick is still alive.

Nora then snaps. She calls out Roxanne in front of the whole group for her “suicide mission,” which had no exit plan or strategy whatsoever. She then compares Roxanne to the men who used to be in their lives. Roxanne demands Nora be escorted out, but then Nora does something Roxanne never sees coming: She shoots the cult leader dead, and her lifeless body sinks to the bottom of the pool. The rest of the women pull their guns on Nora, but she continues: “We don’t serve Roxanne, we don’t belong to anyone. This world will learn to fear us because we’ll show theme exactly who we are.” Hero walks forward to stand next to and support Nora.

Agent 355 catches up with Mann and Yorick, who is grieving both his mother and brainwashed sister. She tells him he’s free to go if he wants. Since she takes orders from the president and the president is dead, he can give this whole thing up and go live his life. He’s still in, but he doesn’t want to be a helpless liability anymore. He asks her to teach him how to fight and survive.

At the very end, we learn the Culper Ring has Jennifer, Sam and Beth in a holding cell, and they’ve left medical supplies, a car with a full tank, and a map and coordinates for 355 to find. They want Yorick, Mann and the agent to come in. “They’re like, your family, right?” Mann asks. The agent doesn’t respond, as she drives them down a long dirt road.

That’s all she wrote for Y: The Last Man, at least for now. Thoughts on the finale? Vote in our polls, then drop some comments below.