Duuuun dun. Duuuun dun. Two of the most iconic notes in cinema history – we all know what they mean.

Of course, it’s the iconic song from 1975 shark thriller Jaws, and John Williams’ foreboding piece of music has gone down in history as one of the most memorable theme tunes of all time.

It’s a huge part of pop culture, but poor Lenny from Kent has suffered from a severe phobia of the song since the age of 12, causing her to break down, scream and cry whenever she hears it.

Finally, she called into This Morning and was cured live during a conversation with regular stars The Speakmans.

On Monday’s episode of the ITV daytime show, Lenny from Kent chatted to therapists and life coaches Nik and Eva as she revealed how she has been plagued with fear over the piece.

‘When I was 12 years old, I was watching Jaws with my parents, ended up having really bad tummy pains, was told to go upstairs and lay down, and from then on I have had the most severe phobia of the theme tune,’ she revealed. 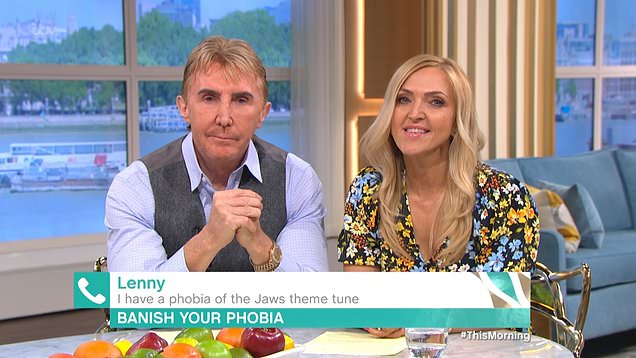 She admitted her phobia has been ‘really quite nasty’, causing her to scream and cry whenever she hears it – but she ‘loves sharks’.

Nik said: ‘Most people we work with who have a phobia of sharks, it comes from watching Jaws. What’s interesting about your case is the fact that it’s just the theme tune. When you had this stomach ache – you’re feeling ill, so you’re feeling vulnerable.’

He noted the way music is ‘very emotive’ and can transport people back to both positive and negative moments in their life, but he suggested the song actually helped save her life.

‘What that song represents to you is being in absolute pain, going down to your parents and saying, “Look I need some help for this”, they’re engrossed in the film and they just think it’s not a major problem but then you end up being in hospital,’ he explained.

‘What I want you to consider is instead of this being a bad thing, because of that tune, your parents thought. “Something’s going on here”, they took you to hospital and you got better. For me, I think that was a great thing, that song, because that helped you to get better.’

Lenny admitted she’d have to ‘listen to the tune’ to see if she felt any better after Nik’s advice, and added: ‘It sounds very much like it actually saved my life because I wouldn’t have gone to hospital otherwise.’

Phillip Schofield then suggested they play the song live on air, and the caller ended up giggling nervously instead of her usual breakdowns.

‘Honestly, I would’ve screamed and cried. Everyone knows how much I hate it,’ she laughed.

This Morning airs weekdays at 10am on ITV.