The 2019 Golden Globe nominations were announced on Thursday, and as is often the case with the Hollywood Foreign Press Association, which hands out these awards, there were several big surprises and head-scratching omissions.

[Read our updates on the 2019 Golden Globe nominations]

The Most Prominent Snubs

“Widows”: The director Steve McQueen’s last film, ”12 Years a Slave” (2013), took the Golden Globe for best drama, but McQueen’s new heist thriller was totally shut out on Thursday: “Widows” received not a single nomination. After a wan box-office take, this may spell doom for the movie’s award-season chances.

Sam Elliott: Many pundits wondered whether this beloved veteran could pull out an Oscar win for best supporting actor, but his “A Star is Born” performance wasn’t even nominated by the Globes. Expect this trophy to go to the “Green Book” actor Mahershala Ali: The Globes were the only major awards body to not give Ali the win for “Moonlight,” and they’ll seek to make it up to him.

“If Beale Street Could Talk”: Though this sensitive romance managed nominations for best drama, best screenplay, and best supporting actress for Regina King, the director Barry Jenkins missed, and Nicholas Britell’s intoxicating score for the film was shut out of the best score category.

“Burning” and “Cold War”: Two of the year’s most acclaimed foreign films, with titles on opposite ends of the temperature spectrum, were shut out of the foreign film category. Still, one sure thing made it in: Netflix’s big Oscar play, “Roma,” which the Globes deemed ineligible for the best drama category since that race is reserved for English-language films.

A24: The hip indie studio that gave us “Moonlight” and “Lady Bird” has taken a top feature prize at the Globes each of the last two years, but A24’s best hopes — the comedy “Eighth Grade” and the drama “First Reformed” — failed to crack their main categories. (At least the “Eighth Grade” star Elsie Fisher was nominated for best actress in a musical or comedy.) 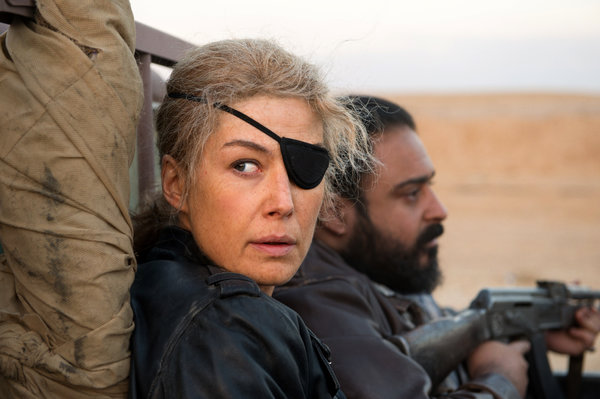 Rosamund Pike: No category presented stiffer competition than lead actress in a drama, yet Pike vaulted over contenders like Yalitza Aparicio for “Roma,” Viola Davis for “Widows” and Julia Roberts for “Ben Is Back.” What’s more, Pike’s war-correspondent film also managed a best song nomination for its Annie Lennox tune. Not bad for a movie that stalled at the box office last month.

“Vice”: Adam McKay’s Dick Cheney biopic proved to be the unexpected nomination leader this morning, picking up three acting nods for Christian Bale, Amy Adams, and Sam Rockwell as well as nominations for screenplay, director, and best musical or comedy. While “A Star Is Born” missed for Elliott and its screenplay, “The Favourite” failed to get director Yorgos Lanthimos” in contention, and “Mary Poppins Returns” couldn’t even manage a best song nomination, “Vice” excelled in basically every category it was eligible.

Peter Farrelly: How much did the Golden Globes love the racial dramedy “Green Book”? Enough that this “Dumb and Dumber” director earned a nomination over far more acclaimed work by Jenkins, McQueen, Ryan Coogler (“Black Panther”), and Yorgos Lanthimos (“The Favourite”).

Charlize Theron: The director Jason Reitman has continued to flog his D.O.A. political film “The Front Runner” through awards season, but it was Reitman’s spring comedy, “Tully,” that surprised on Thursday, scoring a best actress nomination for Theron’s performance as a harried mom.

“Mirai”: The Globes usually go for big and bigger when it comes to the animated feature category, but they eschewed the winter hit “Dr. Seuss’ The Grinch” for this far less expensive, heartfelt Japanese entry.