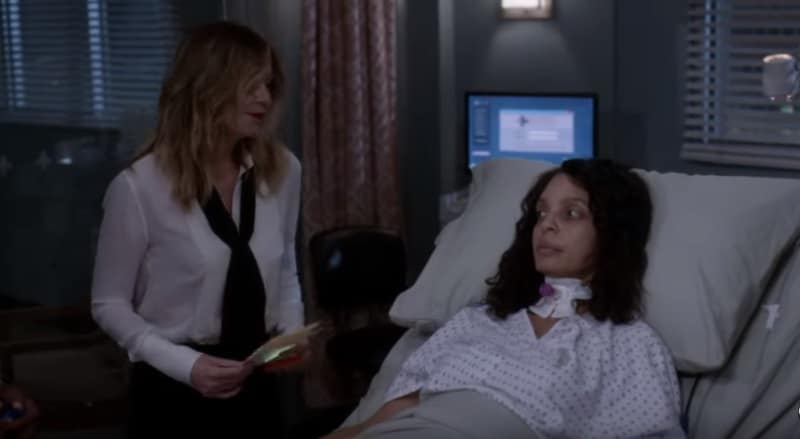 Siena Goines was a Grey’s Anatomy cast member who played the role of patient Natasha Deon. During the episode titled “Help, I’m Alive,” she arrived at the hospital with serious injuries.

The early report was that Natasha fell three stories from a hotel balcony and her fiance arrived at the hospital, stating that they were supposed to get married “tomorrow.”

The story of Natasha and Garrett stretched over to the latest Grey’s Anatomy episode, titled “Girlfriend in a Coma.”

Meredith (Ellen Pompeo) watched over the relationship between Garrett and Natasha very closely, as he tried to tend to her every need — especially as Natasha’s condition deteriorated in the new episode.

Why do viewers want to know what happened to Natasha on Grey’s Anatomy cast?

As the February 7 episode progressed, it became pretty obvious that fans on social media were growing more interested in what had happened to Natasha on the show.

Sometimes, when a patient arrives at the hospital, it’s uneventful in nature, causing viewers to forget what led to a particular injury. Other times, the story of a patient becomes more involved while they are at the hospital, drawing in the audience.

Both examples fit with this case.

There are going to be a lot of Grey’s Anatomy spoilers ahead.

During “Girlfriend in a Coma,” the episode became very emotional toward the end. Natasha asked to have a ventilator that was helping keep her alive removed, as she knew that she was dying and wanted more comfort.

Then, a lot of the Grey’s Anatomy cast members helped Natasha and Garrett get married — r before she died.

One of the points of this episode was to provide a time jump from the fall storm to a current timeline in the show.

Using what happened to Natasha as a way to show that time had elapsed, the writers were also able to show more of the interactions between DeLuca (Giacomo Gianniotti), Lincoln (Chris Carmack), and Meredith.

90 Day Fiancé's Fernanda Flores Is Dating Someone From Bachelor Nation

May 26, 2020, Comments Off on 90 Day Fiancé's Fernanda Flores Is Dating Someone From Bachelor Nation

American couple FINALLY get a tour of Pompeii after lockdown

May 26, 2020, Comments Off on American couple FINALLY get a tour of Pompeii after lockdown
We and our partners use cookies on this site to improve our service, perform analytics, personalize advertising, measure advertising performance, and remember website preferences.Ok