Marvel finally lets superheroes sit in the shadows and brings monsters center stage with their new Disney + special, “Werewolf by Night.” Filmed primarily in black and white, audiences are immersed in a gothic atmosphere for one night that is filled with violence and vengeance. Director Michael Giacchino channels his adolescent love of “Creature Double Feature” and “The Twilight Zone” by partnering with writers Heather Quinn and Peter Cameron to create one of the most intriguing Marvel projects to date.

Ulysses Bloodstone, a renowned monster hunter, has passed and his widow has summoned the best monster hunters from all over to pay their respects. Among them is Jack Russell (Gael García Bernal) and Ulysses’ estranged daughter Elsa (Laura Donnelly). The animated corpse of Ulysses reveals the crew is actually there to fight for the role of the ruby-red bloodstone’s new owner, a birthright that Elsa has come back to claim. In order to do so, the gang of killers must retrieve the bloodstone from the back of a monster lurking in the castle garden which is conveniently littered with various weapons. Once the competition begins, blood is shed, alliances are formed, and secrets are revealed.

The set design of “Werewolf by Night” will immediately capture audiences who are fans of old-school horror films and Universal Monsters. Various creature heads are mounted on the walls as trophies and the interior of Bloodstone’s castle is sleek and elegant, which aligns with other Marvel characters who come from a lot of money. Shot in monochrome, aside from the radiant red bloodstone itself, the set looks exactly like a fabrication that speaks to the specific stylization to which it is trying to pay homage. Thanks to the handiwork of production designer Maya Shimoguchi, nothing about this world seems truly real, and yet that aesthetic plays in the film’s favor. Cinematographer Zoë White also paints a beautifully moody evening and captures lighting in a smooth and seductive manner that lures audiences into this seemingly dangerous world.

It wouldn’t be a Marvel movie without fast-paced action filled with fight sequences, and fight coordinator David Conk delivers plenty of punches. Surprisingly, there are some fairly graphic kills and gruesome injuries. However, it’s just borderline violent enough to appeal to the young Disney and Marvel audiences without inducing nightmares. There’s an impressive balance of violence and comedy within its short run time of 52 minutes. Another pleasant surprise is the use of practical effects. The creature design is fantastic and Jack Russell’s werewolf transformation is reminiscent of “An American Werewolf in London” because of its lycanthropic features with human facial elements remaining. Marvel fans will be delighted to see Man-Thing on the big screen who has a heartwarming and hilarious relationship with Russell. 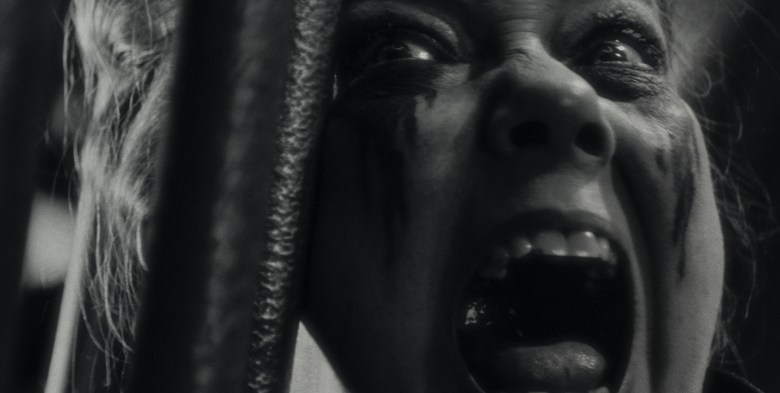 The storyline is tight and concise but leaves one craving more. Due to its short run time, the characters are not able to be fully developed and explored. It would benefit Marvel to dive deeper into Jack Russell’s character and summon more monsters in the future, not just because Halloween is around the corner. There are hours and hours of superhero content but the subtext of these monsters aligns with the Marvel ethos. Utilizing elements of dark comedy, light romance, and friendship, “Werewolf by Night” is successfully able to balance fun and fright.

Michael Giacchino also composes a larger-than-life score that transports audiences back to the golden age of horror. He successfully blurs the line between man and monster while pushing the envelope on how dark yet delightful MCU characters can be. “Werewolf by Night” takes an admirable approach to what it means to be a monster and how sometimes the worst monsters are man himself. However, Giacchino emphasized in his Q&A that “humanity deserves empathy”. With his directorial debut, he is able to shine a light on the complexities of man’s dual nature that is suitable for both adults and children alike. In a world full of flashy superheroes, Giacchino shows audiences that sometimes it’s ok to be a monster instead.