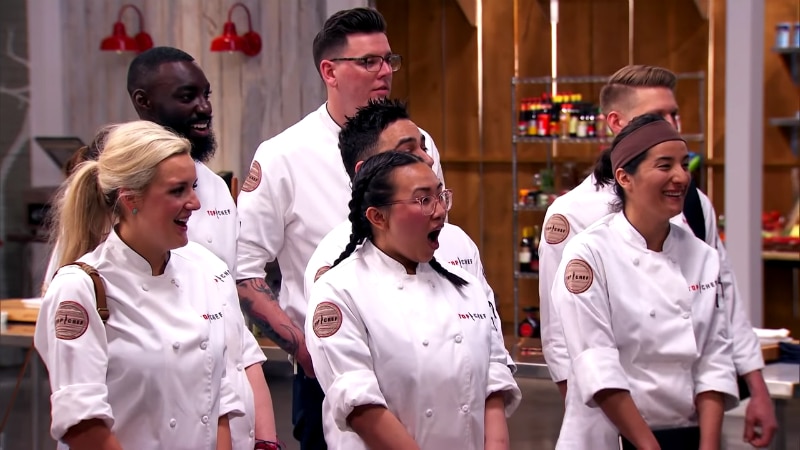 Bravo’s beloved culinary competition, Top Chef, returned for season 16 Thursday evening. The show has traveled all over the country over the years, touching down on culinary hotspots like Miami, Chicago, and Las Vegas. This season heads to the Bluegrass State, Kentucky, known for its Bourbon Trail, Hot Brown sandwich, college basketball, and a little horse race you may have heard of, the Kentucky Derby.

One thing missing (for the most part): Judge Gail Simmons, who is noticeably absent from most of the season as a result of her pregnancy and subsequent birth of her second child.

Rest assured, though, she will make a few appearances at the tail end of the season. Filling in for Gail is Nilou Motamed, former editor-in-chief of Epicurious and Food & Wine magazines.

The premiere kicks off with the contestants entering Churchill Downs in Louisville. After some quick introductions, Tom and Padma get right down to business and announce the Quickfire Challenge.

Keeping in line with the Kentucky Derby reference, “The fastest two minutes in sports,” the chefs have two minutes to form five groups of three, mise as many ingredients out of 20 as they can, and then after those two minutes, create a cohesive dish in 20 minutes … without using knives.

That’s not easy to do when you’re paired with two other complete strangers, who also happen to be your competitors. Still, the chefs jump right in, getting as much as they can done before their knives are taken away.

After sampling each team’s dish, Tom and Padma declare the green team (Pablo, Justin, and Sara) the winning team, and announce the prize: Two VIP tickets each to the Kentucky Derby.

Next up is the Elimination Challenge, with David Danielson, the executive chef for Churchill Downs, serving as the guest judge. The chefs will be cooking for the Top Chef Kentucky Derby party for 200 VIP guests, keeping the same groups, but competing not as a team: competing against each other.

The chefs head out to Whole Foods for their ingredients, and as they carouse through the aisles grabbing what they need, we get a glimpse into who they are and the dishes they’re brainstorming.

Nini wants to display her Vietnamese heritage and goes with blackened catfish, while Kevin decides to make homemade ricotta (as does Caitlin, who’s making tomato cobbler, a riff on tomato pie. “I can do it in my sleep and don’t have to think too hard about it,” she declares.

David gets in line and as his items are being scanned, realizes he forgot to get flour for the gnocchi he wants to make. Why he can’t just run back and get it before paying is a mystery, but he immediately starts to form a plan B and make a vegan soup with potatoes and bok choy.

Adrienne’s making stuffed tortellini, which she realizes is “ambitious” given the amount of time she has. Brandon muses he thinks it will take too long, but Adrienne is undeterred … for a little bit. Eventually, though, she realizes he’s right, and then decides to go with fettuccine instead, but she’s not happy she can’t go with her original dish.

Meanwhile, we find out that Kelsey and Sara are friends, having worked together in the past. “We’re both feisty southern girls” says Sara, adding they’re pretty much the same person only Kelsey “has a smaller ass and blonde hair.”

Pablo wants to highlight his Miami roots and do a seafood and bourbon dish. Like Nini, Natalie is also choosing to prepare a Vietnamese dish, because her mother prepared a lot of Vietnamese dishes while Natalie was growing up. We learn that Natalie quit her job 10 months ago to take care of her mom, who has Parkinson’s disease, and she worries she’s a bit rusty in the kitchen.

After a day of prep work for the big event, the contestants head to the house where they’ll be staying to unpack, unwind, and get settled. “Cheers to this big-ass house!” we hear one contestant say as we get a view of their digs from the outside. 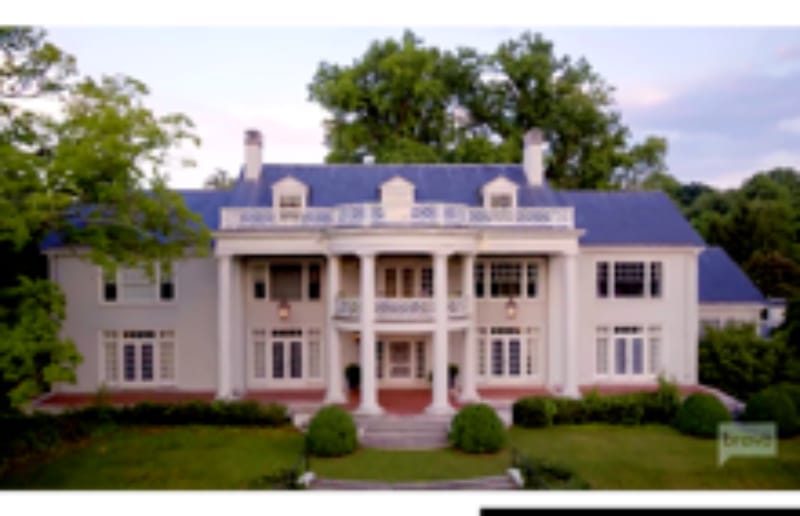 The next day, the chefs set up their plates and the VIP guests (and their hats, because it’s a Kentucky Derby party) start to file in. 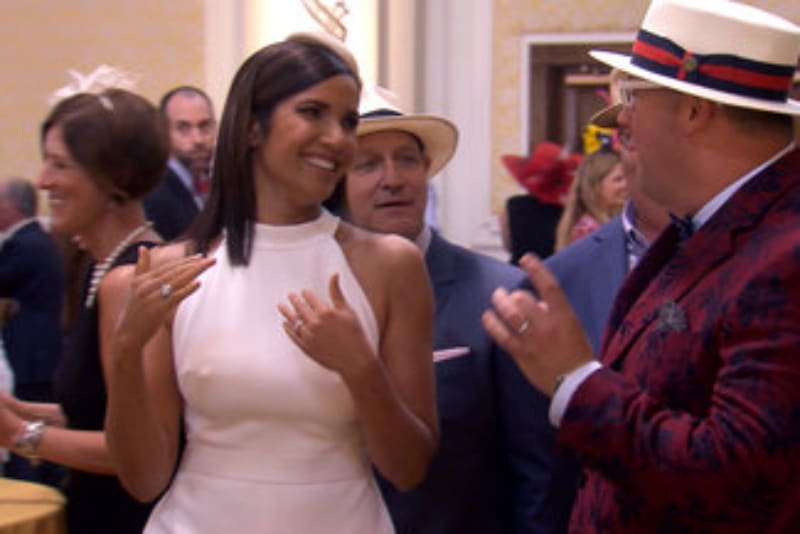 Padma calls each group up to the judges’ table with their respective dishes. After tasting each dish and some quick deliberation, Padma announces which chef won, which placed, and which showed.

First up is the red group. Eric is crowned the winner with his Bay scallops with a Ghanian honey glaze. Kelsey places with her Pimento cheese deviled eggs. Caitlin ends up taking the show prize for her tomato cobbler and salt and pepper biscuits, which Graham felt didn’t execute well.

Next up is the white group. Natalie takes the win with her halibut ceviche and picked red bell peppers. Eddie and his haricot puree and salmon crudo place, while Kevin’s pickled beets with homemade ricotta and arugula salad takes show.

The blue group is next. Nini wins for her blackened catfish and cabbage salad. Brandon places with his prime New York steak with smoked Gouda polenta. This leaves Adrienne crowned show, for her fettuccine with snap peas, mortadella, and pea and mint.

Moving on to the yellow group, David takes the win for his potato porcini soup with bok choy pesto, which Tom could not stop eating. Michelle places with her carrot top tagliatelle and braised chicken. Brian takes show with his spicy Thai country ribs with bourbon and mint, which Graham felt was undercooked. Brian says the pinkish color is from brining the meat, not from undercooking it; Graham disagrees.

Last but not least is the green group. Pablo knocks it out of the park with his tilapia crudo with green apple vinaigrette. Justin places with his coconut shrimp and grits with orange zest. And while the judges praised Sara’s bourbon-braised pork belly, the two other dishes outshined hers and she takes show.

We next see all the chefs at the ultimate judges’ table. Tom acknowledges that all the dishes across the board were good, though some had technical flaws. Of the five winners, the judges narrow it down to David, Natalie, and Pablo.

Chef David Danielson announces the ultimate winner, and it’s Natalie! This is a big boost to her confidence and diminishes those earlier concerns of being “rusty” in the kitchen (not to mention, she tells us, that her ex is a Top Chef fan and is probably watching).

But with the good comes the bad, and the judges decide that Caitlin, Adrienne, and Kevin had the worst dishes. The judges felt Kevin’s dish wasn’t particularly original, and if you’re not going to be original, your dish better stand out, and his didn’t.

The cherry tomatoes in Caitlin’s dish had so much moisture they made the biscuits soggy. Padma felt that Adrienne’s pasta would have been better with “editing.” Adrienne agrees, noting it wasn’t what she originally wanted to make. But in the end, Caitlin’s soggy dish made her the first chef of the season to pack up her knives and go.

All is not lost, however; she can still make a comeback in Last Chance Kitchen, which airs on Bravo’s website immediately following Top Chef.

Top Chef airs on Thursdays at 9/8c on Bravo.