If ever you get a chance to play cards for money with Kelly Clarkson, take it — she has no poker face. Hence, her “restrained” reaction (pictured) to Tuesday’s resolution of The Voice’s Monday-night cliffhanger.

After hearing that four-chair turn Holly Forbes’ daughter was a big Ariana Grande fan, Kelly was sure that she had about as much of a shot at recruiting the contestant as Blake Shelton or John Legend. But then Holly revealed that “I grew up listening to Kelly Clarkson,” so she was the coach that the contender wanted.

Once that decision was made, we moved on to more of the Blinds, including a couple that were so abbreviated, if you blinked, you’d have missed them. Read on, and we’ll review all of the advancing artists… well, as best we can, given what we got to hear!

Bella DeNapoli (Team Ariana), “Damaged” — Grade: A | Was it just me, or that was that performance almost Celine Dion-worthy? The Long Island native tackled Danity Kane with enviable range and control. Along the way, she also nailed the kind of pitch-perfect runs that make Ariana’s head turn even before her chair. And did I mention that with Dad’s help, the three-chair turn rearranged the song as a heart-wrenching ballad? ’Cause she did. Brilliantly. 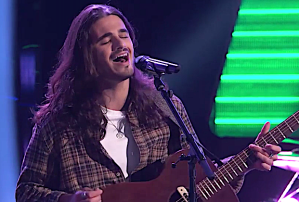 David Vogel (Team Ariana), “breathin’” — Grade: B- | Though intimidated by the prospect of covering Ari in front of his “dream coach,” this 23-year-old delivered a fine, occasionally soaring, rock rendition of her hit (and smartly ended it with a nice, long run — her Achilles’ heel, we’ve been learning). But there was nothing that really distinguished the one-chair turn’s voice, leaving me with the feeling that I’d remember his well-executed hair tosses more vividly than his Blind.

Janora Brown (Team Legend), “Angel of Mine” — Grade: B- | I wanted to really love this 22-year-old’s Monica cover; her personality is as warm and inviting as a smile. Unfortunately, (I suspect) nerves left her sounding less like a star in the making than a star who was shaking. Maybe it was just excess vibrato? The two-chair turn clearly has a lovely voice (and shone whenever she went for a run), she just didn’t seem to have the control to make the most of it.

Kaitlyn Velez (Team Blake), “Please Don’t Go” — Grade: B+ | Bringing down Mike Posner’s upbeat hit, this Long Island 21-year-old inspired Blake and John to swivel their chairs almost immediately with the intimacy of her ukulele-accompanied performance. If I’m not mistaken, she went a mite flat here and there, but I was still won over by the uniqueness and beauty of her voice; it reminded me of bubblegum being stretched out, which sounds weird but I mean as a compliment. 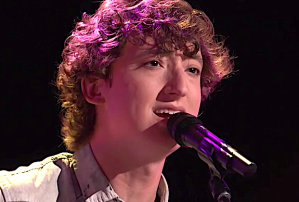 Berritt Haynes (Team Blake), “Mercy” — Grade: ??? | Not sure what grade to assign this fella, given that we were only shown a couple of seconds of his audition. (Sounded pleasant, at any rate.) More time was spent on the teenager, who has what’s known as “sudden-death disease,” explaining that COVID had prevented him from being granted his Make a Wish to see a taping of The Voice. But then his mom had sent in a tape of him singing and gotten him a tryout on stage… which we then didn’t get to watch in full!

Clint Sherman (Team Blake), “Brown-Eyed Girl” — Grade: ??? | Argh — another truncated tryout. From what little we got to hear, though, I’ll be surprised if Clint makes it through the Battles. He didn’t even get a backstory package — never a good sign, that. 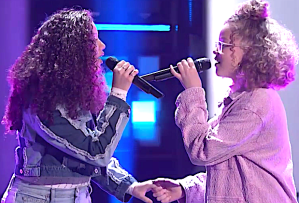 The Cunningham Sisters (Team Kelly), “Never Alone” — Grade: A | As cute as a bucket of puppies, these self-described “pop-gospel artists,” once bullied for being biracial, didn’t just raise the roof, they blew it clear off with an audition that was truly spirited. Yes, there might have been slightly rough edges to their performance here and there — Kelly dinged them on not being entirely in sync — but the two-chair turns demonstrated great range (those lows!) and sang with such irresistible oomph that I wanted to swivel my chair even though I was on the couch!

So, what did you think of Tuesday’s auditions? Holly’s choice of coach? Those abbreviated Blinds? Vote for your favorite of the night below, then hit the comments.