Guy Fieri is one of the most recognizable and popular chefs on television. The restaurateur and “Diners, Drive-Ins And Dives” host became one of the biggest faces on the Food Network after he was crowned champion in Season 2 of “The Next Food Network Star” in 2006, according to Insider. Obviously, audiences had an appetite for Fieri’s personality, and could not get enough of him on screen. Per IMDb, Fieri has hosted and executive produced several Food Network shows, including “Guy’s Ranch Kitchen,” “Guy’s Grocery Games,” and “Diners, Drive-Ins And Dives,” which has been on air since 2006 — and made him one of television’s highest paid hosts. Forbes reported in May that Fieri signed a whopping $80 million contract extension with the network for three more years.

Much of Fieri’s success has to do with his approachable personality and enthusiasm for food, but his name has also become ubiquitous in food media. As it turns out, Fieri isn’t actually his real name. Keep scrolling to find out what Fieri’s real legal name is and why he decided to change it.

Guy Fieri changed his name to honor his roots 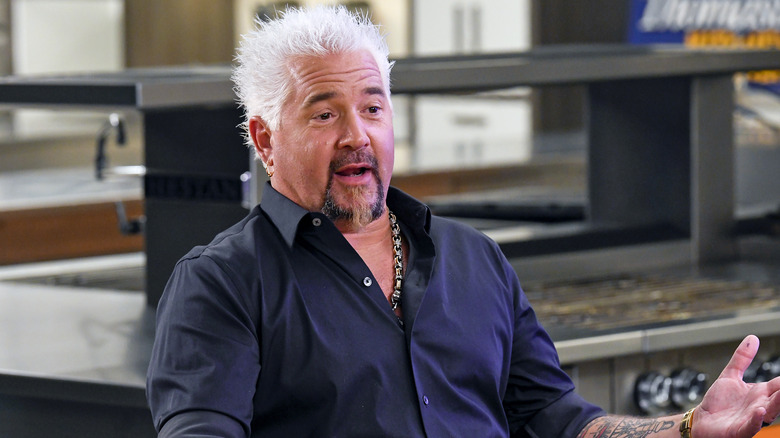 According to Insider, Guy Fieri was born Guy Ramsey Ferry. Now, foodies will be quick to draw the similarity between his middle name with the name of another famous chef, Gordon Ramsey, but Fieri actually changed his legal name before he was famous. The outlet reported that the “The Interview” star dropped his middle name and changed his last name from “Ferry” to “Fieri” because he wanted to honor his grandfather and his Italian roots.

Per Grub Street, Fieri’s grandfather Americanized his last name to “Ferry” when he immigrated to the United States. Fieri decided to normalize his Italian heritage, and made the change when he married his wife, Lori, in 1995.

It’s safe to say that the name change worked for Fieri, who has built a food empire with his brand. He also hopes to use his name to create change in the world, telling Delish in 2018 about his philanthropic efforts. “I’ve been given all these opportunities. Why not share it with someone?” he said.