The Crown has ARRIVED on Netflix and if you’re a fellow royal enthusiast, then you’ve already watched the entire thing and currently have some questions. Primarily: when will Season 5 drop and how much of what we saw on screen was real—especially when it comes to Queen Elizabeth and Princess Diana’s tense relationship. Truly, I never wanna hear anyone complaining about their mother-in-law again, because that. was. rough.

The Crown depicts the Queen being *wildly* cold to Diana—like, we saw the Queen refuse to speak with Di ahead of her royal wedding to Prince Charles, and at one point, she looked completely horrified when Diana gave her a hug. Diana, on other hand, seemed only to want to be accepted and loved by her husband’s family. So what were things like between Diana and the Queen IRL? To quote the immortal words of the internet’s most beloved gif:

The Queen Fully Ignored Early Signs That Diana Was Unhappy

According to respected royal biographer Ingrid Seward in Reader’s Digest, the Queen pretty much expected Diana to be a natural fit in the royal family. And when Diana moved into the Palace after her engagement, Her Majesty even wrote a friend, “I trust that Diana will find living here less of a burden than is expected.”

But as The Crown made all kinds of clear, Diana struggled with loneliness and boredom during this period, and the Queen basically ignored all the early signs that she was unhappy. Per Ingrid, “nearly everyone, from the Queen to the staff who looked after Diana, attributed her behavior to a bad case of ‘nerves.'”

The Queen Initially Empathized…Until She Didn’t

After the royal wedding, Seward reports that the Queen was more “understanding of Diana’s difficulties” and had a natural empathy for her. Diana even told Seward—who’s been reporting on the royal family for years—that “I have the best mother-in-law in the world.”

And royal reporter Victoria Arbiter (whose father worked for the Queen) says that “Contrary to popular belief, Diana had a deep respect for the monarchy and she particularly liked the Queen but, freed from the constraints of royal life, she did not was no more necessary to live by its unwritten rules. ”

As Diana and Charles’ marriage crumbled, Diana decided to visit the Queen at Buckingham Palace for advice—and at first it went well! One staff member told Seward, “Diana was usually in a lot better mood when she left than she was when she arrived.” But eventually the Queen began to fully dread the meetings, referred to Diana as a “nervy racehorse,” and according to a footman, this convo happened:

So yeah…that moment where the Queen refused to hug Diana in The Crown? Not entirely based in fiction.

In 1986, Diana Confronted the Queen About Charles’ Affair

According to multiple biographers (and Diana’s private secretary) who were interviewed for the Channel 5 documentary Two Golden Queens, Diana and the Queen met in 1986 after Diana found out about Charles’ infidelity.

“For Princess Diana, there was a hope that somehow the Queen would intervene to make things okay in their marriage again,” Diana’s Private Secretary Patrick Jephson said. “But there was a communication problem between two very different generations. Between two strong women. There was a certain school of traditional royal thought that Diana should stop being silly.” 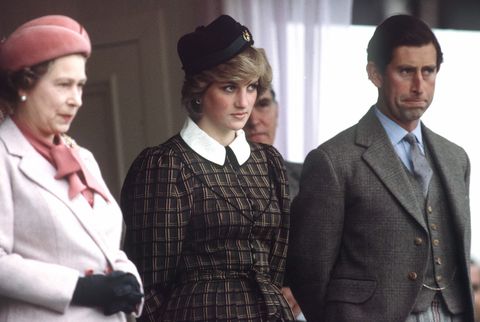 Basically, the Queen wanted Diana to look past her marital problems and preserve the reputation of the royal family but, per Jephson, “Diana wasn’t made like that. Diana was angry. Diana was defiant. She thought the heck with this, I’m not going to be swept under the carpet.”

Diana described one of her conversations with the Queen in a taped conversation with her speech coach, reportedly saying, “So I went to the top lady, sobbing, and I said ‘What do I do? I’m coming to you, what do I do?’ And she said, ‘I don’t know what you should do. Charles is hopeless.’ And that was it, and that was help. So I didn’t go back to her again for help, because I don’t go back again if I don’t get it the first time.”

Truly, yikes. As you might expect, Diana and the Queen’s relationship continued to devolve, and—as we’ll doubtless see next season on The Crown—eventually the Queen gave the couple permission to divorce.