“The Good Place” creator Mike Schur describes Thursday’s episode, in which D’Arcy Carden plays multiple versions of her character Janet, as “a form of psychological torture.” In a desperate move to save the lives of demon Michael (Ted Danson) and their human friends Eleanor (Kristen Bell), Chidi (William Jackson Harper), Tahani (Jameela Jamil), and Jason (Manny Jacinto), Janet whisks them into her boundless Void. Michael arrives unscathed, but the mortals aren’t so lucky: Each of them look exactly like Janet.

“The reason to do this isn’t to have D’Arcy run around and goof off as her castmates,” said Schur after a screening of the episode. “[Eleanor is] literally asking herself, ‘Who am I? What version of me am I right now?’ and so is [Chidi]. This is something philosophers talk about.”

This season, Eleanor realized that in one of the many timelines in The Bad Place, she and Chidi fell in love. In the Void, she confronts him with this fact, but he denies its relevance: The Chidi he is now had different experiences, and is not the Chidi from that other timeline.

The show wanted to explore the concept of identity and self that would push Eleanor to a crisis point, but “The Good Place” consulted with philosophical advisers Todd May of Clemson University and Pamela Hieronymi of UCLA before working in the absurdist world Schur created. 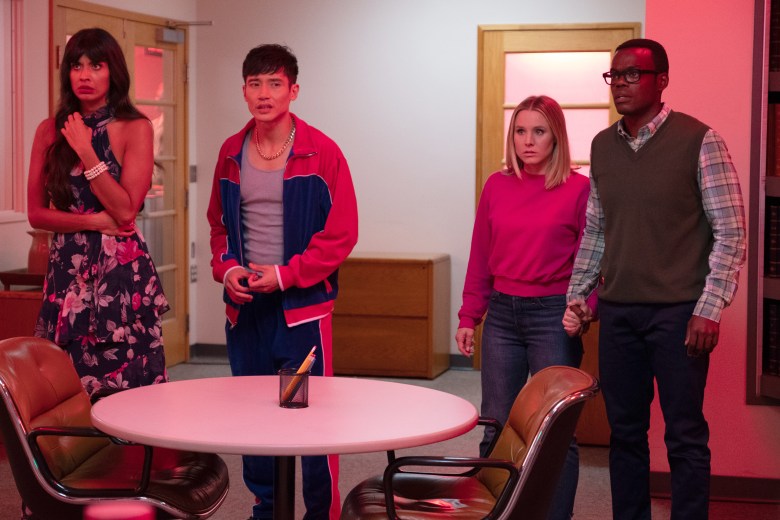 “Todd May was in California, so he came in and ran us through John Locke, and [David] Hume, and Derek Parfit,” said Schur. “[We] said, ‘Tell us all about philosophical conceptions of the sense of the self,’ and then from there we had the idea that Eleanor’s sense of self would crumble and that would be the thing that threatened to have everything blow up.”

Josh Siegal, who co-wrote the episode with Dylan Morgan, said, “We sent [Todd] a draft, and he graded it like a paper.”

“I’d say he gave us a B+ unofficially, then he suggested little tweaks to the language in terms of how Chidi-Janet is explaining the theory,” said Schur. “On the actual show, we discuss these things in one or two sentences, but we want to internally make sure we understand them at a deeper level.”

While the writers wrestled with knotty narrative problems, Carden was faced with playing the Janet-ized versions of each of her co-stars, channeling their mannerisms and speech patterns. First, the entire cast performed the scene in the Void as themselves, filmed for her reference (and watched “one million times”). Carden also recorded the cast doing a table read, which she listened to repeatedly.

“It’s not necessarily hard to play five different characters, but it is hard to play five really well-established characters that I know for years now. It’s a different kind of thing than just making up five new ones,” she said. “We didn’t want it to be like ‘SNL’ sketch characters; we didn’t want to do over the top. It was a really fine line between not doing them enough so that we could tell who each one was and doing it too much.”

Carden said she found playing Chidi particularly challenging. “He has such a distinct voice that I could hear it so well in my head. That was hard. I lost my mind. … I remember during the read-through, hearing Will Harper as Chidi read a big chunk [of dialogue] and my thought was, ‘Oh, he’s got a lot to memorize this episode.’ And then I was like, ‘Oh no!’ The whole thing was very disorienting.”

Shooting the multiple Janets was also a technical challenge. Schur said, “When we first had the idea a million years ago, we were like, ‘Can this be done?’ Well, ‘Orphan Black’ did it like a thousand times. That’s what I kept thinking.”

Often, Carden was shooting by herself, delivering dialogue to poles with a mark for eyeline guidance or opposite stand-ins wearing Janet wigs. The biggest challenge came at the end of the Void scene, when Eleanor begins to lose her sense of self. This causes her appearance to fluctuate from Janet to other people of all shapes, genders, and sizes. It’s not until Chidi finally admits his feelings for her with a climatic kiss that she settles into her own Eleanor body. 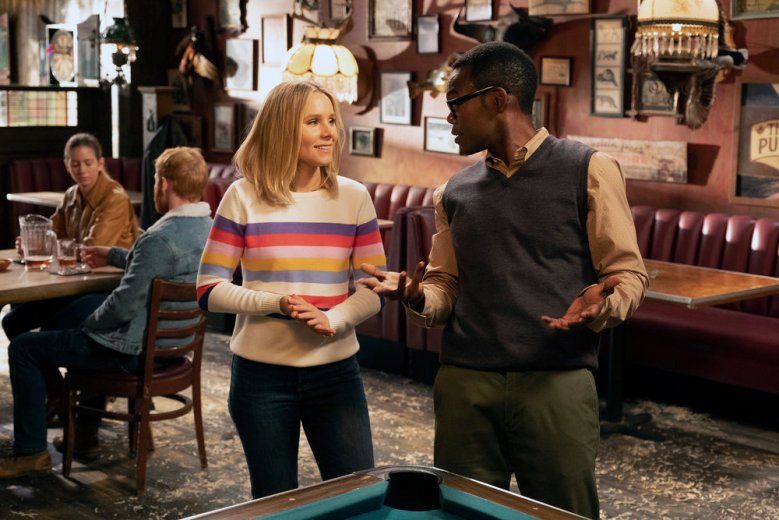 Kristen Bell and William Jackson Harper in “The Good Place”

“There was a long pole with a literal pair of lips on it… exactly at my lip height. It was on a Lazy Susan that was controlled by some dude,” Carden said about the kissing rig that was used. “But it was a pole, it wasn’t a body, so I had to sort of hug air and kiss these lips and then we would start spinning, but I couldn’t smile or laugh. Then I had to kiss Kristen, but it had to match exactly the head tilt and every inch of us had to match. She was on a little apple box and we had to be pressed against each other in a not-sexy way at all. Every little inch had to be perfect. It was like surgery, almost.”

“And then she had to do that with Will[iam Jackson Harper],” said Schur. All told, Carden spent 40 minutes performing in the 22-minute episode.

Stephen Merchant also guest stars as Neil, the head of Accounting, where every action that humans perform is assigned a positive or negative score. The tally determines whether a person is worthy of entering The Good Place, but it’s revealed that no one has been accepted into The Good Place for 521 years. Schur said that number will be addressed in the next episode.

“It was always reserved for the elite, top 5 percent,” said Schur. “So we figured once westward expansion begins, everyone was screwed. Harriet Tubman, Jonas Salk, and the Golden Girls were the main [ones]. Basically, anyone Antebellum in America is screwed pretty much.”