For the first time since at least Christmas, the spotlight now falls on the theatrical side of the now multi-platform feature film release universe. With “Godzilla vs. Kong” adding domestic to its initial $123-million overseas gross and most of the country open, if still without many theaters, it’s expected to have the best results of any release in over a year.

But theaters will be competing with HBO Max, where the film will be available free to subscribers, when it launches stateside March 31. We won’t know the streaming figures, unless Warner Bros. chooses to share them.

Perhaps that’s why this week was positioned as more status quo, with so much attention going to Legendary Entertainment’s MonsterVerse entry. The changes are minor from last and other recent weeks’ results. All three of the current #1 titles on four VOD charts also held top spots last week, with no new or reduced price offerings giving much competition.

“Monster Hunter” (Sony) claims the most impressive score this week. It remains #1 at GooglePlay, and is the only top-slot title to rank on all four lists. Paul W.S. Anderson’s film, initially PVOD but now at standard pricing, has been #1 on all of the charts at different times, and at least one every week now since mid-February. Its worldwide theatrical gross has been only $30 million (off a reported $60 million budget), but its strong home performance so far, though not quantified, could make up the loss.

“Promising Young Woman” (Focus) stayed at #1 at AppleTV, which tends to attract a more upscale crowd, at least based on its viewers’ preferences. Another release reduced to regular price after decent PVOD play, the film’s Oscars-timed standard price showings have rebounded (with only price-based FandangoNow, which favors PVOD films, not listing this week).

“The Little Things” (Warner Bros.) can claim the sole #1 spot on multiple charts this week. It tops FandangoNow and also Spectrum Cable (impressive since the latter lists by transactions, disadvantaging PVOD titles). This is the second of Warner Bros.’ initial same-day theatrical/HBO Max releases to move to PVOD after 31-day HBO Max play, and like “Wonder Woman 1984” is getting some second steam.

Now in its fourth month, “The Croods: A New Age” (Universal), also standard price, is the second title to place on all four, as high as #2 at GooglePlay. In its 18th week in theaters, it still placed sixth on the weekend top 10, with a domestic total of $56 million, plus $104 million more worldwide. Figure “A New Age” has been a relative goldmine for the studio as its first early PVOD play that included a theatrical debut during the pandemic.

“News of the World” (Universal) in its first week at $5.99 placed high on three charts (lagging Spectrum should catch up next week). The consistently strong “Wonder Woman 1984,” the first HBO Max title to go PVOD, also made three lists.

The top new PVOD release this week is the multi-Oscar-nominated “The Father.” It was the highest-ranking, high-priced film at AppleTV, though at FandangoNow, “Boogie” (Focus) was a bit higher for its only chart appearance so far.

Standard-priced “The Vault” (Saban) from veteran genre director Jaume Balagueró took off this week , getting as high as #3 at AppleTV among its three charts. The gold heist Spanish thriller, shot in English, stars Freddie Highmore. 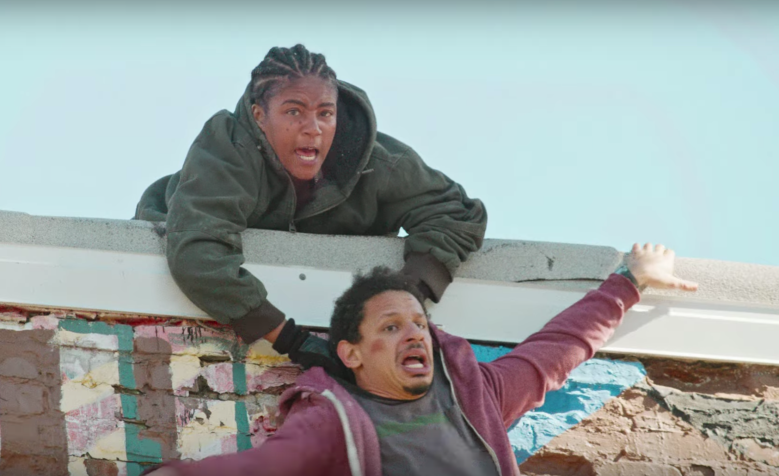 Led by the comedy “Bad Trip,” Netflix has the most original-dominated top 10 film chart in recent months right now. “Bad Trip” is an “original” in that it had no play prior to last week, when it debuted. An Orion Pictures production, the road trip prank movie with Eric Andre, Lil Rey Howery, and Tiffany Haddish was set for theatrical release via MGM last spring after a planned South by Southwest premiere. Nearly a year later, the film has found delayed success at Netflix.

The next three most-viewed films are debuting originals as well. At #2, “Secret Magic Control Agency” is a Russian animated title the streamer acquired for most of the world. “Seaspiracy,” at #3, is an ecological documentary about imminent threats to oceans. Fourth is “A Week Away,” a musical about a wayward teen finding faith and romance at a religious summer camp.

As has been the case for months, there’s zero sign of Netflix’s many Oscar-nominated films. Any shot of their return could be in the days before the awards (on April 25) or for any winners just after.

Ranked by number of transactions, with position as of Monday, March 29

Ranked by revenue accrued not transactions, for March 22-28

Ranked by number of transactions, with the daily position as of Monday, March 29

Ranked by transactions between March 19-25, all priced $6.99 except where noted

Most-viewed, current ranking as of Monday, March 29; originals include both Netflix-produced and -acquired titles