Since The Mandalorian doesn’t deal with Jedi nor Sith, lightsabers and duels haven’t been a thing on the series. That, of course, doesn’t mean there hasn’t been action; there’s been a ton of that. But there just hasn’t been a lightsaber in sight, which is new for a Star Wars series.

That changed with this most recent episode thanks to the appearance of Ahsoka Tano. For fans that knew Ahsoka in Star Wars: The Clone Wars, but may have missed her in Star Wars Rebels, her lightsabers are a different color. Why have they changed? And how is that even possible? Ahsoka’s lightsaber evolution has a longer life than many Force wielders out there. [Spoiler alert: Spoilers ahead for The Clone Wars and The Mandalorian Season 2, “Chapter 13: The Jedi” ahead].

While Bo-Katan’s entrance on The Mandalorian was jolting and a surprise, even though it was rumored before this season started, Ahsoka’s entrance was very anticipated. The title of the episode was “The Jedi,” and Bo-Katan had already told Din Djarin that he would find Ahsoka Tano on the planet of Corvus. So fans were about 95 percent positive that they’d come face-to-face with the live-action version of the beloved Star Wars: The Clone Wars character in “Chapter 13.”

Still, seeing her white lightsabers was a very exciting moment. Going from animation to live-action, portrayed by Rosario Dawson for the first time, things were bound to be different. So her lekku and montrals and her fighting style were adapted for the live-action series.

But, her white lightsabers stayed the same. In Star Wars Rebels, Ahsoka first appears after being known off-screen as Fulcrum. She’s a Rebel spy and she appears with white weapons, as opposed to the green ones she last had on The Clone Wars’ fifth season. Blue, now that the seventh has come out. But where do these colors even come from?

The power source of a lightsaber is the kyber crystal inside of it, which young Padawans use to create their weapons during the Gathering ritual. The crystals themselves are colorless, but once created, the aura of the Jedi is what creates the color associated with their lightsaber. While common colors are blue and green, others like Mace Windu have purple or Rey has yellow.

To understand why Ahsoka’s change so often — and more so than other Jedi we’ve seen — you have to look at the whole picture.

When Ahsoka was first introduced, she had one green lightsaber

Going all the way back to the beginning, Ahsoka is first introduced with just one lightsaber, which is the standard. It’s green, which as stated above, is also quite common.

While there isn’t a fully accurate canon description of what green means, many think that a green lightsaber denotes harmony and goodwill. Blue, the other most common color, and one that Anakin Skywalker and Obi-Wan Kenobi are seen with, typically is associated with bravery.

In the middle of the series’ third season, Ahsoka has a new look that shows she’s maturing. And with that new look, she also gets another lightsaber. Most Jedi don’t have two, and in the show, it’s never said why she has two, although, in a Forces of Destiny short, she is shown training with it. But she’s really skilled and advanced for her age, so it’s probably just a preferred fighting style. And her backhanded stance with one of the two sabers has become a signature of hers, so it’s definitely paid off.

Unfortunately, her time with the Jedi Order is cut short when she’s framed for bombing the Jedi Temple by Barriss Offee. They, of course, take her lightsabers since they’re strictly a Jedi’s weapon. However, when she comes back to help lead a squadron of Clones in the Siege of Mandalore in Season 7, she gets them back. And they’re a bit different.

Since Season 7 just came out earlier this year, it’s a bit more fresh in fans’ memories, so you might be wondering, “But doesn’t she have blue lightsabers?” Yes. When Anakin excitedly gives Ahsoka back her weapons in Season 7, he “improved” them while she was away. They’re now blue, like his, and Ahsoka just gives him a sly smile in response.

In Season 7 of ‘The Clone Wars,’ Anakin gave her back her lightsabers, and they were blue 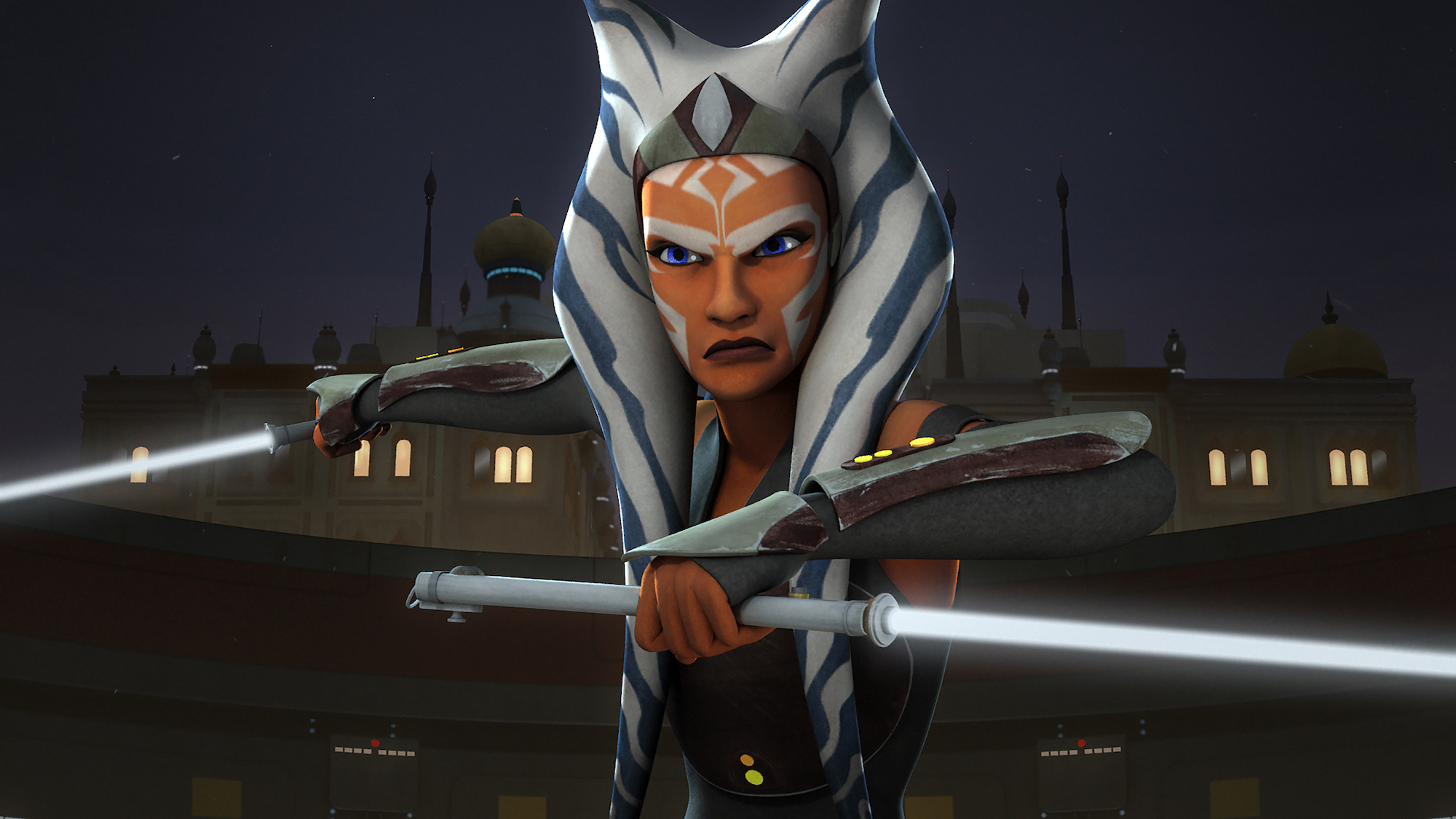 Dave Filoni said that Anakin knows lightsabers well enough to tinker with them and change the color without compromising the actual weapon.

“As far as the story goes, I wanted to show a clear connection between the master and apprentice relationship of Anakin and Ahsoka,” Filoni explained in a “Clone Wars Download” video on YouTube in April. “So I decided to shift her lightsabers to blue, like Anakin’s.”

He went further, saying that this shows that Anakin is “always thinking of her.” As if that’s not sad enough, Filoni then said that the lightsabers are a “a representation of [Ahsoka] in the story and his thoughtfulness regarding her.” And, of course, it also highlights his attachment and protectiveness toward her, further showing his utter disregard for the Jedi Code. Which then leads to his downfall in Episode III — Revenge of the Sith.

After the Siege of Mandalore, viewers watched Order 66 play out from Ahsoka’s point of view and she ultimately had to crash her whole ship of Clones. She and Rex were the only survivors, and she left her remaining lightsaber with the wreckage. She’d lost the other one in all the fighting. We later see Darth Vader looking for Ahsoka and finding this makeshift gravesite.

She ends up creating the white lightsabers we see in Star Wars Rebels and The Mandalorian in Ahsoka the novel out of an Inquisitor’s bled kyber crystals. She purifies them, and the chosen color, according to her aura, is white. Many have taken this to mean she’s indifferent to the Jedi. Regardless, she’s definitely on her own journey, one that’s stretched longer than most.