Stranger Things Season 4 sent Eleven (Millie Bobby Brown) and the Byers to a new town where they met new people. Even her friends back in Hawkins, Indiana made some new friends. One standout has been Hellfire Club dungeon master Eddie Munson (Joseph Quinn). All-American Eddie may be most viewers’ first impression of Quinn if they didn’t see the British Quinn’s previous work. So they wouldn’t even know he’s not American, but Quinn felt weird doing the accent.

Prior to Stranger Things Season 4, Quinn’s work includes Les Miserables, Howard’s End and Dickensian. He’s also been in Game of Thrones which wouldn’t betray him as a modern day American either. Quinn told Inverse it was a challenge “doing this voice that doesn’t feel normal in your mouth.” 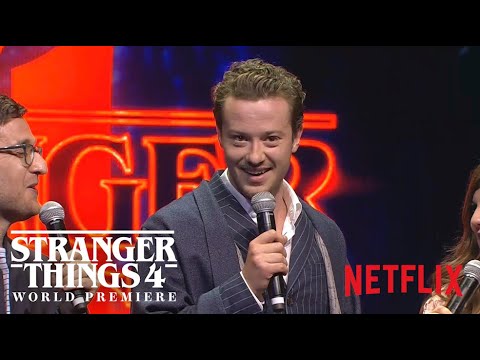 Quinn would practice the accent while not working. That was where he felt weird talking to restaurant staff in his Stranger Things Season 4 voice.

Quinn did enjoy getting into the action with the Stranger Things cast.

Quinn told Inverse he auditioned for Stranger Things by tape. The season was casting prior to the coronavirus (COVID-19) pandemic in 2020. They had already had a table read before production shut down. Still, Quinn said after watching two of his tapes, Stranger Things creators the Duffer Brothers offered him the role of Eddie Munson.

“It was very disarming, the fact that they just offered it to me, and made me increasingly paranoid throughout the whole job that they were going to think that they’d made a mistake,” Quinn said.