When the conversation about the best movie series to ever exist begins, it’s hard to leave Star Wars out of it. George Lucas‘ prolific film franchise changed the movie world forever, and the original trilogy was far ahead of its time. Star Wars’ amazing special effects, fantastic art direction, and spectacular narrative development all make it one of the most memorable franchises to grace the big screen.

One of the most fascinating things about Star Wars was the creative team’s ability to develop sounds, props, and special effects that made viewers believe they were in the middle of a real space war. The lightsaber, in particular, is one of the most iconic weapons in the films and has become ubiquitous with the Star Wars brand. Longtime sound designer Ben Burtt revealed that the lightsaber’s unforgettable sound actually came from a video projector’s motor and a TV set.

Star Wars is a massively successful franchise, even today 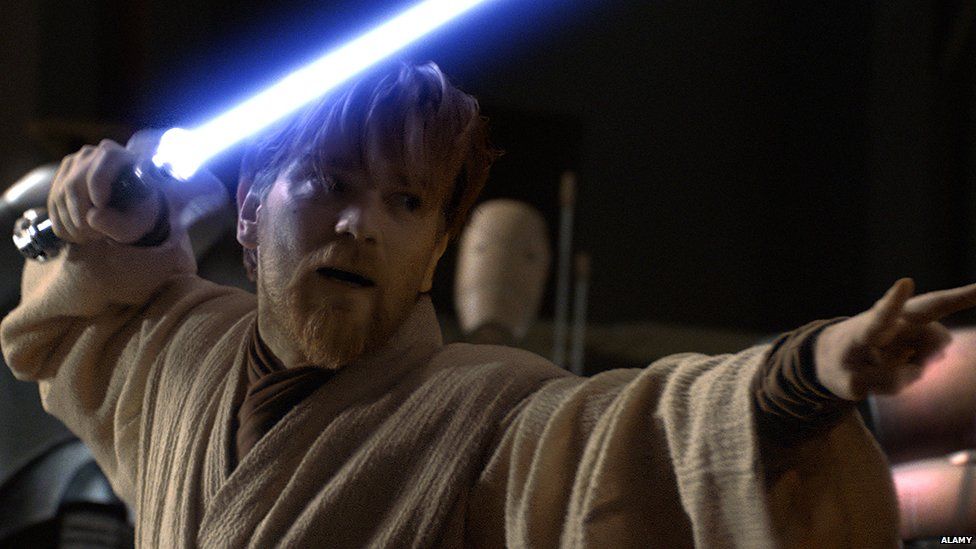 Star Wars broke the mold for science fiction films when it was initially released in 1977. George Lucas’ tale of a dramatic war in a “galaxy far, far away” took the film world by storm, and attracted viewers to theaters in droves. Although studios were reluctant to produce the film and only gave Lucas $11 million to produce it, Star Wars became a box office hit upon its release, grossing over $775 million according to Box Office Mojo.

After the release of A New Hope, Lucas went to work producing its sequels, The Empire Strikes Back and Return of the Jedi. The films were both financially successful, grossing over $549 million and $475 million, respectively. Both films are considered to be the best in the Star Wars saga.

Star Wars is known for its unique visual artistry, featuring some of the most imaginative creatures, costumes, and props in film. However, producing the visual masterpiece that was Star Wars took a lot of work, especially considering the relatively modest budgets the films received.

Regardless, the creative team was able to use innovative special effects tools to develop some of the most popular aspects of the film, such as the AT-AT walkers, Jabba the Hutt, and the iconic lightsaber.

Star Wars sound designer Ben Burtt had one of the toughest jobs in production. Tasked with producing original sounds for a myriad of objects that didn’t really exist, he had to dig deep to come up with ideas for compelling audio effects.

Luckily, he was able to find inspiration for the lightsaber’s iconic humming and buzzing sound by taking from the objects around him. In an interview on the Star Wars Youtube page, he revealed that the lightsaber’s humming sound actually came from an idle video projector.

“Immediately something went off in my mind and I had a feeling for what they would sound like,” Burtt said. “In the booth where we projected the films, those projectors made a hum…the motors would sit there with this magical, mysterious humming sound… I thought ‘that’s probably what a lightsaber would sound like.’”

He later explained that the lightsaber’s electronic buzzing sound came from a recording of a TV set.

“I was searching for some other element… I had a tape recorder with a broken mic cable,” he said. “When I walked past the television set in my apartment, it picked up the hum… that made a buzz, and I said ‘that’s a great buzz, that sounds dangerous.’

Burtt jokingly claimed that nobody said anything about the sounds when he brought them into the studio the next day, which he knew meant that they were “fantastic.”