Refuting the notion by Bob Chapek that ‘Shang-Chi and the Legend of the Ten Rings’ will be ‘an interesting experiment’ for the studio, the actor says instead, ‘We are the underdog; the underestimated.’

AceShowbiz –Simu Liu is clearly not happy with Disney CEO’s recent comments on his movie “Shang-Chi and the Legend of the Ten Rings“. Refuting the notion that the upcoming film is “an experiment,” the actor has fired back at Bob Iger’s successor.

“We are not an experiment,” so the Chinese-born star responded to Chapek’s remarks via Twitter on Saturday, August 14. Coming with his own description of the film, he stressed, “We are the underdog; the underestimated.”

“We are the ceiling-breakers. We are the celebration of culture and joy that will persevere after an embattled year. We are the surprise,” he added, before urging his fans and moviegoers to watch the film, “I’m fired the f**k up to make history on September 3rd; JOIN US.” 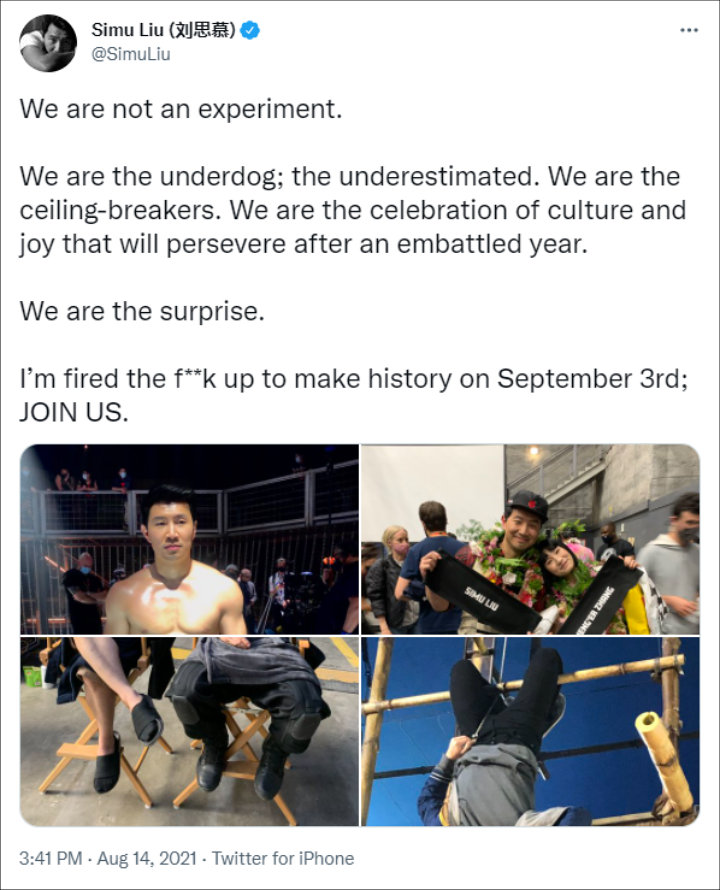 At Disney’s quarterly earning call with investors, Chapek explained the decision to give “Shang-Chi” an exclusive 45-day window in theaters, as opposed to being released to Disney+ at the same time like other 2021 offerings. He said the film was intended to debut in a “much more healthy theatrical environment,” but it was too late for the studio to alter its release strategy amid the recent surge in cases due to existing distribution agreements.

“On ‘Shang-Chi’, we think it’s actually going to be an interesting experiment for us because it’s got only a 45-day window for us,” he elaborated. “So the prospect of being able to take a Marvel title to the service after going theatrical with 45 days, would be yet another data point to inform our actions going forward on our titles.”

At the same event, however, Chapek defended their hybrid strategy to release films in theaters and on Disney+ Premier Access simultaneously amid “Black Widow” lawsuit. “These films were conceived during a time when…we certainly didn’t know about COVID,” he said on Thursday. “Just like what we’ve done many times before, we’ve found ways to fairly compensate our talent so that, no matter what, everyone feels satisfied.”

“Shang-Chi” follows the title character, who is the child of Wenwu (played by Tony Leung), better known as the Mandarin (not the fake version played by Ben Kingsley in “Iron Man 3“), who is the leader of the Ten Rings, a terrorist group whose existence was teased in the very first “Iron Man” movie. When Shang-Chi is drawn into the clandestine Ten Rings organization, he is forced to confront the past he thought he left behind.

The movie is directed by Destin Daniel Cretton and is set to open in U.S. theaters on September 3.