In “Roma,” the Mexican director Alfonso Cuarón uses a large canvas to tell the story of lives that some might think small. A personal epic set in Mexico City in the early 1970s, it centers on a young indigenous woman who works as a maid for a middle-class white family that’s falling apart. Cuarón uses one household on one street to open up a world, working on a panoramic scale often reserved for war stories, but with the sensibility of a personal diarist. It’s an expansive, emotional portrait of life buffeted by violent forces, and a masterpiece.

Few directors tell large-scale stories with as much sensitivity as Cuarón, whose filmmaking style has grown more exhilarating as the expressive realism of his breakout movie, “Y Tu Mamá También,” has been channeled into the restrained ostentation of his fantasies “Children of Men” and “Gravity.” In “Roma” he has further refined his style by marshaling various narrative strategies, including cinematic spectacle. Many directors use spectacle to convey larger-than-life events while reserving devices like close-ups to express a character’s inner being. Here, Cuarón uses both intimacy and monumentality to express the depths of ordinary life. 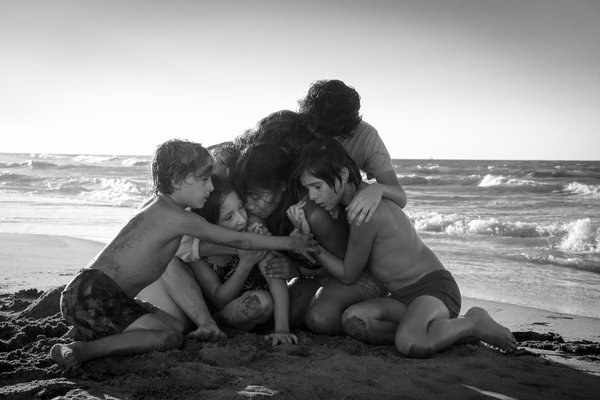 “Roma” shares its name with a neighborhood in Mexico City where families live behind locked gates, and where maids, cooks and drivers busily keep homes running. In one such house, Cleo (the newcomer Yalitza Aparicio) lives with and works for a multigenerational brood that scarcely seems capable of doing anything without her. In the morning, she wakes the children; at night, she puts them to bed. From each dawn and until long after dusk, she tends to the family and its sprawling two-story house. She serves meals, cleans away dog droppings and carries laundry up to the roof, where she does the wash in view of other maids on other roofs with their own heavy loads.

The movie opens in 1970 with scenes that establish Cleo’s everyday routine and, by extension, the parameters of her life. Much of the movie takes place inside the house (a re-creation of Cuarón’s childhood home), which is flanked by a gated, open-roofed passage filled with bicycles, plants, caged birds and an exuberant, underloved dog named Borras. Cleo and her friend Adela (Nancy García), the family cook, live at the end of the corridor in a tiny, cramped upstairs room. The women are from the same village in the southern state of Oaxaca and fluidly slip between Spanish and Mixtec, their native tongue, as they share gossip and sober news from home.

A series of catastrophes slowly upends the stability of this world, starting with a business trip the father takes that proves calamitous. There’s also an earthquake, a shattered window, an unexpected pregnancy, death and betrayal. In one of the most astonishing sequences, Cleo and the family’s grandmother, Señora Teresa (Verónica García), watch a student demonstration turn into a police riot through the window of a furniture showroom. Cuarón doesn’t identify the incident — known as the Corpus Christi Massacre of 1971 — but fills in that day with visceral, harrowing flashes of chaotic violence, including a pietà-like image of a woman crying for help while cradling a dying man.

Cuarón served as the director of photography for “Roma,” and his work here is astonishing. He shot the movie in black-and-white, large-format digital, creating images that have extraordinary clarity, detail and tonality, with entire rainbows of gray, black and white. Like Cleo, the camera is often mobile, anticipating and following her movements like a faithful companion. Cuarón is conversant in Hollywood storytelling but here he also makes expressive use of the kind of tableau staging — arranging people in the frame — that is more familiar from art cinema. By letting a scene play out without much editing, he lets us see how each of these characters inhabits these specific spaces.

[This film made our best movies of the year list. Read about our critics’ other picks.]

Although “Roma” is autobiographical, Cuarón doesn’t explicitly announce it as such. The family’s four children — a girl and three boys, one presumably based on the director — tend to blur into a cacophonous, charming little mob and you catch their names only in passing. The father (Fernando Grediaga) first appears onscreen in a series of cubistic close-ups — a pack of cigarettes and a lighter, two hands casually holding a car wheel — that suggest he isn’t wholly present or knowable. The lumbering Ford Galaxie that he meticulously coaxes into the narrow corridor, inching forward and back, a car mirror nearly brushing a wall, suggests his isolation from a family that he soon abandons.

The mother, Sofía (Marina De Tavira), is more present, though still less so than Cleo, the children’s surrogate parent. Sofía is unfairly berated by her husband and she, in turn, rebukes Cleo, a chain of exploitation that Cuarón represents coolly, occasionally letting a camera movement — a pan of the immaculate house — comment for him. “Roma” doesn’t have a strong story; there are no inciting incidents or mysteries to solve. Instead, in scene after scene, Cuarón creates a fine-grained vision of a woman and a world shaped by a colonialist past that inexorably weighs down the present, most conspicuously in a surreal interlude filled with guns, servants and a conflagration.

Cuarón’s authorial voice becomes progressively more conspicuous through his visual choices, his staging and camerawork. Much happens, but in fragments that slide together as the family and larger sociopolitical forces come into focus. In an early meal scene, one of the boys casually mentions seeing a soldier fatally shoot a kid who was throwing water balloons at an army jeep. He begins speaking over a close-up of Cleo’s hands as she prepares a plate of food, an image that makes the brutality feel quotidian. In another scene, Cuarón punctuates a shot of the parents and children watching TV with one of Cleo seated next to them on the floor, a child’s arm draped on her body.

Cuarón wrote as well as edited “Roma”; he folds just enough exposition into ordinary-sounding conversations to keep you tethered and doesn’t step on the story by overcutting it. You don’t necessarily know who the children in lederhosen are in one sequence, but their outfits, casual wealth and taxidermy menagerie could fill volumes. Mostly, he speaks through his visuals, particularly the camerawork that alternately articulates his and Cleo’s points of view. You see what she sees and also view her from a distance, but at times — as in a scene in which she wades into violently crashing waves, the camera steadily moving parallel with her — the movie seems to embody her being.

This is a stunning sequence that’s viscerally terrifying and emotionally overwhelming. Yet it also invokes the oceanic feeling of a being at one with the universe that dovetails with a climactic family road trip. You feel both Cuarón’s presence and Cleo’s in this vision of her determinedly pushing against the threatening waves, an image he has dredged from the past and made alive through memory. “Roma” is dedicated to Liboria Rodríguez (“for Libo”), the woman who raised him in a house like the one in this movie, where every so often you can see a jet passing overhead, a vision that points to a distant, peripatetic future, even as it suggests that Cuarón never left this place, its women and its love.

An earlier version of this review misspelled the model name of a car. It was a Ford Galaxie, not Galaxy.